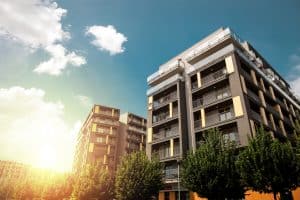 Great attention has been paid to the plight of would-be home buyers in finding affordable housing. But renters face many of the same difficulties, and for much of the same reasons, according to a new study published in mid-June in the journal Housing Studies.

And as a result, renter mobility has declined by 25 percent since 2010 to a record low, the study’s authors maintain.

The current housing crisis isn’t being fueled solely by unaffordability, writes the chief author, Dowell Meyers, director of the population dynamics research group in the Sol Price School of Public Policy at the University of California. It’s also caused by a sharp downtown in local mobility, fewer purchases, slower construction and an influx of young renters who compete for an already limited pool of apartments.

Together, Meyers says, these factors “are constricting the flow of available rental vacancies within major cities and driving local mobility to record low levels.”

Meyers, along with co-authors JungHo Park and Seongmoon Cho, maintain that problems occur when residents don’t move as regularly among rental properties, resulting in fewer vacancies for brand new renters. By disrupting the “vacancy chain,” the rental market in particular and the housing market in general become gridlocked.

“It doesn’t matter if an individual wants or needs to move,” the authors write, “because the space just isn’t there. If it is, competition for it is greatly intensified.”

Said Meyers: “The nation’s current housing crisis has many dimensions, but mobility constriction deserves new recognition as a factor that’s having a huge impact…Our analysis shows a striking reversal of local-level mobility trends in the U.S. after the Great Recession, compared to the preceding decade.”

Co-authors Park and Cho are, respectively, a USC Price postdoctoral scholar and a USC Price Ph.D. student in urban planning. The Price School of Public Policy’s mission is to improve the quality of life for people and their communities.

The greatest mobility declines occurred in metros with a heavier concentration of young Millennial adults in their late 20s and 30s, largely because the sheer number of people in that population cohort create even greater competition for the scarce supply of housing units.

This was especially true in Los Angeles, the country’s second largest metro market, where renter mobility rates fell by 3.6 percent from 2010 to 2019. That’s nearly twice the national average decline of 1.9 percent, the authors found.

The research also confirmed that the slow pace of new construction in both the for-sale and rental sectors and the resulting lack of inventory for home buyers plays a significant role in the log jam at the very bottom of the housing market.

“The future of home buying due to (the) lack of existing housing stock and soaring prices is diminishing opportunities for renters,” said co-author Park. “The net effect is that would-be buyers who can’t buy are clogging up the rental market, leaving fewer openings where people can move, which is adding to the housing market gridlock.”

Again using Los Angeles as an example, the researchers found that the share of households there who made the switch from renter to owner was just 1.8 percent, whereas the national figure is 2.9 percent. Worse, LA’s mobility shift is down 0.4 percent from 2010. That’s only a slight decline, but a decline nonetheless.

But there are much greater declines in other big cities. The largest was in Las Vegas, the nation’s 29th largest MSMA by population, where the mobility rate slipped 5.8 percent between 2010 and 2019. Austin, the 28th largest MSMA, was close behind. Over the 10-year study period, the mobility rate in the Texas hotspot fell 5 percent.

The “new era” of the “unexpected, sharp mobility decline at the local level” underscores the call for renewed attention to that phenomenon “as opposed to migration,” the researchers concluded. “Unlike longer distance movers, who are predominantly employment driven, local movers express housing motivations. The natural question is how might the new downturn in mobility be entwined in the post-recession housing crisis?”

For now, though, they argue that mobility constriction “deserves new recognition” as one more facet of the broad housing crisis that has diminished housing well-being.