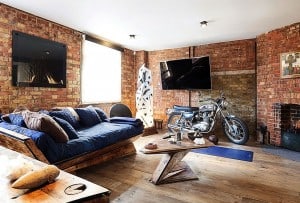 Look across New York City and you’ll find all manner of structures — stables, churches, factories, warehouses — being converted to residential use. With a building stock dating back centuries and high demand for developable land, the city and surrounding region is a natural spot for these sorts of conversions.

And in a market where it sometimes seems the sole imperative is to cram as much apartment into as little space as possible, adaptive reuse can allow (or force) developers to add some idiosyncratic touches to their buildings.

Take, for instance, Six Cortlandt Alley ($6 million to $9 million), a five-unit condo conversion of a former corset factory and furniture showroom from Megalith Capital Management and Imperial Development Group. In the course of work on the project, the developers uncovered original details like granite archways, and stone walls and timber that they’ve incorporated into the new building.

“We actually have several locations within the building where you can see the original fabric of the property,” says Ryan Kaplan, a partner at Imperial. “We wanted to remind people from the moment they step into the building and up until they get to their apartment that there is a history here that can’t be replicated in a new building.”

At West Village building the Shephard ($1.4 million to $29.5 million), Naftali Group maintained original features like barrel-vault ceilings, and brick-and-granite detailing when it carved 38 condos out of the 19th-century industrial building.

Those details, Naftali EVP Matt Van Damm says, are the sorts of things no developer would take the trouble and expense to re-create from scratch.

“Even if we could, it would be cost prohibitive to rebuild it exactly as it was,” he says.

Uptown, at 140-142 W. 81st St., CMC Development Group and Epstein Development Group are converting the 19th-century Mount Pleasant Baptist Church into a five-unit condo where apartments will feature grace notes from the building’s past like its stained-glass rose window and gabled roofs.

“It’s something you would never see on a new building,” says architect Jordan Rogove, partner with DXA studio, which is handling the conversion. “But it creates a very special and interesting space.”

Decisions forced on builders of the past can prove a boon for developers today, says David Robinson, an architect with Newark-based Studio for Urban Architecture & Design, which is working on several projects in that city’s Ironbound district.

One is a conversion of the former Murphy Varnish Works factory to a mixed-use development featuring 46 rental units. Robinson noted that the lack of artificial lighting required that the original structure, which dates to the mid-19th century, be built in a way that maximized natural light.

That makes it perfect for residential development today, he says. “Modern buildings are very deep, but old factory and mill buildings were made so they could get natural light into the space. So they are laid out perfectly for residences.”

Thicker floors and walls used in old construction can also make for quieter living, Van Damm says. “You try your best to address [noise issues] in new development, but you’re not going to pour a concrete slab two or three times thicker than you have to.”

Prime Manhattan Realty’s Robert Dankner represents Tribeca property 17 Leonard St., the onetime stables for the Knickerbocker Ice Company. The owner is in the midst of turning the 161-year-old building into an 11,500-square foot single-family home, repurposing the stables as the entrance to an underground three-car garage.

“It’s going to be a garage with a lift that will go down two levels where there will also be a wine cellar and cigar room,” Dankner says, adding that the design will preserve some of the original wood and steel beams.

Adaptive reuse can be a mixed bag, though, Rogove says, acknowledging that while such projects are catnip to architects, developers have cause to be more circumspect.

“It . . . leads to better design and more interesting spaces,” he says. But, “the fact that these spaces are different from everything else on the market — there’s arisk in that, too.”

There can also be an additional expense, Rogove adds. “When you talk to developers on these projects, maintaining a landmarked facade or other portion of the building can be an expensive proposition,” he says. “So I think that when these guys are doing their pro formas and trying to assess if they want to get involved in a project, it might price a number of them out. It’s not for everybody.”

“You never have enough time or enough diligence to be able to truly uncover some of the unforeseen things [that will arise in a conversion],” he says.

Of course, sometimes, as at Six Cortlandt, the surprises can be happy ones.

“There are a lot of things we discovered that we had no idea were there, but became features of different amenity spaces or units,” Sidhu says.

A structure’s past can be felt in more fundamental ways, as well. Naftali’s Van Damm notes that unit layouts at the Shephard expanded to fill the building’s size.

“The building is a lot bigger than it would have been if we had built new construction on the same site,” he says. “We realized pretty quickly that we were going to have a lot of extra space, so our floorplans became a lot more generous, more similar to prewar.”

At Parkhill City, Chetrit Group’s 476-unit rental conversion of Mary Immaculate Hospital in Jamaica, architect David West had to shave parts off of the existing structure while adding to other sections to make for more conventional apartment sizes.

“We had to work with some areas where the building was shallow and some where it was much deeper than normal for a residential building,” West says. “Where that became extreme we actually sliced off pieces of the building and put them back where they would make a better dimension.”

While residents typically enjoy historic touches, developers shouldn’t go overboard, Dankner cautions. “I think it’s important not to go too far,” he says. “There are functional, modern elements that most people expect; you don’t want to fool with them to preserve the architecture.”

The ideal, he adds, is to achieve “the charm of what was there, but seen from ‘a distance.’”