New York City council members are pushing to increase the minimum temperatures in residential rentals to stem the use of space heaters that led to a fire that killed 17 people in January. 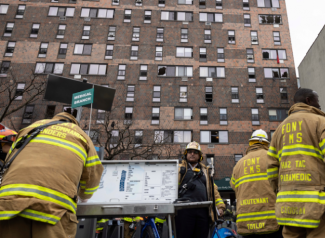 Portable heating appliances have been linked to at least 20 New York City fires in 2020 and 2021, according to the Fire Department of New York. If the bill is passed, the city’s minimum temperature would exceed the 68-degree recommendation by the International Building Code, a model for residential building regulations adopted by cities across the U.S. New York’s minimum temperatures are lower than Philadelphia, Washington, D.C. and Boston. New York last raised its minimum nighttime temperature requirements in 2017 to 62 degrees from 55 degrees.

“The tragic fire in the Bronx earlier this year, where 17 innocent lives were lost, exposed the reality that many New Yorkers live with little to no heat throughout the winter months,” said Brooklyn City Council member Crystal Hudson, who introduced the bill in March. “As a result, tenants are forced to wear coats indoors, use faulty space heaters, and leave their oven on just to keep warm.”

Still, landlords are pushing back. Some caution that increased heat would jack up the price of rent for tenants, particularly as energy prices increase. They say expending more energy would lead to higher greenhouse gas emissions and would be inconsistent with the 2019 Climate Mobilization Act, a law that capped emissions at large buildings.

“It’s the equivalent of an unfunded mandate,” said Deborah Riegel, a partner at Rosenberg & Estis, a law firm that represents some of the biggest landlords in New York City.

Riegel said raising temperatures won’t prevent deadly fires. Instead, she said policymakers should focus on enforcing current rules and passing federal legislation that would require the installation of heat sensors at federally-owned housing developments. For instance, the Housing Temperature Safety Act of 2022 would allow federal, state, and local housing administrators to assess heat levels in real time and alert authorities to unsafe conditions. The act was referred to the House Committee on Financial Services in January.

“This a compliance issue, not a conceptual problem,” Riegel said. “There are already laws on the books that would have mitigated the damage of the Bronx fire.”

Hudson said her bill alone would not prevent deadly fires, but would be a first step to address “the chronic lack of sufficient heat so many tenants experience, which forces them to use dangerous means to heat their homes.”