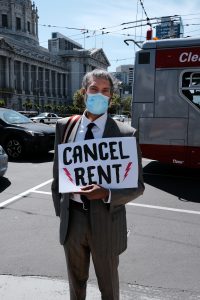 The state plans to pause its Emergency Rental Assistance Program for struggling New Yorkers on Sunday, alarming housing advocates who say the decision will unnecessarily turn away renters in need. The news comes as a majority of members from New York’s Congressional delegation sent a letter to the U.S. Treasury hoping it honors the state’s request for an additional $1 billion in federal funds to relaunch the program.

Beginning on November 14th at 10 p.m., the Office of Temporary and Disability Assistance, the state agency that had doled out ERAP funds, will no longer accept applications from renters, according to an announcement on Friday. The agency will only accept applications from struggling renters if they earn above 80% of the area median income, which comes out to roughly $86,000 for a family of three. That program relies on a separate pool of funds first set aside by the New York State Legislature in September.

Following the decision, the Legal Aid Society issued a statement condemning Hochul for allowing the application site to close to all but a few counties outside the city that had not exhausted their funds. Judith Goldiner, the attorney who heads the Civil Law Reform Unit at Legal Aid, called the move “premature,” saying that closing the application portal to low-income tenants “will traumatize our clients still in need of these critical funds.”

The bulk of applications have come from the five boroughs. As of two weeks ago, about 190,000 New York City renters or landlords have applied for the program. That’s out of 250,000 statewide, according to Legal Aid.

Ellen Davidson, another Legal Aid attorney, noted that other states like California have opted to keep their application portal open as they seek more federal funding. “It seems to me the best way to demonstrate the need is to show how many have continued to apply week by week,” she said.

Davidson said Legal Aid staffers got wind of the news that the state was planning to close the application portal several weeks ago. They were informed that state officials did not want to offer tenants “false hope,” an explanation that Davidson did not make sense to her. She said Legal Aid had suggested language the state could use on its application site that would make it clear that tenants could still apply but that funding would be pending future federal approval.

ERAP was introduced early this year after Congress approved a federal stimulus package to help Americans financially recover from the pandemic. While New York City received direct federal aid, officials worked with OTDA to administer the funds. But a total of $2.4 billion has either been allocated or earmarked, with over $1 billion paid directly to 81,000 renters whose landlords agree to enter the program in exchange for not evicting them for at least a year.

The rest of the funds, about $1.1 billion, have been set aside for 84,000 landlords whose applications are still being processed, according to the OTDA.

With the state exhausting ERAP’s funds, 17 members of New York’s congressional delegation sent a letter to the U.S. Treasury on Friday on behalf of Hochul’s request for more funds. Hochul’s office found that the state will need an additional $996 million to maintain the program for the next four months. It’s unclear, however, when the U.S. Treasury will respond to the letter.

“As New York continues to recover from the economic impacts of the pandemic, hundreds of thousands of New Yorkers face significant rental debt and are at risk of housing instability,” read the letter. “We strongly urge the Treasury to prioritize the State’s request as the reallocation process moves forward and urge you to provide New York with the additional resources needed to continue providing critical relief through its emergency rental assistance program.”