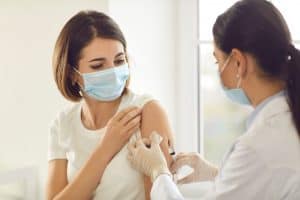 In the few days after President Joe Biden’s administration issued a rule requiring large employers to implement vaccine mandates, the legal challenges have come fast and furious — at least a dozen, including one resulting in a stay issued by the 5th Circuit Court of Appeals shortly after the new rules were announced Thursday.

But this state of uncertainty and lack of clarity around corporate vaccination requirements isn’t something any industry, especially commercial real estate, should count on going forward, experts told Bisnow.

Commercial real estate’s unique role in managing other workplaces, and surfeit of client-facing roles, suggest any such mandates that survive legal challenges will require significant planning and resources. It may also add one more challenge to a difficult labor situation, especially in sectors like property management, construction and development.

“Companies need to have policies and programs in place, and it’s a good idea to go ahead and get in front of that,” said JacksonLewis Managing Principal Joanne Lambert, a lawyer who specializes in commercial real estate, employment and Covid-19. “It’s an especially good idea for commercial real estate, because they have a unique position as an industry managing the office buildings where people work, meaning they’ll have a unique impact with regards to these mandates.”

Drawing upon the ability of the agency to create an Emergency Temporary Standard for vaccinations during a global pandemic recognized by all levels of government and the World Health Organization, the administration’s mandate says employers with more than 100 employees must require Covid-19 vaccination and provide time off for testing for those seeking exemptions, and dictates who must be masked in the workplace. Employers ignoring such rules would be fined, up to $13,653 per serious violation and $136K for repeated violations.

The rule came down from the White House via the Occupational Safety and Health Administration, and despite it being the first such federal mandate in the nation’s history, enacted during a time of increased personal freedom and autonomy in society, it has a good chance of being upheld, according to Drake University associate professor Denise Hill, a public administration expert who wrote the book Vaccine Mandates in the Health Care Workplace: A Legal Analysis for Employers.

Most firms nationwide will move ahead with action or preparations around the ETS, Hill and other workplace analysts expect, regardless of the next few weeks and months of debate, because deadlines are approaching fast and the cost of inaction will eventually be prohibitive.

“Firms shouldn’t be waiting until Jan. 4 with their fingers crossed,” Hill said.

Based on a Bisnow survey of commercial real estate brokerages and construction firms to gauge their vaccine mandate plans, both industries appear to be in a holding pattern, awaiting more clarity around the legal challenges.

“You’ve seen this over the last couple of months, nobody wants to take a risk, so everyone is playing a wait-and-see game,” said Daniel Stillman, a facilitator and executive coach who helps companies design communication strategies. “I feel like people who work at companies want a transparently communicated, reasonable policy that allows them to plan their lives. People who care about reasonable communication and planning, most of them want to get the vaccine.”

Bisnow asked many of the largest commercial brokerage firms about their status on vaccine mandates — including CBRE, Savills, Newmark, Cushman & Wakefield and Marcus Millichap — and only two responded. JLL declined to comment, while Toronto-based Avison Young pointed to its already-public vaccination policy, which required that all North American staff need to be fully vaccinated by Oct. 31 or present regular evidence of negative tests to “work within any of our offices and client premises.”

Other firms within the industry, such as Redfin and Related Cos., have already announced vaccine mandates for their employees.

Some analysts have argued compliance with, and getting ahead of, such a mandate may be a competitive advantage in talent recruitment. With so many tenant- and client-facing roles within CRE, there is additional pressure around abiding by mandates to keep customers, in addition to staff, safe.

The apartment and property management industries in particular are weighing the potential loss of staff due to vaccine refusal or hesitancy with the ability to tell tenants that their entire workforce is vaccinated. American Apartment Owners Association Director of Marketing and Education Alexandra Alvarado said membership is sharply divided on the issue.

“Some owners and operators definitely have a fear of finding adequate staff to support the operations they have, especially leasing agents, maintenance and those interacting with tenants,” she said. “Others think about the optics and want to be as safe as possible.”

The Biden mandate also included an exemption for remote workers, which raises the question of whether CRE, with many sales and broker staff spending significant time outside the office, can perhaps be classified as remote if and when the mandate goes into full force. Hill finds it unlikely that large swaths of staff will be reclassified to avoid vaccinations, or at least cost-prohibitive: Every time someone returns to the office, they would need to get tested on the employer’s dime, which could quickly add up for sales and tenant-facing positions.

There is still some confusion over exactly how such a scenario would work, since the rules are so new, so it remains to be seen how complicated such a decision would be. Based on a previous Bisnow analysis of real estate job ads, it appears most positions being advertised expect more face time with the boss; 77% of ads analyzed in July expected workers to come back to the office.

The organizational and planning challenges for CRE firms around vaccine mandates aren’t just internal issues; the industry may also see significant fallout from mandates in the form of a reduced construction workforce, which already faces significant labor shortages and recruitment challenges.

Of the larger construction firms queried by Bisnow — including Bechtel, Fluor, Turner and AECOM — only Skanska USA answered questions about its vaccine mandate policy, noting that it has followed public policy guidelines thus far through the pandemic, and “subject to the outcome of pending court challenges, Skanska will continue to follow all federal, state and local public health orders, including those released by the Safer Federal Workforce and OSHA’s recently published Emergency Temporary Standard.”

The Association of Builders and Contractors has previously spoken about the challenge of encouraging vaccination within the industry, as well as the potential labor shortages it may cause.

“This guidance will result in additional compliance burdens, exacerbate the construction industry’s skilled workforce shortage and increase costs for federal contractors and taxpayers,” Ben Brubeck, the ABC’s vice president of regulatory, labor and state affairs, said upon initial release of the mandate. “This is a top issue for the contracting community and adds to a list of concerns.”

Challenges in the construction industry, and vaccine hesitancy among rank-and-file employees, could be especially damaging for those firms covered under federal contractor regulations. New Biden executive orders rolled out in September have ordered all employees of federal contractors and subcontractors be vaccinated, unless they have a valid exception, which could significantly impact firms with government contracts, or those seeking infrastructure bill spending.

With multiple challenges to the mandate, court watchers expect objections will be combined into one case and likely heard at an appeals court chosen at random later this month.