Home·Property Management·The Moratorium Is Over, But ‘Eviction Blockades,’ Exhausted Relief Have Landlords At Wit’s End

The Moratorium Is Over, But ‘Eviction Blockades,’ Exhausted Relief Have Landlords At Wit’s End 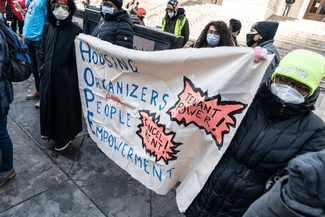 Filings for residential evictions in New York are still a fraction of their pre-pandemic numbers, even without a moratorium in place. But housing advocates and landlords are preparing for a steady increase at housing court — with both sides gearing up for a fight.

Brooklyn tenant advocate Esteban Girón, who said he has an eviction filing lodged against him, has shifted his focus to trying to keep people in the homes by any means possible since the moratorium lifted Jan. 15. Those means include what Girón calls “eviction blockades.”

“A blockade is basically when the case has gotten all the way to the end of the line, and essentially, when a marshal was scheduled to come to remove you from the home, people will basically block the entrance to an apartment or the house,” he said. “They’ll get arrested.”

Girón’s group, the Crown Heights Tenants Union, has been working to protect tenants before and during the pandemic, but their urgency is growing.

“There’s just no way that people are going to be able to pay everything that they owe,” he said. “I just don’t see how you can stabilize an economy with people not in their homes.”

Landlords in New York City lodged 895 eviction filings the week of Jan. 16, the first week after the moratorium lifted, according to Princeton University’s Eviction Lab. Last week, it tracked 839 filings, though processing delays can sometimes mean that figure is undercounted. The week before the pandemic — March 15 until March 22, 2020 — there were more than 2,000 filings.

While thousands are now at risk of eviction since the moratorium expired, the feared deluge of cases hasn’t eventuated. At least, not yet.

“I foresee cases ramping up gradually over the next number of weeks,” said Alexander Lycoyannis, an attorney with Rosenberg & Estis who is providing counsel on evictions to landlords with tenants owing rent. “My broad advice is you shouldn’t expect anything to happen very quickly, but you have to assert your rights.”

A confluence of reasons has kept filings down, Lycoyannis said, but many of them are temporary. First, landlords have to give nonpaying tenants 14 days to pay up before moving to evict, and there are still some provisions protecting tenants suffering hardship.

In many cases, landlords have reached arrangements with their tenants and managed to secure rent relief funding, though that pool of money is now exhausted.

“If you push forward and you get a case into court, you can at least try to force some kind of resolution to the issue,” Lycoyannis said.

The backlog of eviction filings — including some that predate the moratorium — is so great that landlords could be waiting an average of eight to 10 months before a physical eviction could even take place, Community Housing Improvement Program Executive Director Jay Martin said.

Some tenants stopped paying rent at the start of the pandemic and are now tens of thousands of dollars behind in rent, a sum many will never be able to pay back.

“There’s no benefit to a property to get an eviction in that case. Because even if they were to get eviction, that would be dealing with an empty rental unit and then debt,” Martin said. “What’s a much more beneficial situation to both parties here is to work with the government to provide as much relief as possible to match up in court.”

Clarence Hamer, who owns a two-family rental property in Brownsville, said he took a tenant to housing court for nonpayment just before the pandemic, but when the moratorium was imposed, he wasn’t able to take any further action even though a trial date had been set. The tenant, he said, remained in the apartment without paying rent.

In September last year, he said he discovered they had been illegally subletting the apartment. They left of their own accord, but Hamer said he is owed tens of thousands of dollars that he will never get back. 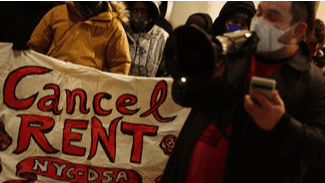 Hamer lives upstate and bought the Brownsville property as his first-ever real estate investment, but now he plans to sell.

“I’m not going to be a landlord in the city of New York. I can’t. I’m just defeated,” he said. “The plan was to give it to my kids, but I’m so far behind in mortgage payments that I’m forced to sell in order to recoup any type of loss.”

Landlords argue that court is a matter of last resort, and going before a judge is how people who are truly in need are separated from those who are trying to game the system.

“The reality is that that housing court is where problems are solved,” said Rent Stabilization Association Executive Vice President Frank Ricci, a lobbyist for landlords of apartment buildings. “So if a tenant is on hard times, that’s where they can be hooked up with some kind of social program.”

Applying for the federal rent relief funding is automatic protection from eviction, but not everyone who makes an application is eligible.

“It’s not a free money giveaway to anybody who’s fallen behind,” Ricci said.

But with apartment rents skyrocketing — as much as 40% in some cases in New York City — there is a big motivation for landlords to get people out if they can, Legal Aid Society staff attorney Ellen Davidson said.

“The idea that my clients are choosing not to pay when they’re at risk of being out on the streets is nonsense,” she said. “Our clients borrowed money from family members and even unsavory sources, they put rent on credit cards, they went without food for themselves, without medicines they needed trying to pay rent.”

She added she’s worried about the impact of the increase in filings.

“As we see more and more people evicted, we will see more and more people having nowhere else to go … Our homeless shelters are going to start packing people in,” she said. “To the extent possible, we’re trying to keep them in place, but we’re talking to them about having to find other housing. It’s just that there isn’t a lot of affordable housing out there.”

Martin said some landlords have forgiven rent to keep tenants in place — though they wouldn’t advertise that, as it implies they can afford to “cancel” rent.

His lobbying group’s main focus has been advocating constantly to pressure the government to provide more relief.

“We are seeing that people who have received [Emergency Rental Assistance Payments] have gone right back to not being able to pay their rent,” he said. “So there’s a real problem now that the government must address and whether or not these people can genuinely not afford the rents or they have long-term job loss. Either way, ERAP is probably not going to be the long-term solution.”

Already, landlord attempts to remove tenants show the courts are pushing tenants to apply for rent relief, rather than evict. A New York Office of Court Administration spokesperson told The Real Deal the expectation is that if a tenant doesn’t have representation in housing court, judges will help find other options aside from eviction.

Even though the rental aid program is out of money, tenants can still apply for it in the hope more funding will become available. Gov. Kathy Hochul has requested some $1.6B in federal funding for rent relief. Already, the state has paid out $1.3B to landlords out of the $2.4B that the U.S. Treasury provided. Hundreds of millions haven’t been released, because of red tape and landlords refusing the aid, NBC reported.

But a request for extra aid is little comfort to someone like Cynthia Brooks, who has owned a four-unit property in East Flatbush since 2014. She made a request in October for relief funding for landlords who had tenants leave without paying rent, but she is still waiting for the money to show up.

She said she managed to execute on evictions that had been filed and decided on before the moratorium was in place, but said she has gone without rental income for months on end.

“I don’t know any landlord who’s out there, saying, ‘Oh, yeah this is an opportunity to throw people out for just no reason at all, Oh money, money, money, money!’” she said. “No one does that, that’s a cartoon character.”

She has just one tenant in the building, and she said it will be difficult to find a renter who she can rely on to pay the rent. She has been pulling on cash reserves she put away to meet expenses, but if she doesn’t fill the building soon, she will have to sell it.

“I am on my last forbearance,” she said. “I might have a couple of months. I can afford to start paying the mortgage back, but then after that it has to be sold or I’m going to be in a situation.”

Hers and Hamer’s are the kinds of scenarios that LISC NYC Executive Director Valerie White has feared. She said many owners in areas like East Flatbush and Brownsville are people of color.

“This is their first opportunity to start to grow wealth through homeownership and they depend upon that rental income to make their mortgage payments,” said White, whose organization supports affordable housing and economic development in underserved areas. “We are potentially seeing people who would gain wealth from homeownership that can be passed on through generations being eradicated here.”

She said the eviction moratorium was important to protect tenants, but it was not met with the same amount of mortgage support.

“I predict there’s going to be a huge drop in minority homeownership in New York City because of that,” she said.