Chicago-based R2 Cos. has identified another kind of historic structure that can provide a new source of units: Masonic temples.

“Membership has dwindled in the past 20 years, but they still own a lot of great real estate,” R2 Cos. Director of Acquisitions Zack Cupkovic said. 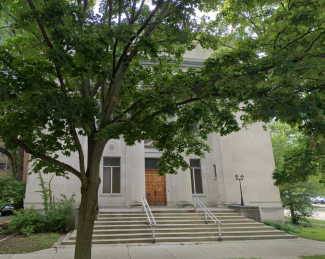 The firm just bought the Evanston Masonic Temple Association building at 1453 Maple Ave. in north suburban Evanston, a 1928 structure designed by famed Chicago architect John Holabird. The adaptive reuse specialist plans to renovate it into an apartment building with about 20 to 24 units.

R2 Cos., which is also tackling the renovation of the Morton Salt Packaging Warehouse on Chicago’s North Side into The Salt Shed, part of a new 4.2-acre mixed-use district, paid a little more than $1M for the Masonic property, Cupkovic said. It plans to spend about $5M converting it into multifamily.

The building was never vacant, he added, which will make the reconstruction process easier.

“It was functioning as a Masonic temple until three weeks ago,” he said.

More than 4% of U.S. men were Freemasons in 1959, but membership in the fraternal organization declined 75% since then, a National Public Radio report found.

Buying a Masonic temple can involve surprises. Cupkovic said R2 officials once found a sword after opening a closet, as well as an old sculpture of Benjamin Franklin.

This won’t be the first time a North Shore Masonic temple got a remake.

BK Development Group is transforming the former Masonic temple at 1010 Central Ave. in nearby Wilmette into an apartment building with 16 units reserved for seniors, according to a report in Patch. The four-story building is being gutted, but the art deco exterior will be preserved.

“They’re going to want us to do it because our plan is to both save the building and keep the building’s envelope the way it is,” he said.