Home · Property Management · Real Estate Investing · Making it in the Bay: How the Bay Area’s Housing Crisis Spiraled out of Control 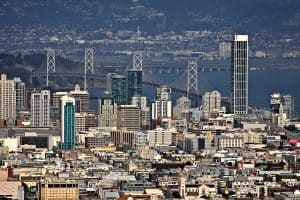 The Bay Area’s housing crisis, which has spiraled out of control, can be traced back to before the start of the tech bubble — all the way to the 1970s when local cities were starting to boom, and taxes were rising with them.

Then came the game-changer: Proposition 13.

“It restrained how much local government could raise property taxes each year,” said Tim Iglesias, a professor at the University of San Francisco School of Law.

Prop 13 caused cash-hungry cities to zone more land for commercial use, so they could collect more sales tax. That meant more retail was going up, instead of dense housing.

“…and then then there’s the problem of increased costs to build housing,” Iglesias said.

Then, there’s Big Tech and the influx of all those workers to the Bay Area.

“Because they make a lot of money, they bid up housing prices, and so that has created an increase in housing prices as well as gentrification,” Iglesias said.

No city in the Bay Area has seen the rapid remaking of neighborhoods quite like Oakland has. Construction cranes are often present, working on the latest sleek apartment building where studios might start at a little under $3,000.

Below those very apartments the streets are lined with tents and RVs, the last resort for those who’ve been priced out.

“We have systematic failures to create adequate affordable housing for our hard-working families, and that is something we must change,” said Oakland Mayor Libby Schaaf.

The Bay Area’s housing crisis is a slow-moving storm that’s been churning for decades. In the eye of the storm, middle-class families strive to achieve the American Dream of owning a home.

He and her partner didn’t just rely on a bank to help buy their home. They asked family and friends to pitch in.

“We really had to utilize our community, our family, to help us come up with 10% of the down payment,” He said.

“When the middle class cares about something, politicians pay attention,” he said.