Oakland is Officially More Expensive for Renters Than San Francisco 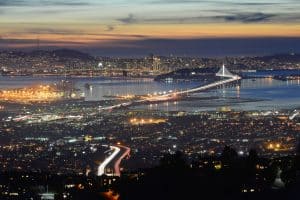 San Francisco’s infamous expensive rents are not a secret. Over the last few years, as the tech industry thrived in the Bay Area, demand drove the prices up. But now it’s a different story with the pandemic. In the past 18 months, San Francisco residents have moved to more affordable areas thanks to new work remote policies.

The trends are now showing the consequences of this small exodus — San Francisco’s two-bedroom rents are officially less than in Oakland.

For the first time in a long time, Oakland surpasses San Francisco in more expensive rents. San Francisco has seen an almost 12 percent decrease in two-bedroom rents since March 2020 compared to July of this year.

You can currently find a two-bedroom in San Francisco for $4,759 per month on average. In Oakland, the average rent is $160 more.

In March 2020, at the beginning of the pandemic, Oakland trailed behind San Francisco with nearly a $900 difference in average rent for two bedrooms. Between May 2020 and April 2021, Oakland experienced significant rent drops. In January 2021, it was at its lowest — a 27 percent drop since March 2020.

Since then, it’s started to climb again. Between January and July, two-bedrooms rents have gone from $3,400 to nearly $5,000 per month on average. Overall, an 8 percent increase since the start of the pandemic — that’s $400 more on average.

The third-largest city in the Bay Area, Oakland has attracted residents over the past year that are looking for more space to work from home and, at the time, more affordable rents. However, with newcomers from San Francisco, many residents worry they will get pushed out by increasing rents.

At its peak in March 2020, San Francisco’s two-bedroom average rents hovered around $5,395 a month. However, immediately after the following quarantine, the city started to see a decrease in two-bedroom rents.

Month over a month saw small increases until August 2020. Between August and March of this year, San Francisco saw an average decrease of 23 percent in two-bedroom rents.

Rents struggled to get back up for the rest of 2021, landing in July 2021 at $4,759 per month on average. Overall, San Francisco saw a nearly 12 percent decrease in two-bedroom rents since March 2020. One-bedroom apartments also trended down with a 39 percent decrease overall.

In the last year, news headlines shared an exodus from the Bay Area due to the pandemic, with many residents looking for more affordable pastures in other counties or states. According to an Oxford Economics analysis, upwards of 24,300 residents left the Bay Area last year.

Some residents with lower incomes went inland in California to find more affordable homes, both to rent and buy — with Merced, CA leading the way.

As more tech companies in the Bay Area start going fully remote, two-bedroom rents in San Francisco may continue to decrease as demand flattens. The Bay Area as a whole may continue to fluctuate as the pandemic rages on and employees continue to take advantage of more affordable options elsewhere.

Oakland’s average rent may continue trending up as demand increases for bigger spaces and work from home policies are extended.