Families Built Treehouse Rentals in Their Own Backyards for Extra Income 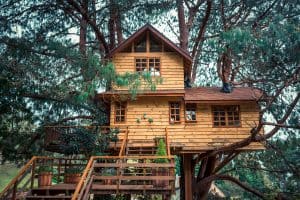 See how they leaned into both the tiny house movement and the gig economy’s short-term rental boom by building and renting out treehouses.

After being laid off during the pandemic, Will Sutherland, 37, decided to build a treehouse in his backyard. “It was pure energy and excitement,” Sutherland says of the project he began in August 2020 and completed this March. Sutherland previously worked 60 hours a week for more than a decade as an audio-video technician. Now, his take-home pay comes from his backyard.

Sutherland is part of a treehouse movement made even more popular by treehouse reality shows such as Treehouse Masters, a show that aired on Animal Planet from 2013 to 2018, and DIY Network’s current Treehouse Guys.

“There’s a treehouse revival, which has been occurring over the last twenty years—and arguably much longer,” says Kevin Mooney, who founded the International Treehouse Association and Mohican Treehouse Resort. And many of those who’ve joined the movement are earning income from their backyard treehouse homes in the sky as part of the gig economy’s short-term rental boom. Treehouses are also part of the larger tiny-house industry; a home is considered a tiny house if it is less than 400 square feet.

Below, discover Sutherland and four other families who have turned treehouses into backyard businesses.

Sutherland spent nearly seven months building the cozy West Virginia treehouse, which is supported by two trees. “I carried every piece up there by myself; the roof trusses, the floor trusses,” he says of the 165-square-foot treehouse with a queen bed and a small sleeping loft.

While Sutherland’s treehouse only debuted on Airbnb in March 2021, he’s already booked weekends through November 2021 and has had more than 30,000 views.

“It blew my mind,” says Sutherland, who also built a fire pit and outhouse for guests to use. The treehouse doesn’t have a bathroom but has running water in a gravity-fed sink. There’s also a bathhouse built on the back of the host’s home with a conventional toilet and shower.

Using upcycled windows and cedar from a neighbor’s home project, Sutherland spent $15,000 on the project, an amount he expects to recoup well before the end of the year. The four-season treehouse has a queen bed, as well as an air-conditioning unit and an electric heating unit. There’s a staircase entry and an emergency exit ladder in the back.

“I always prioritize not altering the lay of the land,” Sutherland says, adding that there was no concrete laid as part of the build.

Julio Torres, 57, designed and built his treehouse in 2017 as “a gift to my son Julian,” who was 7 years old at the time. In fact, it was Julian who picked the location of the mango tree on the family’s property in Rio Grande, Puerto Rico—located in the only tropical rainforest in the United States.

Torres, a lawyer and construction contractor, spent a year and a half building the treehouse with the help of a team of friends. After the treehouse survived Hurricane Maria in 2017, Torres started renting the treehouse to guests. Called El Yunque View Treehouse for the National Forest it overlooks, the tiny house has panoramic views.

“It’s unlike any other house I’ve ever seen—after all, there’s a mango tree growing through it!” wrote Jen Ruiz, a travel blogger who stayed in the house in 2019. The two-story has five skylights, a full bathroom, a full-sized bed, air conditioning, and more.

“In less than a year, our treehouse was such a success that it became one of the top three rental properties in Puerto Rico for short-term stays,” says Torres.

On a lark in 2015, Susan Leopold applied to the Treehouse Guys TV show to have builders construct a treehouse on her 220-acre farm. “I’ve always been a passionate tree climber,” says Leopold, who envisioned “an apothecary in the trees” on her vegetable and herb farm that borders the Appalachian Trail. The show set her up with Barefoot Treehouses out of Washington State.

On a tight budget, Leopold encouraged the builders to use salvaged wood found on the property. Leopold, who is the executive director of United Plant Savers, notes that using salvage was a priority for her. She adds that Trillium Treehouse “reflects the natural habitat” around it.

After the novelty of the treehouse wore off for Leopold and her three children—now 18, 16, and 14—she listed the treehouse on Airbnb. Within a year, she had recouped the initial cost to build the 500-square-foot treehouse.

In 2007, Elizabeth and Marty Canfarelli bought land in the Shawnee National Forest in the southernmost tip of Illinois. Five years later, they retired from their building and construction careers in the Chicago area and built a house for themselves, then two treehouses on the 120 acres located in rural Hardin County.

They were looking for a way to supplement their retirement income in their own backyard, Elizabeth explains. “Both of us had always been fascinated with treehouses,” she adds. “It’s a childhood fantasy … I’m a big believer in going back to something simpler. Climb up a tree and listen to birds.”

Still, it was well before the treehouse craze and while they were sure a treehouse would be unique, they were not sure people would rent one out to sleep in as an experience. Nearly a decade later, though, the Canfarellis are convinced. Their treehouses are fully booked, even on weekends in the dead of winter.

“Marty and I did the majority of the work—planning, clearing, building, and landscaping, but it was really the whole family that made all of this a reality,” says Elizabeth.

The Treehouse at Moose Meadow

Willie Docto and Greg Trulson’s backyard treehouse was built by a non-profit design school in nearby Waitsfield in 2012. The treehouse sits between two pine trees on 86 acres in the Green Mountains of Vermont.

“It was done organically. There wasn’t a plan that we bought,” says Docto of the treehouse, which has 31 windows. “We came up with a pretty nifty two-story treehouse.” There’s a queen bed in the loft, a kitchen, an outdoor shower, a staircase that wraps around a maple tree, and a wraparound deck overlooking a pond and the woods.

“Originally, we were going to have the treehouse built for just the two of us,” says Trulson. But the pair are already innkeepers who have lived in and run the Moose Meadow Lodge for two decades—so they added the treehouse to their list of accommodations.

It’s now a licensed bed and breakfast—the first treehouse in the state to hold this honor—filled with homemade furniture designed and built by Trulson from wood he found on the property. Guests can get “tree service” (breakfast) delivered to the treehouse in the morning.

“You are isolated with nature in luxury,” says Docto of the treehouse. And the most common guest reaction? Docto says the words guests use to describe their treehouse experiences are “awesome and magical.”