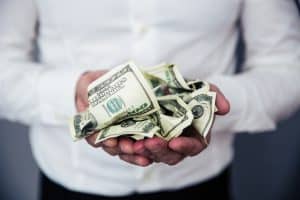 On a recent Sunday afternoon, dozens of New Yorkers lined the narrow hallway of an East Village building. Most had arrived early for the open house, which promised a one-bedroom apartment on the fourth-floor of a walk-up priced at $2,2000 per month. An air of desperation, familiar to many pre-pandemic showings, hung in the air.

The real estate broker explained the terms, unmentioned in the listing: On top of first month’s rent and a security deposit, the tenant would be expected to pay 15% of the annual lease for her fee. After plugging the figures into a calculator, one prospective tenant balked at the nearly $4,000 figure, then requested an application anyway.

“You could make a lower offer,” the agent deadpanned, “but then you probably won’t get the apartment.”

After a whirlwind couple of years, the broker fee has come roaring back from its pandemic-induced absence. Several real estate agents said they were now collecting higher commissions than they did before COVID, shouldered almost entirely by tenants.

David Rosen, a veteran broker with Douglas Elliman, recounted a “sudden flood of humanity” returning to the city, allowing brokers to collect one-time payments that seemed unfathomable even a few months ago. He described the hefty commissions as “distasteful” to discuss, but added, “Most brokers are having their best year ever.”

The real estate rebound has surprised some industry experts, who predicted a lagging market well into 2022. Instead, as employers order workers back to the office and students return to in-person learning, landlords are reportedly yanking back deals and hiking rents by as much as 70%.

Increasingly, those with apartments in the most desirable neighborhoods — which also saw the largest share of COVID move-outs — are also declining to pay the cost of broker fees.

“Owners are trying to recoup their losses,” said Adjina Dekidjiev, a broker at Warburg Realty with 25 years of experience. “Compared to 2018 and 2019, there are fewer owners paying fees.”

“I’ve seen a lot of cycles in the market,” she added, “but nothing like this.”

“Exploitation of the housing shortage”

Broker fees may be a fact of moving in New York City, but they’re unheard of just about everywhere else in the country. In most cases, renters work directly with property owners or managers to secure an apartment. When brokers do get involved, their fees are paid by landlords.

Tenant-paid fees — a relic of pre-internet apartment hunting — were largely expected to disappear with the rise of online listings. Much to the chagrin of renters, they’ve hung around.

But that long-established system was nearly upended in February of last year, when a state regulator interpreted recently passed rent laws to mean that owners should have to pay the fees. The tenant victory was short-lived; within weeks, the Real Estate Board of New York and several big-name brokerages sued to obtain an injunction, and the ruling was officially overturned earlier this year.

(REBNY’s position on the matter has evolved significantly over the last century; back in 1945, after hearing reports that some brokers were charging a full month of rent in fees, the powerful real estate board condemned the apparent “exploitation of the housing shortage” and warned its members to refrain from “exorbitant brokerage charges.)

Even after the broker fees were quickly made legal, their resurgence wasn’t felt, as the pandemic forced desperate landlords to cover the fees in order to lure tenants into empty apartments.

During the month of April, fewer than 20% of apartments required tenants to pay a broker fee, according to data provided by StreetEasy. That proportion grew to about one-third this month, and was significantly higher in trendier neighborhoods of Lower Manhattan: More than half of all apartments in the West Village and 69% of those in SoHo now come with a broker fee, in line with pre-pandemic figures.

Jonathan Miller, the president of the real estate appraisal firm Miller Samuel Inc, noted that the size of a broker fees was closely correlated to an apartment’s demand — and thus largely disconnected from the amount of work that a broker might put into finding a person a home.

“The market isn’t consistent,” he noted. “We have bidding wars and long lines in some neighborhoods, and we have apartments that are renting for less than they did a few years ago in others.”

Wayne Baumann, an independent broker who works across the five boroughs, had another explanation for why broker fees were so high in parts of Manhattan. With thousands of brokers competing for listings in the city’s most popular neighborhoods, he said, property owners and managers now expect a cut of whatever fee a tenant provides to their agent.

“They know they have a hot commodity and they’re looking for kickbacks,” he said. “If you don’t show some reciprocation financially, they won’t even look at the application.”

“There’s always someone willing to pay a premium”

For some New York City tenants, broker fees can seem more like a shakedown than an earned commission. That feeling was only intensified by the lifting of a state restriction early on in the pandemic, which previously forced brokers to physically show a home in-person.

Without that rule in place, some tenants are now being asked to pay thousands of dollars to an agent they’ll never meet, whose apparent contribution to the transaction was texting a code to a lockbox outside the apartment.

In particularly egregious cases, brokers may “double dip,” effectively collecting a fee from tenants who don’t know that the landlord has already paid the commission.

“It’s not completely uncommon, though it’s discouraged,” said Rosen, the broker at Douglas Elliman. “You can imagine in this environment that some people do everything they can to collect every penny they can. There’s really very little regulation.”

“It’s not a perfect system, but it is the New York system,” he added.

Defenders of the practice note that, if tenant-paid broker fees were made illegal, landlords would likely bake the cost into monthly rent. They argue that brokers have a wide range of unseen responsibilities, such as fielding calls and emails, taking cabs to far-flung locations, and handling huge amounts of paperwork — particularly for apartments that receive a large number of applications.

“She was happy to pay the fee after I explained how things work here,” Dekidjiev said. “There’s always someone willing to pay a premium.”

Read more
Amenities go wild at...
As part of your rent at the new $300-million apartment building called Kurve on Wilshire, you can get...
Read more
4 Signs the Hot Housing...
This year’s housing market has been high-stakes. Prices skyrocketed, bidding wars were rampant and,...
Read more
5 Things Landlords...
Here's how landlords can prep for 2022 -- and whatever it may bring. Key Points Landlords...
Read more
Detroit leaders call...
DETROIT — Public officials and leaders in Detroit are calling for policy changes and programs to...
Read more
Proper Documentation...
This article was contributed by the Fair Housing Institute.  Why is documentation so important? How...
Read more
5 Industry Trends That...
The rental property market changed a lot in the past year and shows no signs of slowing down. While...
Read more
Most CRE Firms Mum On...
In the few days after President Joe Biden's administration issued a rule requiring large employers...
Read more
New York To Suspend...
The state plans to pause its Emergency Rental Assistance Program for struggling New Yorkers on Sunday,...