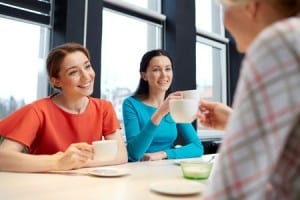 As with any gathering of competing companies, the air could have been tense. That was hardly the case, however, as many took the opportunity to not just get to know each other, but also to discuss how they can strengthen the industry.

The Women of Student Housing is a new group of female professionals seeking to contribute to the greater good of student housing. The gathering at CampusConnex was the second in recent months, following a launch hosted by RealPage that took place at the National Multifamily Housing Council’s student conference.

At CampusConnex, the atmosphere was relaxed and centered on moving the organization forward.

“It’s not about who you work for, it’s about empowering women and letting the barriers down,” said RealPage Vice President of Student Housing Whitney Kidd. “During the meetings, you’ll see people from rival property management companies talking and laughing together. We look at how we can help each other.”

Providing women more opportunities to be heard in rental housing

Similar collaboration is happening in other parts of the rental housing industry. About a day’s drive from Orlando, a group of women assembled at the Ritz-Carlton Hotel in New Orleans for an inaugural vacation rental industry women’s summit.

Hannah Lau Zarley, vice president of operations for Kigo, said the unification comes at a time when women are changing the face of the industry through diversity and the roles they play. Last year, Zarley joined Hinote on Lodgify’s list of 19 women who are making an impact in the vacation rental industry.

One goal of the collaboration is to provide women more opportunities to be heard. Zarley notes that women are typically less visible on event panels discussing industry trends and practices.

“[At RealPage], our objective is to bring the smartest and most influential women in the industry together to inspire and empower each other and discuss important topics,” said Zarley.

The Women of Student Housing group will launch a mentorship program at NMHC’s student conference this fall in Chicago. They are also developing a philanthropy program designed to give women who wouldn’t normally have an opportunity to start their own business the resources to go out on their own. The program could include underprivileged women in under-developed countries.

Leading the industry in empowering women

RealPage has been the industry leader in empowering women to excel and is making a name for itself in that arena. Texas Diversity Magazine recently named RealPage executive vice president and chief operating officer Ashley Glover to its inaugural Dallas Power 50 award. The award was given to women who are proven in innovation and accomplishments in their fields, and their ability to be role models. The magazine gave a similar award for women in Houston.

Additionally, RealPage plans to award two individuals – whether onsite personnel or vendors – scholarships for the upcoming RealPage Student Summit April 23-25 to learn more about the industry.

At the event, women will connect and further explore “how we can promote and encourage each other, and how we can grow bigger and better.”