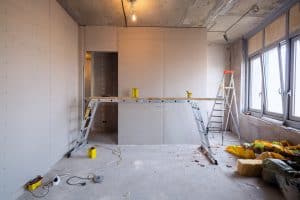 Steven Leidner, who has lived in a one-bedroom corner unit at the Hamilton on the Bay apartment tower in Edgewater for 18 years, sensed something was up when his lease was up in November and noticed the building’s new owner had added a provision to their leases.

“I noticed an early termination clause that wasn’t there before,” said Leidner, 66. “I asked the building’s manager about it and he said ‘Oh, we would never kick you out. We’re in the business of generating revenue from renters. This is only if we need to move you into a different unit in the building while we are doing renovations.’”

Leidner said he asked the manager to include that wording in the lease but was told no. After consulting with his attorney, Leidner went ahead and signed the lease for $1,760 per month, minus a monthly discount of $264 to make up for all the noise and clamor caused by the ongoing renovations.

“I have a disability and I couldn’t expose myself to COVID,” he said. “I was not in a position to go all over town looking for a new place. But I was always waiting for the other shoe to drop.”

That shoe came in the form of a letter from Aimco/AIR, the Denver-based company that bought the 28-story bayfront building at 555 NE 34th St. in Aug. 2020 for $80.9 million. The letter, which was slipped under the door of tenants and sent via certified email, informed every resident in the building their leases were being terminated on July 16, 2021, so the company could complete renovations that had been ongoing since Hurricane Irma in 2017.

Those previous renovations, however, had been repairs to fix the water damage caused by the storm, removing mold, replacing carpeting and the installation of new windows. The new renovations being done by Aimco involve the gutting of all existing units in the aging building and the improvement of common areas to make the property more competitive with the shiny new luxury towers that have sprouted around Edgewater.

“Unfortunately, the redevelopment project has reached a phase where renovations will impact your Apartment Home and will block access to it,” the letter reads. “In accord with the Termination Option of your lease, we must terminate your lease and ask you to vacate your apartment home on or before July 16, 2021.”

The roughly 200 existing residents at the building, who occupy around 130 of the building’s total 265 apartments, are claiming Aimco pulled a bait-and-switch when they signed new leases with the owner, who they say enticed them to renew their leases early by offering 18-month agreements instead of the usual 12.

But the new lease also included an early termination clause, something the leases by the previous management company, Bainbridge Management, did not.

In an email to the Herald, Stephanie Joslin, spokesperson for Apartment Income REIT (AIR), the management division of Aimco, said the Hamilton’s tenants are receiving relocation assistance such as discounted moving expenses, brokers billed at the company’s corporate rate and an opportunity to move into one of the other buildings the company owns, such as the Waterways Village Apartments in Aventura.

“Aimco has worked with residents one on one to learn of their individual situations and meet their needs,” Joslin wrote. “We know that moving is never easy and we will continue to work with residents individually to address their unique circumstances.”

Hamilton on the Bay was built in 1984 by Ted Arison, founder of Carnival Cruise Lines, long before Edgewater was a trendy neighborhood crammed with high-rises. The building was considered luxurious in its day, but the explosion of new development in the area has rendered it into something of a relic.

The neighborhood’s proximity to downtown Miami, Wynwood and the Design District has turned the area into a magnet for residents and developers. Since early 2013, more than 115 parcels measuring 72 acres have sold for $605 million, according to the real estate data firm CoStar.

David Winker, the attorney representing the Hamilton residents, said Aimco is not being fair to its tenants by giving them such a short window of time to find a new place to live and move out.

“The owner lied to residents to get them to terminate their existing leases and enter into new leases with an early termination clause, and then immediately sent eviction notices,” he said. “This ‘bait and switch’ shocks the conscience and we are calling on the owner to do the right thing and work with residents to make sure everyone has time to find a new home and move. If not, the owner will be explaining its cruel lies and unlawful actions to a judge.”

After meeting with the building’s tenants, Rep. Frederica R. Wilson (D) wrote a letter on June 4 addressed to Duke McLarty, director of government and community relations for AIR.

In her letter, Wilson argued that the tenants “made it clear that they are not mentally or financially prepared to move out by the given deadline as it would create an extreme hardship.”

▪ Provide those tenants an allowance of at least $22,500 per unit to cover move-in costs and living expenses;

▪ Do not evict residents who are unable or unwilling to move and honor their existing leases;

▪ Pause the ongoing construction at the building until the evicted tenants move out;

▪ Give first dibs to existing tenants when the remodeling is complete, as well as pay for their move-out and subsequent move-in expenses.

But some tenants say they have received little to no help at all. Colette McCurdy-Jackson, who has lived in the building since 2015 and shares a two-bedroom unit with her daughter, said the building’s manager never responded to her request for more information about the Aventura location. Her lease expires on June 30th and will not be renewed.

“I haven’t even processed it,” said McCurdy-Jackson, 54, whose husband passed away in September. “I don’t know where to begin. My husband used to handle all of this stuff for us. I’m a highly educated woman and I don’t know what to do.”

McCurdy-Jackson said that when she asked the building manager why tenants had been given such short notice, he said that the company would work with everyone on an individual basis but if they had offered a 90-day window to vacate, people would take 120 days instead.

Many of the building’s tenants are new parents or elderly, and several are recovering from surgeries and medical procedures that makes it difficult, if not impossible, for them to move right away, McCurdy-Jackson said.

Adrian Madriz, executive director of the affordable and sustainable housing group SMASH, organized a press conference Tuesday with many of the Hamilton residents in attendance to bring attention to their plight.

“The renovation Aimco has been doing on empty units has been so noisy that people can’t work from home,” he said. “There has been neglect on the quality of life of the people who are living there. Now they’re claiming they have to do some intensive work on the plumbing in the building. Why would they want to get rid of everybody and not collect rents for a year?”

But the Hamilton’s prime bayfront location, along with the increasing popularity of Edgewater, was bound to radically impact the building at some point, say real estate experts. According to the Miami Downtown Development Authority, the population in Edgewater has grown from 5,841 in 2000 to its current 7,580.

Many of the neighborhood’s old single-family homes and shabby apartment buildings have been replaced by new construction. The ultra-luxury Missoni Baia Residences tower, where some condos are priced at more than $4 million, is scheduled to open there this year.

“The rents at Hamilton on the Bay are clearly way below market,” said Chris Zoller, broker associate with Berkshire Hathaway HomeServices EWM Realty. “The company that bought the building are professional and sophisticated landlords, and there are not many buildings left in Edgewater that are strictly rental. The building is not in tip-top condition but the rents have been kept low. Now the landlord needs the people out. It’s a business decision and they have rights as property owners. The tenants can find something. It’s not going to be as nice or on the water, but they’ve had it nice for a long time.”

Others believe the situation at the Hamilton building is the inevitable result of gentrification, but that the tenants should be given more time than 60 days in order to find a new place to live.

“Property owners are creating a totally new neighborhood, whether they’re tearing something down or rejuvenating it,” said Jesse Dean-Kluger, founder of the Miami-based law firm Jesse Dean-Kluger PA. “Older tenants are being faced with this issue. To tell people their neighborhood has outpriced them, even though they have lived there for 10 years, is tough. But people shouldn’t be kicked out of their houses. To say ‘We’re making this building beautiful and you need to get out of here’ is wrong.”