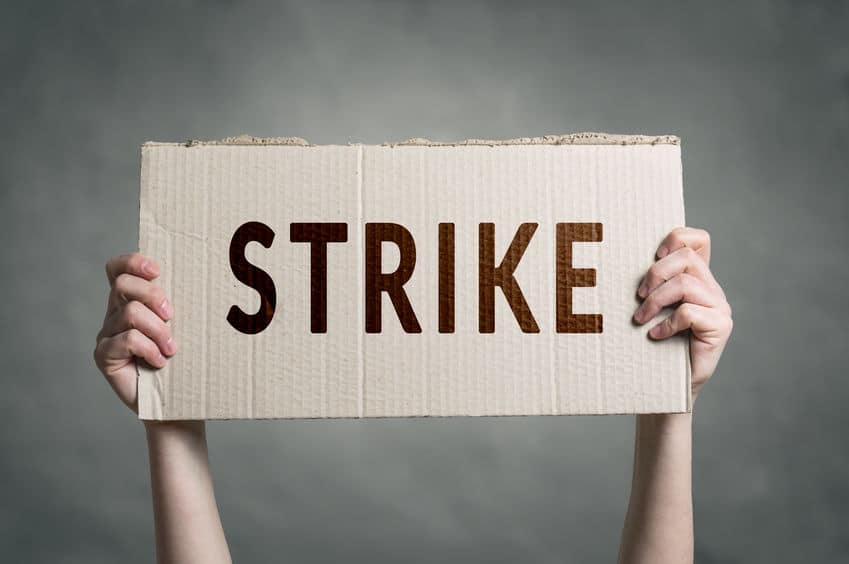 April rent checks are due today, but tenants in cities across the U.S. say they won’t pay, either due to economic hardship or to increase leverage for political demands.

In California, Illinois, New York and Missouri, organizers are urging tenants to pay for basic necessities before rent, creating tools to support renters who are unable to pay or are planning to strike, and using the coronavirus crisis to give force to demands for rent suspensions and stronger renter protections.

Those in multifamily real estate are closely monitoring the situation, waiting to see what the rent shortfall will be.

But some landlords aren’t waiting: they’re preparing for an existential fight.

“Renters pay landlords, and landlords pay property taxes and mortgages. That ultimately all filters back to large international financial institutions. Landlords are on the bottom of a chain of responsibility that enormous banks are one top of,” said Brian Bennett, an organizer with Democratic Socialists of America in Chicago. “It will collapse downward, not upward.”

In New York, a tenant union that organizes South Asian renters in Queens is preparing to go on a rent strike today.

At least 100 households across 40 buildings organized by the Bangladeshi Tenant Union (BTU) will not pay their rent in April, because they are unable to pay or because they decide to withhold their checks. Members of the group, many of whom are Lyft or Uber drivers, saw a significant decline in their income as early as February, according to Rima Begum, who co-founded the BTU.

“They don’t deserve rent in general,” said Begum, of Zara Realty, the landlord of the buildings where most of the members in her group live. “It is empowering, even though it had to come to this point.”

According to Begum, Zara has not reached out to its tenants to make financial arrangements, and tenants have experienced lack of heat at night in recent weeks — a measure which she believes is in anticipation of the rent strike.

A spokesperson for Zara said the health and safety of its tenants and staff is a top priority, and the firm is working out payment plans with tenants and complying with the eviction moratorium.

“We need to pay utility bills to keep the lights on, pay staff to continue cleaning our buildings and make necessary safety repairs, as well as pay our mortgage and property tax obligations so that we can continue to provide safe, quality affordable housing for tenants,” a spokesperson for Zara said.

Andrea Shapiro, of the Met Council, said that retaliation from landlords is expected should a rent strike happen. But this is not a typical scenario, she underscored.

“A traditional rent strike is against your landlord for demands,” Shapiro said. “But the landlord is not the target — we need [New York Gov. Andrew] Cuomo to act. This is a mass non-compliance action.”

The Met Council, along with manufactured home owners and statewide tenant coalition Housing Justice for All, is pushing Cuomo to issue a rent and mortgage suspension. The group is releasing a “toolkit to safely go on rent strike” today, according to a HJ4A spokesperson.

In an informal survey Met Council conducted with its membership, 75 percent of 300 respondents indicated they would have trouble paying rent in April. In New York, 95,000 people filed for unemployment insurance in the two weeks prior to March 21, according to the Department of Labor.

Tenant organizers are urging renters who can’t pay to join up with others in their buildings, rather than strike alone — both because of safety in numbers, and to increase the visibility and strength of the action.

But social distancing poses a logistical problem for organizers, who can’t knock on doors, hold meetings in lobbies or have rallies as they normally would.

In California, the Los Angeles Tenant Union (LATU) is organized into local chapters, which keep in contact with their members and respond to inquiries. The LATU’s newly-launched campaign, “Food not Rent,” calls on renters to consider paying basic costs before rent — and Trinidad Ruiz, an organizer in the Vermont y Beverly local of the LATU says a general rent strike is a possibility if demands for stronger renter protections are not met.

“The coronavirus calls into question the nature of real estate,” Ruiz said. “That’s why this moment demands a deep political and economic analysis of real estate, of housing, and the relationship between tenants and landlords. It’s not like land is a resource you can multiply. It’s finite. It’s like water. It needs to be regulated. It shouldn’t be used like it is now.”

In New York and Missouri, statewide tenant coalitions are navigating a rapidly-shifting political terrain, and with few points of leverage besides withholding rent, organizers are carefully considering a rent strike.

The bold action is not a given. A west coast politician who called for a rent strike via an online petition was met with little enthusiasm from tenant organizers last month.

In Missouri, the Kansas City Tenants (KC Tenants) is not yet calling for a coordinated rent strike, which differs from “involuntary non-payment of rent,” according to the group’s co-founder, Tara Raghuveer.

“Tomorrow is April 1, and rent is due,” said Raghuveer in a statement. “Thousands across the state will be forced to withhold payment due to lack of income.”

KC Tenants is demanding a rent and mortgage moratorium and immediate measures to house the homeless before calling for an all-out strike.

Tenant leaders have good reason to approach a rent strike with caution.

Such radical actions don’t always turn out well for tenants — in 1971, the decision to push for a city-wide rent strike in New York distracted from the state legislature’s political maneuvering, which had a lasting impact on the city’s housing market. That year, vacancy decontrol passed by one vote and was signed into law by Gov. Nelson Rockefeller, allowing apartments for the first time to phase out of regulation. The policy would last in some form until 2019. While that doomed strike is a cautionary tale, according to Mike McKee, a long-time tenant organizer who helped to lead it, the current situation bears little resemblance to what occurred 50 years ago.

“I was a young, inexperienced organizer, and instead of going to lobby in Albany, we decided to organize a city-wide rent strike,” McKee said. “But we never had more than 12 or 15 buildings on rent strike at a time, and every building did it to improve conditions, not for political reasons.”

But due to an economic shutdown driven by the novel coronavirus, whether tenants choose to pay rent or not, “thousands and thousands” will not be able to because they have lost income.

“Who knows how many tenants will not be able to pay rent tomorrow,” McKee said. “And by May 1 it will be a lot more.”

Landlords certainly hope their tenants pay rent, but some are taking more proactive steps to ensure the checks arrive.

Nativ Winiarsky, an attorney at Kucker Marino Winiarsky and Bittens, whose family also owns about 1,000 units in New York across 40 buildings, said the threat of a rent strike should be a “wake up call” for elected officials. He urged the government to take measures to provide relief to both landlords and tenants.

“The impact would be catastrophic,” said Winiarsky of a rent strike. “Since there is no [multifamily] mortgage forbearance, a landlord would not be able to make any payment during a strike. The entire system is susceptible to collapse — for us to think of these matters with a short-term vision is irresponsible.”

In the event of a rent strike, Winiarsky is advising his clients to take swift action to protect their assets, despite the 90-day eviction moratorium. Collective action, which tenant leaders are urging, could also give power to a legal claim that the financial viability of a building is threatened, according to Winiarsky.

“Landlords need to issue rent demands,” said Winiarsky. “If enough tenants do not pay rent, placing the financial viability of a building in jeopardy … a landlord could file an emergency application to the court, seeking to allow it to commence cases … so that when the eviction moratorium is lifted, the landlord will be armed with warrants.”

“If the tenants are aware the landlord has recourse, and they could be evicted after 90 days, they’ll rethink this highly destructive idea of a rent strike,” continued Winiarsky.

To assess the impact of coronavirus and the eviction moratorium on its bottom line, landlord group Community Housing Improvement Program will conduct a survey of its members this week. Its executive director, Jay Martin, said the group is not just looking to gauge the amount of lost rent as a result of the coronavirus, but how many landlords asked for relief, and how much.

While landlords are responding to immediate threats of rent strikes, their lenders are taking a wait-and-see approach, according to Craig Price, a transaction attorney at Belkin Burden Goldman. April’s mortgage payment, in theory, should be covered by March’s rent payments — which were largely left undisrupted by the coronavirus, according to Price. Lenders thus expect mortgage payments to flow through April, and will discuss forbearance options case-by-case based on April’s rent shortfall, which is yet to be determined.

But the real trouble could start later, said Price, and that will require federal action.

“If the banks are the ones left unpaid, then at some point, the government is going to have to help and support the banks. I just don’t know that we’re there yet. We need to see where we are May 1.”