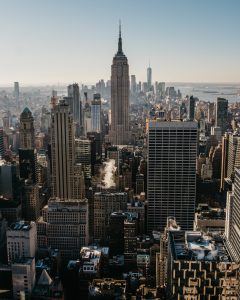 Some people just have their hearts set on fancy, expensive apartments in Manhattan with every convenience and amenity imaginable. But there is an elite group of renters who are on the hunt for the most expensive apartment. And that honor goes to a three-bedroom, three-and-a-half-bath penthouse in Chelsea that will run you nearly 16 grand a month.

Meet Penthouse D at the Beatrice Apartments in Midtown, the most expensive apartment in New York City. Here’s what makes this grand “ultimate space for comfort, luxury and leisure” 54 stories above Manhattan worth so much.

The Beatrice Apartments could not be more convenient. The building is located at the corner of 29th Street and Sixth Avenue. The complex is set inside the 12-square-block swath where the North Chelsea neighborhood overlaps Midtown South. Other Midtown neighborhoods, including the Garment District, NoMad, Koreatown, Flatiron and Rose Hill, are all steps away.

Nearly everything you could desire is just a short walk away. Every variety of restaurant, boutique, café, bodega and bar is nearby. Greeley Square Park is just two blocks away and Madison Square Park is four. The Empire State Building is a four-minute walk, and the Theater District and Times Square are just 15.

The building’s block rates a perfect Transit Score of 100, a “Rider’s Paradise.” Stops for the 1, 2, 3, B, D, F, M, N, Q, R and W subways and PATH trains are within a few-minute walk. And Penn Station is just four short blocks away for access to Amtrak, Long Island Rail Road and New Jersey Transit.

In addition, the location earns a Walk Score of 99, a “Walker’s Paradise,” and a “Very Bikeable” Bike Score of 84. And the property charges no broker fee.

A deluxe apartment in the sky with stunning views

The most expensive listed apartment in New York City is Penthouse D, one of the building’s four penthouses. It occupies the southeast quadrant of the building’s top floor, the 53rd just under the rooftop lounge. The unit features wall-to-wall floor-to-ceiling windows above 6th Avenue, which is officially Avenue of the Americas. The spot offers direct views of the Empire State Building. But if interest in seeing out over Brooklyn and Long Island wanes, the entire unit offers blackout shades.

The three-bedroom and three-and-a-half bath unit stretches over 1,673 square feet in total. Its 10-foot ceilings hover over oak hardwood and porcelain tile floors. Every room has heat and air conditioning with its own controls.

The master suite features a 14-by-18 foot bedroom, a massive walk-in closet and two linen closets. The master bath offers a separate stand-up glass shower and soaking tub and a double-sink vanity. Both the 11-by-12 foot second bedroom and 12-by-12 foot third bedroom feature reach-in closets and their own full en suite bathrooms. All three bedrooms have eastern views out towards the Empire State Building.

The compact kitchen includes high-end stainless steel appliances from Sub-Zero, Viking and Miele and Italian marble and granite countertops. The kitchen island looks out over the spacious 21-by-21 foot living and dining area. And across from the second bedroom is a half bath.

The “sleek, sophisticated and ultra-luxurious” Beatrice Apartments occupy 29 floors of a much taller building. The Beatrice begins on the 24th floor of the 54-story building, with the remainder occupied by the posh Kimpton Hotel Eventi. In all, the 620,000-square-foot building, completed in 2010, tops out at 614 feet in architectural height. That makes the structure the 92nd tallest in New York and 375th in the country.

Community facilities include a private catering kitchen, conference meeting room and fitness center with Peloton bicycles and a yoga studio. But the most prominent amenity is the Beatrice’s exclusive Cloud Lounge on the 54th-floor rooftop just one floor up from the apartment. The combined indoor/outdoor space is perfect for personal or party pleasure, with stunning eastern views all the way out to Brooklyn. Relax on the terrace, or play in the recreation lounge with two 60″ LCD televisions and a Brunswick billiards table.

The entire apartment building is fully pet-friendly and smoke-free. It offers 24-hour staff, including an around-the-clock concierge desk. Services include in-house valet dry cleaning and monthly parking. And the staff host annual Independence Day and winter holiday parties for residents and guests.

What else you could get for that money

Even for a jaded New Yorker, spending nearly $16,000 a month on a Manhattan apartment is a little crazy. But how do you put that kind of expense into perspective? Here are a few other things you can buy each month for the price of this penthouse at the Beatrice.

Make no mistake, even a lousy apartment in New York City will still cost you a pretty penny. But if money is no object, what is one to do if you wish to live in the lap of luxury but this penthouse just isn’t your cup of high tea? Here are five other pricey Manhattan apartments that are slightly more affordable.

Enjoy it if you can afford it

Living in a swank penthouse apartment in Chelsea is the stuff of a rom-com or heist movie. That’s what you’d expect from the most expensive apartment in New York City. It’s a pipe dream for New Yorkers not named Icahn or Bloomberg. So, maybe a walk-up in the Village or a brownstone on the Upper West Side are more your speed.