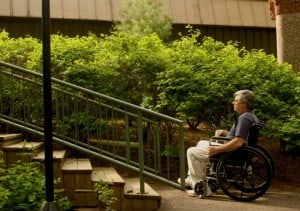 A landlord’s hesitation over accommodating a tenant who became disabled during the term of his lease agreement sparked a charge of discrimination.

HUD announced that it is pursuing a claim for damages against the Albuquerque landlord for failing to allow the tenant to modify the rental home to provide better wheelchair access.

HUD’s position is that refusing to allow tenants to make reasonable modifications at their own expense is a violation of the Fair Housing Act.

The tenant had no disability when he initially rented the home. After developing a serious medical condition that made it necessary for him to use a wheelchair, he wrote the landlord a letter asking if he could have a ramp installed and other modifications made. His request to install a ramp was granted, but other requests, including a request to remove a shower door, install a higher toilet and lower the kitchen sink, were denied.

Read more
The New Age of Amenities
For years, we’ve seen the race to reach renters often start with a building’s amenity package and...
Read more
Remote Work Expected to...
Remote work will fuel housing demand for years to come as people who no longer have to be at their...
Read more
Timeless Structures...
Affordable housing developers have plenty of options when it comes to the type and style of community...
Read more
Search Self-Service...
In the multifamily housing industry, we have seen a mass adoption of chatbots. The self-service...
Read more
40 Cities That Could Be...
The lessons of the 2008 housing crisis are a living memory, and the effects of the recession of that...
Read more
Housing groups organize...
As affordable housing advocates throw paint at the wall to get the federal government to do something...
Read more
Landlord’s...
As the first federal court of appeals to address a challenge to the constitutionality of a...
Read more
City landlords’ tax...
Nothing is certain but death and taxes, and property taxes are no exception. For a year and a half,...