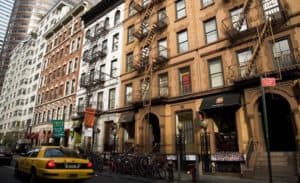 A New York landlord is challenging the right of an adopted daughter to remain in her father’s rent-stabilized apartment for $100 a month.

According to a news report, the unit has been rent-controlled for decades. The former tenant, who died in 2009, had befriended a woman, who was a cat sitter for another tenant in the building.

Just prior to the elderly tenant’s death, he adopted the woman, then in her late 50’s, so she could take over the unit. The two lived together as “father and daughter” for less than a month, far short of the two years required to inherit a rent-stabilized unit, according to the report.

Yet, several attempts to evict the tenant have been thwarted. In the most recent round, the landlord withdrew his petition over a defect, but vowed to file again.

Meanwhile, the “daughter” continues to occupy the unit at the rent-stabilized price.