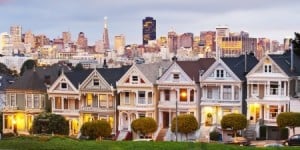 SAN JOSE (KPIX 5) – A Bay Area landlord is fed up with the high cost of living, so he’s moving out. And he’s taking his tenants with him.

San Jose landlord Tony Hicks is fed up with the Bay Area. He’s moving to Colorado taking a houseful of his tenants with him.

It started when Hicks, who owns three houses in San Jose, started worrying about earthquakes.

“All that caused me to think about moving,” Hicks said. “Then the sanctuary state came on. That was kind of like a clue.  And then I said okay, I think I need to go.”

But he didn’t want to leave his longtime tenants, whom he calls his friends, out in the cold. So, he asked them if they wanted to go with him. Seven of them said yes.

Tenant Edwin Blomgren said, “I’m in favor of moving out of California. Of course, I never expected to move in to coal country again.”

They’ll be moving into a four-bedroom home in Colorado Springs that Hicks bought with cash from the sale of his San Jose homes.

Hicks hasn’t raised rents in over a decade.

So for some, the reasons for leaving the Golden State are more economic.

But others mentioned changes in the Bay Area they don’t like.

“To me, San Jose has lost all of its charm. It looks like one ugly strip mall to me now,” McDaniels Setser said.

So while people are leaving California, others are eager to come into the state.

The group plans to set out for their new lives in Colorado next month.