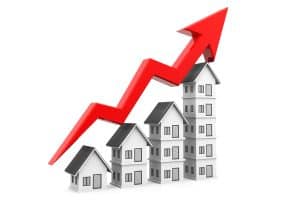 US apartment rent growth is back in a big way, now that the country’s reopening local economies are fueling household creation and stimulating robust demand for all types of housing.

Effective asking rents for US apartments climbed 1.3% in April, rising at the fastest pace seen during a single month for the past decade or so and likely at the fastest pace ever. (RealPage’s long-term performance history for rents measured change by quarter, rather than by individual month.)

This upturn in rent growth arrives right at the beginning of prime leasing season. The vast majority of household moves tend to occur in the time frame from April through September.

April’s strongest rent increases occurred in the luxury Class A properties that had taken a pricing haircut in many cases over much of the past year. Class A communities registered 2% rent growth for the month, compared to increases of 1.3% for the middle-market Class B projects and 0.3% in the Class C inventory.

April’s increase in pricing power proved to be nearly universal across markets, as 145 of the 150 metros tracked in RealPage’s core data set logged at least a little rent growth for the month. Four metros registered no change in rents, leaving just one market—Davenport, Iowa—with a minor cut in pricing.

Among major markets with at least 100,000 units, Phoenix led the way for rent growth during the month of April. Effective asking rents there climbed 2.6%.

Average monthly rent for the US as a whole now stands at $1,453.

Annual Rent Growth Is Solid in Much of the Country

The country’s typical rent now is 1.7% above year-ago rates. Thus, cuts suffered during the early days of the pandemic have been completely reversed in all but a handful of locations.

Annual rent growth now reaches 3% or more, which was the performance seen prior to the pandemic, in 110 of the 150 largest metros.

Year-over-year price increases are at 5% or better in an impressive 19 of the major markets.

Riverside/San Bernardino is in the top spot for annual rent growth, with pricing up 13.5%. Year-over-year rent growth also is in double digits across Phoenix, Sacramento and Las Vegas, all registering price jumps of roughly 10% to 11%.

Rents are up about 9% annually in Tampa and Memphis, while increases of roughly 7% to 8% have occurred in Atlanta, Jacksonville, Greensboro/Winston-Salem, Salt Lake City and Virginia Beach.

At the other end of the performance spectrum, April’s monthly rent bump still leaves prices way under the year-earlier rates in some of the country’s key gateway metros.

Rents are still down 18.3% year-over-year in San Francisco, while the annual price cut is near 14% in San Jose and New York. Seattle’s annual loss is 6%, and the year-over-year declines are at 4% to 5% in Oakland, Boston and Washington, DC. April’s effective rents for new leases dip about 3% below year-earlier rates in Chicago and Los Angeles.