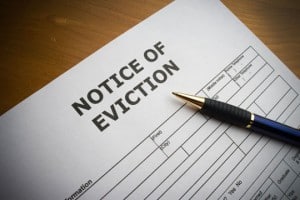 “These are working people, folks who struggle to make ends meet, and before were defenseless if that eviction notice came,” de Blasio said. “That eviction notice was a death sentence for their home, the vast majority of the time.”

Baraka said he wants to begin Newark’s program in September, and initially focus on providing services for the disabled, elderly and people who have entered the U.S. illegally.

He said the program eventually will cost Newark between $750,000 and $1 million, but that while the city is raising the money it will use the services of law firms that have agreed to work on a pro bono basis.

Baraka didn’t specify how the money would be raised to pay for the program.

“We will find a way to raise the dollars to get this done,” he said.

Baraka estimated that approximately half of the 40,000 annual eviction cases filed in Essex County involve low- and moderate-income Newark residents.