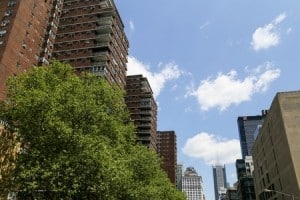 The New York in which I grew up has turned on its ear. No one could have imagined, in 1960 or 1965, that much of the Upper East Side would become an affordable neighborhood. A sign on my desk reads “I live on the Upper East Side because I can’t afford Brooklyn.” Tribeca’s zip code, 10007, holds pride of place as the most expensive zip code in New York City. The Bowery overflows with trendy restaurants and seven-figure condos. It’s hard to find a house in either West Harlem or Bed-Stuy for under $1,500,000. But no change strikes more at the heart of old New York than the decline of the co-op, the traditional form of New York apartment ownership, in which purchasers become shareholders in the building corporation, with a proprietary lease granting them sole use and access to their apartment.

In the 1960s the vast majority of Manhattanites still rented their homes. Only the wealthiest neighborhoods embraced apartment ownership: Park and Fifth Avenues, the wide cross streets like 72nd and 79th, Central Park West, and a few particularly significant buildings on West End and Riverside Drive. The conversion boom of the 1980s changed that; building after building converted to co-op ownership, often evicting renters in the process. This changed the ownership landscape of New York, and enriched building owners in two ways. Conversions brought owners huge profits from apartment sales and provided a continuing income stream for building owners through onerous wrap mortgages at high interest rates. It’s important to remember that in the early 1980s mortgage interest rates fluctuated between 16% and 18%.

At that time the condo phenomenon had not yet sprung fully into being. Early examples of the ultra-luxury building, such as Olympic Tower, built in 1975 on Fifth Avenue, and 52nd Street and Museum Tower, built in 1985 adjoining the Museum of Modern Art, were constructed with an international clientele in mind. It wasn’t until the beginning of the 21stcentury, when Robert A.M. Stern designed the Chatham, on 65th Street and Third Avenue, that affluent New Yorkers began to consider the possibility of new condominium buildings as homes for themselves.

During the past twenty years, the condo concept has flourished in New York City. The Manhattan skyline, penetrated everywhere from 110th Street to Bowling Green by ultra tall, thin condominium towers, resembles a giant pincushion. The vast majority of buyers for these condos are Americans, and a substantial number already live in New York. The amenity packages, high ceilings, and thoughtful layouts of many of these units make them attractive to long time city residents who lack the patience and tolerance to go through the lengthy and invasive co-op admissions process, not to mention the often restrictive renovation rules. As a result, co-op prices decline each year relative to comparable condominiums.

While many buyers still prefer the more solid construction and artful layouts available in prewar buildings, of which the vast majority are co-ops, they feel increasingly resentful about the restrictions these buildings impose. In addition, most co-op apartments need renovation, which fewer buyers have the energy to undertake in this time of dual-income families, especially when brand new condominiums offer a toothbrush-ready alternative.

Given these realities, one would assume that co-op Boards of Directors would be attempting to compensate and retain value for their shareholders by easing admissions and renovation criteria. In fact, the opposite is true. Co-op boards are meant to judge applicants on two criteria: whether the prospective purchasers are financially secure, and whether they will make good neighbors. Nothing else is relevant. But because Boards do not restrict themselves to those two issues, often acting in ways that are either highly personal or illegally discriminatory. Increasing numbers of buyers won’t put themselves through the co-op wringer to be arbitrarily rejected. And now there are, in greater numbers every year, attractive condominium alternatives close by.

I love the grand old prewar co-ops. I live in one, and I wouldn’t want to live in another sort of apartment. But I am increasingly aware, as are many co-op owners, that the difficulty of the admissions and renovation processes discourage many buyers whose interest could help maintain stronger prices. With good alternatives more and more available, it is time for co-ops to join the more enlightened, more diverse, more “woke” 21st century.

Read more
August Rental Data:...
Rent Growth Now Outpaces Home Price Growth Highlights August marks the first month on record where...
Read more
Survey Of Landlords...
A survey of landlords in 10 cities across the United States shows rent collection was down...
Read more
Mom-and-pop landlords,...
It’s been tough to get good data on rent payments during Covid. Dispatches from the National...
Read more
Pandemic and Pricing...
Mid-sized cities near large markets are gaining a greater focus for apartment developers as the country...
Read more
Housing advocates: Weak...
Sylvia Burn warned her landlord multiple times in the last year about the leaks in the ceiling of her...
Read more
Exactly how much have...
The big lease deals and rental concessions that were offered by residential landlords a year ago appear...
Read more
Can We Charge The...
Ask Attorney Brad: We completely remodeled a townhouse apartment, adding granite. After a tenant of...
Read more
Vaccines, return to...
Last year was a strange one for colleges, with many universities going fully remote as the COVID-19...