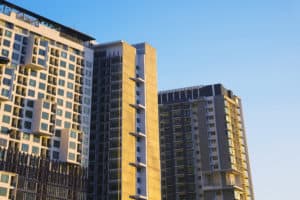 The boom in apartment building in Pittsburgh could spell trouble for landlords of older stock as they try to hold on to renters who find the shiny new units and the amenities that come with them hard to resist.

In a report issued Monday, the CBRE real estate firm found Pittsburgh is in the midst of a supply surge, with about 4,600 units being built within the last three years — more than in the previous 15 years combined.

Another 3,479 units are set to be completed in the next two years. While the rapid uptick may slow rental rate increases — at least temporarily — the biggest impact could be on older apartment buildings, which may have a hard time competing, according to the report.

Some of the vintage buildings are as much as 69 years old. They account for one of the oldest inventories in the Midwest.

As one example, CBRE cited the 2004-built Flats at Southside Works. Occupancy hit 99 percent in 2010 and the average rent peaked at $1.80 a square foot in 2014. Faced with competition from the newer Hot Metal Flats and Southside Works City Apartments, the complex is now 71 percent occupied with rents of $1.73 a square foot, according to the report.

Pittsburgh apartment market at a glance

Pittsburgh is experiencing a boom in apartment building, with 4,600 units built in the last three years and another 3,479 in the pipeline. Here is a look at the rental market in various city neighborhoods. 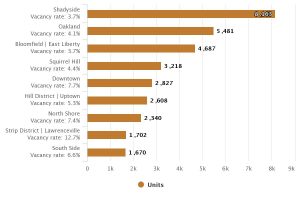 Monthly rent, by neighborhood and size of apartment 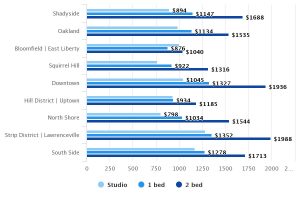 Todd Reidbord, president of Walnut Capital, said the big spike in new units definitely has had an impact.

Walnut Capital has seen both sides of the boom. It has built about 1,000 new units in places like East Liberty and Bakery Square in Shadyside, and it leases another 1,800 older units in the East End.

The company has tried to stay competitive by adding new kitchens, new bathrooms and other amenities to its older units. While Walnut Capital hasn’t experience a significant drop in occupancy, it has become an issue among landlords, Mr. Reidbord noted.

“Unless you have something better to offer in the older apartments, you’re going to be subject to competition from new apartments,” he said.

Mr. Reidbord estimates occupancy at some of Walnut’s older buildings has fallen from 100 percent to maybe 95 percent. While the company may offer rent specials on older units here and there, it has not had to reduce rents as a general rule, he said.

“In talking to the landlords of older buildings, I find that what they are telling me is that occupancy rates are remaining the same but rental rate increases are declining compared to what they have seen over the last five years,” said Jeffrey Ackerman, CBRE managing director.

With so much supply being added or in the pipeline, most are probably holding the line on rents, he noted.

“They will face continuing pressure and they can stay current if they can upgrade the units and offer more amenities. … Clearly owners have to put money back into their properties,” Mr. Ackerman said.

In its report, CBRE stated the building boom has slowed rent growth. The overall asking rent has stayed at $1.54 a square foot the last two years after climbing for most of the last decade. In 2009, the average rent was less than $1.30 a square foot.

Nonetheless, new buildings around the city are still commanding rents in the $2- to $2.50-a-square-foot range, the report stated.

“Quite simply, rent growth slowed in 2017 due to increased supply. Rent corrections are to be expected in 2018, but this will help support a healthy long-term outlook for the urban multifamily market.”

Mr. Ackerman expects rents to level off, with increases ranging in the 1 to 2 percent range. In past years, rents in hot markets like Lawrenceville and Shadyside have been averaging increases of 7 to 10 percent, he said.

According to the report, more than 10,000 millennials have moved to Pittsburgh since 2011. That, coupled with an annual job growth of 1.6 percent, has helped to drive the apartment boom. Millennials account for more than half of all the city’s renters, CBRE found.

Another big driver has been the city’s growing tech workforce. According to CBRE, Pittsburgh had the third highest annual growth rate in high tech employment in the country in 2016.

• More than half of all new apartment units are under construction in the South Side, the Strip District, Lawrenceville and Oakland — neighborhoods that have seen the strongest population growth since 2010.

• More than 40 acres of former industrial property in the Strip and in Lawrenceville have been converted to office or apartment uses, and another 67 acres are facing redevelopment.

• Better values can be found in Bloomfield and East Liberty compared to neighboring submarkets, but that could change as the area continues to improve. The report called Bloomfield the “last remaining piece of gentrification between Lawrenceville and Shadyside.”

• Shadyside is Pittsburgh’s largest and most expensive apartment market, where a one-bedroom apartment in a recently constructed building has an average asking rent of $1,649 a month.