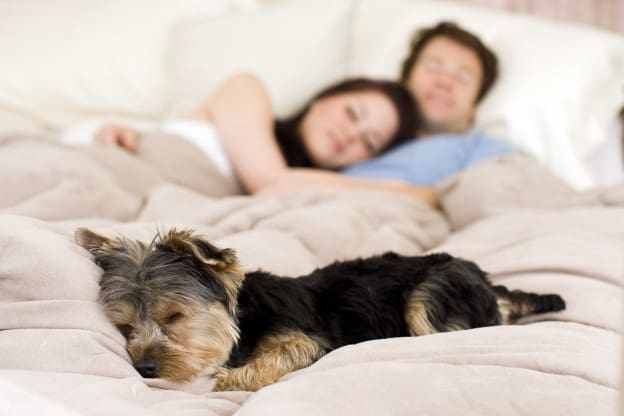 Adam Richardson wasn’t necessarily looking to move during the pandemic. He’d negotiated a rent reduction of more than $250 and even threw himself into a kitchen renovation project in the early months of lockdown at his one-bedroom, railroad-style apartment inside a walk-up building in Chelsea.

“I had it fully decked out,” said Richardson, a 40-year-old beauty brand executive. “I really liked my place.”

But there was one glaring problem: his landlord’s no pets policy.

“Lockdown was the perfect opportunity to bring a dog into my life,” said Richardson, whose job typically demands a grueling travel schedule. “I’m single. I don’t have kids. It’s nice to think about someone other than myself.”

So in November, Richardson teamed up with friend and Corcoran broker Andrea Sayger and dumped his digs.

“In this market, the world is your oyster,” said Sayger. “There’s no harm in looking.”

Together they found a one-bedroom with a dishwasher and views downtown inside an elegant, pet-friendly Art Deco doorman building that was, remarkably, $100 a month cheaper.

Adam Richardson with his 8 week old puppy Annie at his apartment in Manhattan.
For Adam Richardson, lockdown was a golden opportunity to find a dog-friendly abode and bring home a little Havapoo named Annie.

“I still sometimes can’t believe this is my apartment,” said Richardson.

Apartment upgraded, his first move was to contact a dog breeder in Pennsylvania who had a new litter of Havapoo puppies available immediately. He booked a car and returned to Manhattan with his new pup, Annie.

Richardson is one of tens of thousands of New Yorkers who opted to adopt a furry friend during the pandemic. The ASPCA Adoption Center in NYC saw demand increase more than 177 percent from March through October in 2020, compared to the same period in 2019.

And Bideawee, an animal welfare and pet adoption organization serving New York City and Long Island, saw applications for fostering a pet increase tenfold from 70 to 700 between February and March last year, effectively clearing out their shelters. Many area breeders now have months-long waitlists for new puppies.

“Lockdown was the perfect opportunity to bring a dog into my life.”

But in many cases, adopting a new fur baby came with real estate headaches.

While there are roughly 1.1 million pets (600,000 dogs and 500,000 cats) in NYC, approximately 75 percent of buildings in the city do not allow pets, according to the real estate services website PropertyNest. Even the landlords that do allow cats and dogs often have weight and size limits (normally 50 pounds and under), or ban certain breeds all together (like pit bulls). When it comes to birds, reptiles and more exotic pets, the situation becomes even murkier (popular pets like hedgehogs, sugar gliders and pigs are straight up illegal in NYC).

New tenants should also be prepared to pay a non-refundable pet deposit that could range from $250 to $500 and up, or even a heftier monthly rent.

It’s a reality that has many renters scrambling to find ways to accommodate their new four-legged friends and spending bundles in the process.

Ben Devlin, a 35-year-old software engineer, made the extreme leap from renter to owner in November, in part, so that he could bring home Theo, a mini Goldendoodle puppy.

“I’d always thought about a dog,” said Devlin. “After buying in Brooklyn, it felt like the right time to pull the trigger on a pet.”

Devlin left his studio in a large-scale building in Battery Park City for a one-bedroom at the boutique, 12-story new development 561 Pacific in Boerum Hill — where one-bedrooms are priced from $900,000.

Theo has proven not only to be a great work-from-home companion, but Devlin said he’s also been “a good way to meet people” in his new ’hood during these socially distanced times.

He and his partner Ivan Chiu, 24, have already met two other couples with puppies and they enjoy arranging play dates.

Ivan Chiu, 24, left, and Ben Devlin, 35, right, with their 5 month old Golden Doodle, Theo. Chiu and Devlin moved to Brooklyn to get a bigger space for Theo, which includes a small shared courtyard in the building.

Sarah Medford, a 30-year-old marketing director, also swapped Manhattan for Brooklyn in July when she left her “shoebox” apartment in Chelsea with roommates and upgraded to a three-bedroom Williamsburg waterfront building with amenities and a huge private terrace located near two dog parks.

After spending the early months of quarantine at her parents’ house in Los Angeles, she debated moving back to New York at all.

“I was drained,” said Medford. “I decided I’d only come back on two conditions: one, I wanted to move to Brooklyn; two, I wanted to get a dog.”

Initially, all the breeder sites she visited had four- to six-month waitlists. Then, she spotted a girl on the street with a Bernedoodle puppy and got her breeder’s contact. As it turns out, they had a litter available immediately. So in September, the two-month-old pup Dude became the newest Bernedoodle on the block.

Sarah Medford with her 6 month old bernadoodle named Dude at her apartment in Brooklyn.

“It’s doodle central over here,” said Medford with a laugh.

And while she’s paying more for her new Williamsburg lifestyle, she said she “wouldn’t change it for anything.”

Some new pet owners are giving up on the five boroughs altogether for the love of a domestic beast.

Sameer Lakhani, a 27-year-old medical device salesman, and Rachel Renda, a 25-year-old doctoral student, chose to move from their cramped quarters in Queens in September to Village Square, a new development out east in Glen Cove on Long Island’s North Shore.

Sameer Lakhani, 26, left, and Rachel Renda 25, right with Winston, a 2 month old Pomsky, at the dog park near their new apartment.

Village Square, where one-bedrooms start around $3,000, afforded them a more spacious apartment and ample outdoor amenities, including terraces with fire pits, grills and dining tables, as well as a dog park and pet wash room.

In January, they fell for a Pomsky puppy on a breeder’s website and made the trek out to Amish country to bring Winston home.

“The whole building is more conducive to a puppy,” said Lakhani who, along with Renda, enjoys the active lifestyle of pet ownership, including dog walks and meet ups with fellow dog owners.

In New Jersey, Avidale Balanzat, a 26-year-old IT professional, also went the Bernedoodle route after she and her 11-year-old daughter Via upgraded from a one-bedroom in Jersey City in September to a two-bedroom apartment with a terrace at Bay 151, a new waterfront development in Bayonne, where two-bedrooms rent for $2,900.

The move was prompted by a need to curb her pandemic isolation blues. Both her younger and older sisters had recently moved into Bay 151, lured by its large grounds and pool, as well as a dog wash room and dog park.

“It was so sad, working from home and not seeing anyone,” said Balanzat.

But her new homebound lifestyle and larger pad enabled her to realize a longtime dream of getting a dog. A month after the move, she found Zeus on an Ohio breeder’s website and arranged to have him hand delivered to her door.

“I treat him like a new child,” gushed Balanzat. “I don’t feel alone anymore.”