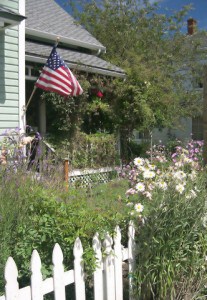 The 4th of July strikes a patriotic chord for all Americans. But, unfortunately, this time of year can also spark disputes between landlords and tenants over the right to display flags.

Newspapers across the country have reported on these controversies: A decorated veteran was told he must remove his window display; another was threatened with a $75 fine for draping a flag over his balcony. Two other tenants complained when their complex warned them against displaying flags on their cars.

Landlords are often caught in the middle with respect to flag displays.

On the one hand, they have to follow the law, and on the other, they have to field complaints from tenants who don’t like their neighbor’s display. Some tenants don’t like seeing nonconforming exteriors. Sometimes the flags make noise whipping in the wind. Others say the flags are a political statement. No one wants to field those kinds of complaints, so many landlords shy away from allowing any displays.

The laws concerning flag displays don’t give landlords or property managers much guidance. The federal Freedom to Display the American Flag Act, signed back in 2006, was an attempt to clarify the rules. The Act prohibits condo associations from banning flag poles and other flag displays in private residences. However, that law does not cover renters.

As a result, some states have passed their own laws which provide renters the right to display the American flag. At the same time, these statutes include many conditions, like limiting the size and location of the flags. Generally, states track the federal law by allowing property owners to restrict displays when necessary to “protect a substantial interest.”

Nearly all regulations concerning a flag display refer to appropriate flag etiquette — for instance, the flag shouldn’t be allowed to weather, it should be brought in at night, and one displayed vertically should have the Union on the left as it is viewed from the street. And, the ones on cars are often inappropriate.

Chances are, the local fire code also comes into play. Any fabric draped over a balcony or otherwise interfering with access routes — even if it is an American icon — is a safety hazard.

Bottom line: landlords can regulate a tenant’s flag display, so long as they pay attention to the rules. However, it may be wise to develop a policy that focuses on safety and habitability — not on politics. Showing some flexibility may diffuse the pressure cooker of emotions surrounding a flag display. Being too restrictive may increase the possibility of disputes with tenants — and between tenants — which inevitably creates more work for the landlord. And that takes all the fun out of the 4th of July.