Depending on your bank account, a three-bedroom apartment in an up-and-coming Brooklyn neighborhood renting for $2,899 a month may seem like a good deal. It’s close to an express stop on the subway into Manhattan and a short walk from hipster hangouts such as Dynaco and the Michelin-reviewed Do or Dine. Inside, the apartment features hardwood floors, stainless steel appliances, and exposed brick. Lots of exposed brick. 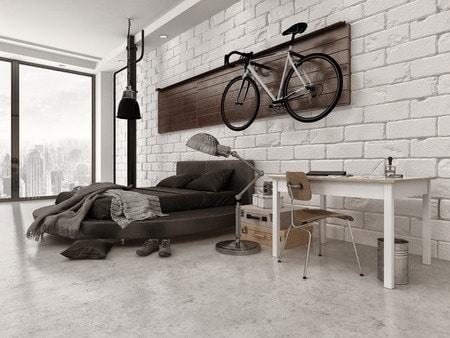 The newly renovated digs, advertised on Craigslist in early January, feature several small cutouts of brick, framed by wood sills and back-lit like works of art. It’s an urban landlord’s idea of a 24-hour makeover: Tear down some dry wall, add a bullet point to your real estate listing, bask in the glory of instant cool. Peruse the real estate listings in Boston, Chicago, or Washington, and you’ll come across more listings like that one. You may find a brick column in an otherwise modern kitchen, as seen in a recently listed two-bedroom on Boston’s Mission Hill. Or a track-lighted brick panel—ready for close-up—like the cutout in a three-level home in Washington’s Bloomingdale neighborhood.

Brick interiors make up a tiny part of the national housing stock. Only two-10ths of a percent of properties listed by real estate brokerage Redfin mentioned exposed brick in the listing, though that number has been steadily rising since 2010. The number of Google searches for the phrase is also rising, with regional interest peaking in Washington, New York, and Chicago. For landlords and developers courting apartment hunters in some corners of those markets—think remodeled apartments in gentrifying neighborhoods—brick walls have become something of a cliché. “Everyone is doing it to hike the price of their rent,” said Jeremy Israel, the broker who listed the Bed-Stuy apartment, adding that some instances of exposed brick make more sense than others. “It’s one thing in an old loft in [the Brooklyn neighborhood] Dumbo, but in a gut-renovated apartment, it’s less natural,” he said.

Aaron Hirsch, the owner of Kingman Development in Washington said exposed brick is a close cousin to the industrial loft aesthetic that gained popularity in the late-1970s. The look appeals to renters who want their home to express their individuality, he said. It also appeals to landlords, like Hirsch, courting those renters. “Are you devoid of character?” reads a Kingman listing for newly renovated studio apartments in a century-old building in Washington’s Columbia Heights neighborhood. If not, the listing asks, why would you live in a giant anonymous building? “What I think people are looking for is authenticity,” he said. Shawn Bhandari, 34, who shares a $4,000-a-month apartment with three roommates in Brooklyn’s Bushwick neighborhood, has another word for the effect produced by the exposed brick chimney in his bedroom: “Not to be too cheesy, but it gives the room an earthy feel.”

Exposed brick is also a direct appeal to millennials drawn to city living partly as an alternative to the sameness of suburban life. “Exposed brick signals that something is one-of-a-kind, that you can’t get it anywhere else,” said Jamie Grigg, author of the real estate blog Exposed Brick DC, which is focused on uncovering hidden gems in the nation’s capital. In Washington’s rental market, an apartment with brick walls rents for $200 more than a place with plaster walls, Grigg estimates. For a certain kind of renter, the charm of exposed brick might persuade renters to overlook the absence of other amenities. But brick isn’t just for the price-conscious: A bricked-over dining room in a $4.25 million Greenwich Village listing from 2012, for example, caused one blogger to suggest “an annual award show celebrating brick things.” Grigg said the great thing about exposed brick is that it appeals to people who want to be on-trend, as well as those who favor historic trappings. “I think developers are smart to capitalize,” she said.