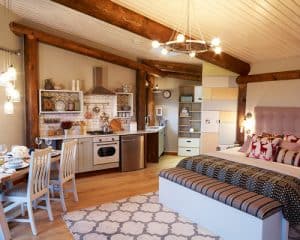 To find the hottest design trend in Los Angeles right now, look no further than your own backyard.

In 2017, when California relaxed the rules for obtaining building permits for accessory dwelling units — otherwise known as ADUs or “granny flats” — on single-family residential properties, it ignited a building industry gold rush of sorts and ushered in the dawn of the microdeveloper.

Kol Peterson, author of “Backdoor Revolution: The Definitive Guide to ADU Development,” said interest generated by the policy changes sent ADU development in Los Angeles skyrocketing. Admittedly, many of those permits are for legalization of existing and unpermitted ADUs, not new construction. “Still,” said Peterson, “it’s unlike anything else we’ve seen in the country.”

“It was longer than I thought,” she said, “and it wasn’t cheap. If you think it’s going to be $75,000, it ends up being more like $110,000.” But the project has given her a sense of freedom and flexibility. “I can rent it for long-term stays,” said Young of her contemporary garage conversion currently occupied by a traveling nurse, “but it also gives me the opportunity to rent my house and stay in the granny flat. … As I go into retirement, I may travel more or visit family on the East Coast. It gives me the flexibility to do that and have income coming in.”

Bo Sundius, coprincipal of Los Angeles custom housing firm Bunch Design, has created plans for ADU prototypes aimed at fast-forwarding the planning stages. “We’ve found we can’t build anything for less than $175,000 in Los Angeles, with the regulations and the energy performance features that are required,” said Bunch. “HGTV likes to make it seem that these things happen overnight, but the truth is they don’t.”

“When a contractor looks at it, he’s got to run utility lines, bring in every single trade that builds a house — his plumber, drywaller, painter, electrician,” said Sundius, “Even though it’s small doesn’t mean it’s simpler.”

When it comes to good ADU design and, Peterson said, “Tall ceilings, long sightlines, windows facing toward the garden, and creating an indoor-outdoor connection using windows and sliding doors” create a sense of space many crave.

A great room, encompassing the lion’s share of the home’s square footage and incorporating an open-plan kitchen, living and dining space is key, he said.

“Differentiate the areas by material selection or color choice, so that functionally you get one big space but it doesn’t look monotonous,” said Peterson. He advises against large bedrooms, oversize bathrooms and unnecessary hallways: “In an ADU it’s a waste of space.”

Regarding storage, more is more. “I always encourage people to build in as much internal and exterior storage as possible for things like suitcases and seasonal clothing,” said Peterson, “as well as long-term storage needs like suitcases and bikes, lawnmowers … canoes, that kind of stuff.”

Privacy should be enhanced through the use of screening, landscaping, fencing or vegetation. “Orienting the structure so that each person isn’t staring into the other’s kitchen is also a best practice,” said Peterson.

In South Los Angeles, homeowner Ricardo Lopez worked with the contractors at Clean Energy Solutions in San Dimas — which specializes in streamlining ADU projects — to convert his garage into a two-bedroom, one-bathroom unit with central heat and air. (Garage conversions are said to be the most popular ADU option in Los Angeles.) Lopez’s project was completed in eight weeks, and the new space is already rented. The $1,800 rent is not only paying off the $440 monthly payment on the loan he took out for the project but helps with the mortgage payment on his primary residence.

“To be honest, besides starting a business inside your house, there’s absolutely nothing you could do to your property that is going to generate income besides this type of rental,” Lopez said.

Oasys has built one ADU in Palm Springs and has a second under construction in Venice. Rochas constructed a third 800-square-foot model for public viewing on-site at Row DTLA to demonstrate that form and function can live happily ever after. “For some reason there’s this idea that ADUs are tiny,” he said, but “at 800 square feet, that’s not a tiny home. We don’t have to retrain ourselves to live in an ADU.”