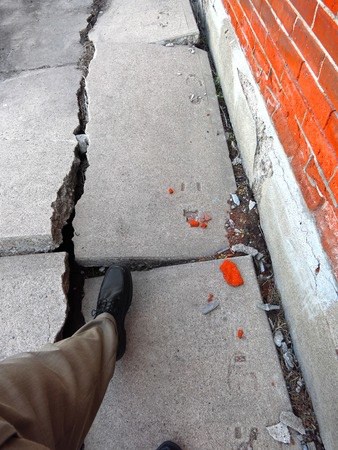 Los Angeles’ commercial property owners should be required to pay for repairing badly broken and inaccessible sidewalks next to their land, a city report released Tuesday suggests.

In addition, heavily damaged sidewalks next to homes should be repaired by the city and then future responsibility for upkeep and liability of the walkways should be shifted to property owners, the report says.

Under a policy dating to the 1970s, the city pays for repairing and maintaining city sidewalks damaged by tree roots, a program that has become a major unfunded financial burden on L.A.’s municipal budget. Santana is suggesting the mayor and City Council repeal an exception to a section of the municipal code that gave the city responsibility for walkways.

“The City recognizes that it is unfair to property owners to return responsibility for repair of broken sidewalks, and therefore a phased in approach to the transfer of responsibility is recommended,” the report states.

Under the proposed changes, commercial land owners would be given a year to fix broken sidewalks next to their property, where city inspectors deem them to be inaccessible. Santana recommends waiving permit fees for the work and creating a list of pre-qualified contractors to do the walkway repairs.

For residential areas, the city should repair any sidewalk damaged by tree roots and then transfer the responsibility to the property owner — a “fix and release” approach, the report says. For sidewalks in good condition, a certificate of compliance would be issued to the property owner, who would then be held liable for any future repairs.

“It seems like a fair solution to the problem we’ve got,” said Dave Wilson, who has a few broken walkways outside his Hollywood Hills home.

Santana’s report follows a proposed settlement to a lawsuit filed by attorneys for the disabled, which requires the $1.4-billion expenditure on sidewalks repairs over the next three decades.

“The policy is intended to outlive that settlement term so that sidewalks are never in the disrepair that they are today,” Santana said in an interview. “The way we do that is sharing in the responsibility with the property owner.”

The majority of cities in the state place the responsibility of fixing sidewalks on adjacent property owners, a survey by the League of California Cities found.

As part a comprehensive program to fix the L.A.’s sidewalks, the Board of Public Works and the Department on Disability should use the city 311 service system to collect information about broken walkways, the report says.

Public works officials don’t know how many miles of sidewalks exist in the city or their condition. Previous estimates put the total sidewalk network at more than 10,000 miles, with nearly half needing repair. There also is no centralized record-keeping on the location or condition of curb ramps.

The public works department should create an inventory of sidewalks and curb ramps through a citywide inspection program, according to the report.

“Without this information, it will be difficult to measure progress as the City implements its new sidewalk management strategy,” the report states.

Under California law, property owners are responsible for repairing sidewalks. But L.A. leaders opted to assume the burden for walkway damaged caused by city trees when federal funding was available for the work.

After the federal money ran out, L.A. voters were unwilling to support tax increases to continue the repair work and a massive backlog of uneven and temporarily patched walkways developed over the years.