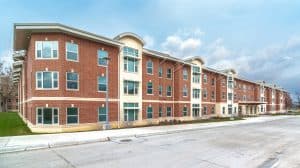 Iowa Gov. Kim Reynolds (R) on Friday signed into law a new bill condemned by housing advocates and city officials that would allow landlords to turn away tenants who receive Section 8 vouchers to help them pay rent.

The bill, which passed in both chambers of the Republican-controlled Iowa General Assembly in March, prohibits counties from adopting laws that would prohibit a landlord “from refusing to lease or rent out a dwelling unit to a person because of the person’s use of a federal housing voucher issued by the United States department of housing and urban development.”

The measure, which goes into effect Jan. 1, 2023, will override laws preventing the practice currently in place in three Iowa cities: Des Moines, Iowa City and Marion.

Reynolds announced the signing Friday, though she did not provide any additional comment on the law, according to the Des Moines Register.

According to data from the Department of Housing and Urban Development (HUD), renters of roughly 20,000 housing units in Iowa use federal vouchers, with the average household income of participants at $12,577 per year.

Landlord groups backed the law, with Iowa Landlords Association Executive Director Andrew Lietzow telling the Register, “We try to train our members on the advantages of accepting Section 8, or housing choice vouchers, but our preference is that it would remain a voluntary program.”

Landlord groups have argued that the vouchers contain several requirements that have become obstacles for landlords, including additional inspections and challenges with regaining the money spent on repairing damages to properties.

However, housing advocates and city officials have pushed back against the law, arguing that it will disproportionately harm people of color and residents with disabilities, who make up a large share of voucher holders in Iowa.

Des Moines Community Development Director Chris Johansen told the Register, “When you reduce the number of landlords that are willing to accept the voucher, that just creates one more hurdle for … our most vulnerable population we have.”

The Iowa law has gained national condemnation as well, with HUD Secretary Marcia Fudge suggesting in an interview with MSNBC’s Joy Reid in March that the measure could face a lawsuit from the federal government.

“It is a discussion that I would need to have with the Department of Justice, but I would clearly believe that we are within our rights to demand that these communities cooperate with what we are doing,” Fudge told MSNBC at the time, adding that “fair housing is the law of the land.”

“If they want to get into a fight about it, we’re ready to fight them about it,” she said.