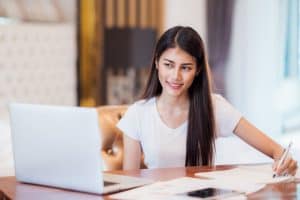 “If you look at the U.S. and North America, there are a ton of container projects but nothing on a large scale that addresses student housing,” said Kroft.

Kroft said student housing developers are constantly reaching out to Giant to ask about the shipping containers. And he already has a design in hand.

Shipping containers are just one of the innovations in student housing emerging to address high construction costs, lack of land, the rapidly rising price of a college education, and environmental concerns.

Shipping container construction has already played a big role on several college campuses in Denmark, The Netherlands and Israel.

KTGY is currently working on five shipping container housing projects in the Los Angeles area that will serve as future housing for the homeless, and student housing is a strong contender for the next consumer market segment, said Principal David Senden.

“Because student housing is so repetitive, and units are so standardized, it does make a lot of sense,” Senden said, adding that they are still somewhat in the “beta” phase of using the materials. “The designer in me cringes a little bit, treating housing like a commodity, but I think it’s definitely the right time for that kind of thinking.”

Another innovation in student housing is designed to address rising costs for developers, institutions and students is microunits. In 2016, the University of British Columbia in Vancouver, Canada, created a “Nano Studio” unit that includes a kitchen, bathroom and a combination sleep/study space—all in just 140 square feet.

How do they do it? One of easiest areas to cut is the kitchen, which is also typically one of the priciest parts of a unit to build. It can save big money, while still offering everything a resident would need. The traditional four-burner stove is reduced to just two burners. The hulking oversized refrigerator is downsized to a smaller minifridge in both common areas and individual bedrooms.

“The evolution we’re going through this time is interesting because it’s focused on the Millennial generation that is now also in graduate school and is really building to their co-living needs,” said Jamie Swick, an executive managing director at Colliers International.

While their designs may not go so far as to qualify as micro units, most developers are reconfiguring layouts to increase density and lower unit prices. Instead of every student having their own bedroom and bathroom, builders are shrinking bedroom sizes and even mixing different price points within single apartments. Besides the practical reasons for fitting more housing in less space, affordability concerns and the growing student debt burden are mobilizing this trend.

“I think finally, after so many years, student debt has finally reached a point where people are talking about it,” Senden said. “Everyone’s trying to find a way to make housing affordable to students. And students are demanding it.”

The downsizing trend also applies to amenities. Builders are eliminating the extravagant pools and outdoor areas and emphasizing study spaces instead. Spaces used exclusively for entertainment are being designed as flex spaces instead—to support both work and play. Rooms with study carrells, quasi-library spaces or outdoor areas with a strong wi-fi connection (of course) are in demand.

“Wi-Fi is a little like water these days: It’s a utility, and if it’s not there, it would be a catastrophe,” Senden noted.

Designers and developers are also finding new ways to respond to students’ strong desire for sustainability, a feature that is becoming as essential as Wi-Fi.

“My daughter is in college and they are really invested,” said Lisa Hale-Meindl, a senior director of real estate operations at Greystar. “I think there’d be an appeal to move into a facility that’s energy-efficient or built with sustainable materials.”

Kyle Wagner, a principal at architecture firm Mackey Mitchell, said his firm building on the idea of sustainable student housing.

Mackey Mitchell is collaborating with two other architecture firms on a 700-bed residence hall at the University of Arkansas in Fayetteville, Ark. The college dorm is the first student housing project of its size in the U.S. to use mass timber technology as a primary structural element.

In addition to being more sustainable, Wagner said studies have shown that building with wood makes people feel healthier, reduces stress and improves productivity. And from a development standpoint, structures are completed faster, since the materials are often manufactured offsite.

“I think there’s a lot of win-win using this technology, which is something we’re excited about and we see it becoming more popular in the future,” said Wagner.