When a group of prominent Los Angeles trial attorneys started its own firm in January, it shunned the sleek office skyscrapers that typically house blue-chip firms.

Hueston Hennigan instead set up shop in the century-old PacMutual office complex downtown, a stone edifice housing Internet start-ups, fashion firms and other creative types where rents are hitting $4 a foot, about double that of some big towers.

“We looked at all the tall, square buildings where every other law firm is,” said Moez Kaba, a partner at Hueston Hennigan. “Then we fell in love with PacMutual.”

The move illustrates the challenges faced by the modern high-rises that dominate the L.A. skyline but no longer command the office market. Owners of the big buildings are responding to the “creative office” wave with a campaign intended to prove they are not stuck in the hierarchical cube-farm motif of the 1990s.

The largest landlord of Class A offices downtown, Brookfield Office Properties Inc., is planning to overhaul the ground floors of at least two of its seven downtown buildings, providing easier access to art installations and cultural events such as concerts intended to appeal to young workers, said Bert Dezzutti, head of the Western region for the New York company.

The company also had leading architects deck out six office suites to showcase what can be done to make buildings that were the pride of the pre-Internet era cutting-edge again.

Although office-tower landlords want to attract the kind of fast-growing tech, media and entertainment firms that have clustered on the Westside, Dezzutti said the big buildings also need updates to retain their accountants, lawyers and bankers — who are now demanding creative spaces, too.

“The core tenancy of downtown L.A. is and will remain the professional services industries,” he said. 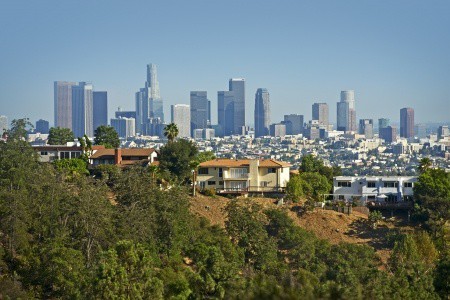 The towers’ competition is the wave of rehabbed brick and stone buildings — once outdated, now retro cool. The new home of Hueston Hennigan, the former headquarters of Pacific Mutual Life Insurance Co., dates to 1908 and struggled in the 1980s and 1990s to compete with the wave of fancy high-rises built downtown.

Among its biggest tenants is thriving online clothing retailer Nasty Gal, a purveyor of racy fashions for young women. A generation ago, the presence of such noncorporate tenants would have been Kryptonite to law firms out to establish credibility with L.A.’s business elite.

Now, the architecture of respectability is changing fast. Carpet, bright lights and cubicles are giving way to polished concrete floors, exposed brick walls and indirect lighting. Individual offices are out, and shared spaces, with comfortable furniture, are in. People may not even have assigned desks, working each day where they choose.

Attorney Kaba said he likes the “energy” he feels as a neighbor to young tech and fashion firms. He’s confident his Ivy League colleagues and the young attorneys they aim to recruit will feel the same way.

“They are hard-charging, really passionate lawyers who work long hours,” he said “We want to create a space where they feel good coming in to work — and not work in a bubble.”

The shift in workplace tastes comes as downtown itself is in the midst of a dramatic transformation. Formerly a collection of private office and government buildings — surrounded by blight — downtown has been transformed into a sprawling 24-hour urban neighborhood with thousands of prosperous residents paying high rents.
New residences, stores and restaurants are being created all over downtown, bringing pedestrians at all hours and a new sense of community.

Shifting perceptions of office chic pose steep challenges for high-rise landlords including Brookfield, CIM Group and OUE Limited — the owners of millions of square feet of downtown space designed as plush sanctuaries for button-down businesses. How to make their buildings less stilted and isolated?

About 25% of the office space on Bunker Hill, where several towers are clustered, is empty. That compares with 18% in the adjacent flats of the financial district, according to brokerage Cushman & Wakefield. Bunker Hill landlords, however, seem confident that downtown’s resurgence will spread uphill, and they generally continue to ask for higher rents than are found in the financial district.

At Brookfield’s Gas Co. Tower and Wells Fargo Center, the architects have completed the hip new spaces the landlord ordered up as models. Each is designed to convince prospective tenants that they can get the benefits of an open plan and creative office inside a traditional corporate-style tower.

In one suite, meant for an entertainment law firm, pod-like tents serve as meeting rooms and an inviting nook for relaxation can be reached by ladder. In offices created for a fashion media firm, dramatic printed wall coverings offer a counterpoint to a vast mural by artist Frank Stella visible through the north windows.

“When someone can work remotely with a handheld device at Starbucks or at home, why go to the office in the first place?” he said. “We created a better porch light to attract the moths.”

With the lines between home and work growing blurred, Gajewski’s created a homey office space with residential-style furniture, subdued lighting and pods for meetings or solo work — in the shape of Chinese lanterns. A “quiet” room could be used for yoga or employee training.

The U.S. Bank Tower — the tallest building in the West at 72 stories, owned by OUE — is also undergoing a major renovation, at the cost of about $50 million, which includes adding a sky-high restaurant and an observation deck to be completed by the end of the year.

At street level, the lobby will change from staid to sparkly with the installation of one of the biggest LED walls in the country, essentially an enormous 3-D television screen that will project colorful, ever-changing art displays.

Dezzutti predicts that the tech and entertainment types who have clustered in Santa Monica, Playa Vista and Hollywood will eventually make their way to downtown towers. It’s already happened in other cities including Lower Manhattan, Seattle and San Francisco.
Downtowns have the transportation infrastructure, high-speed Internet fiber connections, and bars and restaurants that are harder to come by in other neighborhoods.

The tall buildings will remain a tough sell for some firms, however. When downtown tech company NationBuilder, which creates tools for online communities, decided to expand last year, it landed in brick-walled space in the 1920s landmark Millennium Biltmore Hotel.

Why not locate in a conventional skyscraper?

“I don’t think that ever crossed our minds,” said Jusleen Sodiwal, senior strategist for NationBuilder. “The kinds of companies that are attracted to real estate like that haven’t yet seen the light.”

For architect Doug Hanson, the difference between being in a skyscraper or being in a so-called creative building is less important than the neighborhood. His firm, Hanson LA, rented offices halfway up U.S. Bank Tower in 2005 simply because it was available and affordable.

In 2010, as the downtown revival took hold, he moved into a 1920s office building on Spring Street, last used for garment manufacturing. The building was so “creative” that it didn’t have heating or air conditioning, but an urban renaissance was going on outside their front door.

Now Spring Street is getting hot, his building has been renovated — and rents are rising to match.

So Hanson may move yet again. He’s considering a high-rise in the financial district.

“It’s really about the neighborhood on the street and the neighbors in the building,” he said. “We can do whatever we want with the space.”