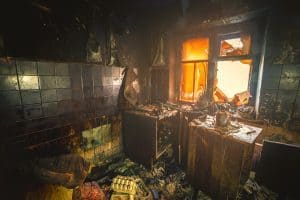 Family members displaced by an apartment fire early Monday morning in Charlotte said they repeatedly told their landlord about unsafe wiring conditions and other hazards before the blaze.

Che Farmer said her family of six narrowly escaped their home after an outlet caught fire in an upstairs bedroom where her husband slept.

“When the door opened it was as if Hades itself or Hell itself had opened up,” Farmer said.

The family has lived for almost seven years at the Woodcrest Apartments in the 2900 block of Seymour Drive in west Charlotte. Farmer said they had a previous stint renting there before, and their relationship with the landlord goes back some 20 years.

During that time, she said the family experienced frequent electricity interruptions, water and mold problems and other unsafe conditions. It got so bad that they often took matters into their own hands to make repairs with paint and flooring over the years, she said.

Attempts to reach the property owner, Willie Knox, on Monday were not successful.

Their possessions are a total loss, Farmer said, including family photos and their pet parrot, which died in the fire.

While some of the eight units were empty at the time of the fire, Farmer said at least one other household was displaced Monday.

‘FIRE WAS ALL OVER’

Monday afternoon, Farmer pointed to the charred remains of the upstairs bedroom, and the outlet that sparked the fire.

“We came upstairs and fire was all over the wall, from one end to the other end,” she said.

Charlotte Fire Department investigators have “deemed the fire accidental due to faulty electrical outlet” and assessed damage at $37,000, according to a post on the department’s Twitter.

Farmer’s complaint described mold, water damage and concerns about the wiring. City officials said investigators contacted Farmer in late April but had not yet reached her to schedule an inspection.

The city’s online code enforcement database also shows more than a dozen closed nuisance complaints and one closed housing complaint for the property, but no documents are available to determine the nature of the violations.

Nuisance complaints, such as tall grass or trash outside, are not considered life safety concerns like some housing violations.

Records for cases older than three years are not retained, according to Jane Taillon, code enforcement division manager. The most recent case related to the property was 2017, outside the three-year window.

Community activist Gemini Boyd, who is also Farmer’s cousin, said he wants to see greater accountability for landlords who have substandard living conditions.

Jessica Moreno with Action NC said renters who are unable to find affordable housing in Charlotte’s increasingly expensive market often are forced into situations where landlords can take advantage of them.

“Our families live in these communities with these type of conditions because we’re working-class people, and it’s not right,” she said.

She likened it to the situation at Lake Arbor, another west Charlotte complex where tenants were displaced in 2019 after numerous code violations. Action NC assisted those tenants as well.

“We see the cycle of displacement with what happened last night to the Farmer family,” Moreno said.