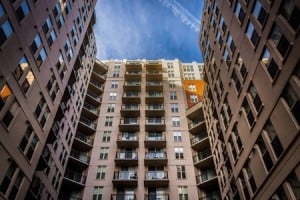 Developers Steven Shores and Marc Pollack found a way to stand out from the crowd rushing to build apartments in Atlanta’s ritziest neighborhood: they’re putting their 315-unit project in Buckhead on hold.

“We found ourselves wondering if it makes sense now to move forward on a project when four or five others are on the exact same schedule,” said Shores, whose company, Pollack Shores Real Estate Group, will wait a year then reassess its plan for the luxury building. “We are in it for the long term. There’s no reason we can’t hold off temporarily.”

Apartment developers are starting to tread more carefully as cracks appear in the five-year-old boom that sent rents soaring to records across the U.S. Construction concentrated in fast-growing urban markets has left cities from New York to Denver and San Francisco with a surplus of high-end units. Rent growth has already tapered off in some areas, and lenders are getting more selective about the projects they fund.

Builders went upscale to preserve profits squeezed by rising land and labor costs. Now they’ll need to work harder to find renters willing to pay a premium for trendy locations and frills such as rooftop pools and fire pits. About 30 percent of the apartment units under construction are in cities, compared with 15 percent in the previous decade, according to multifamily-data firm MPF Research.

“Everybody fell in love with these markets and wanted to build — but you can’t build forever, it doesn’t work that way,” said Ryan Severino, chief economist at research firm Reis Inc. “The apartment market is losing steam.”

The second quarter was the fifth straight in which construction exceeded net gains in occupancy, according to a report Reis issued late Tuesday. With almost 200,000 units completed over the past 12 months, “2016 is set to challenge records for construction figures, if not break them,” the firm said.

Apartment owners are the worst performers among real estate investment trusts this year. A measure of multifamily landlords has lost 0.3 percent, compared with a 12 percent gain for the broader Bloomberg REIT index. Equity Residential, the biggest U.S. apartment REIT, cut its revenue forecast when new leases in New York and San Francisco fell short of expectations because of an increase in supply in those cities.

Effective rents in San Francisco, where apartment construction is at a record high, rose 2.6 percent in the second quarter after climbing 9.6 percent a year earlier, data from Axiometrics Inc. show. In Manhattan, deal sweeteners such as a free month were included in 13 percent of new leases in May, up from 1.6 percent a year earlier, according to a report by appraiser Miller Samuel Inc. and brokerage Douglas Elliman Real Estate.

Smaller cities also are awash in high-end supply. In Denver, one of the nation’s most robust economies, rents rose 4 percent in the second quarter from a year earlier, down from 11.2 percent growth for the same period in 2015, according to Axiometrics. Houston, reeling from the oil slump, will get 27,575 new units this year, more than any other U.S. city. Effective rents there, up 3.8 percent a year ago, dropped 1.4 percent in the second quarter.

In Austin, Texas, where technology jobs are driving up wages, 12,130 units will be delivered over the next 12 months, the most since 1985, said Robin Davis, manager of data firm Apartmenttrends.com. The 1,124 apartments under construction downtown would expand that area’s rental market by about 31 percent.

Developer Mike Lynd has shelved a midrise building planned for suburban Austin with 325 units, and a tower of more than 30 stories in Houston. Lenders have started tightening underwriting, and land costs in Austin have doubled in three years, “choking off the ability to add supply to Austin in a big way,” he said.

Average rents downtown, which increased 1.2 percent in the first quarter, would have been flat if not for the recent debuts of some of Austin’s most-expensive buildings, Davis said.

“The number of units coming online is at such a high price tag,” she said. “The central core is going to take time to absorb these units.”

At one of those properties, Lynd’s The Bowie, renters are being offered as much as eight weeks free for some floor plans. One-bedroom prices start at $2,000 a month and amenities include a 36th-floor pool deck billed as the highest in Texas. The tower — which opened a year ago and is 82 percent full — is leasing out about 19 units a month, a pace Lynd said he’s pleased with because the high rents limit demand. Financing approval for the project was based on a lease-up rate of 20 apartments a month, he said.

Federal banking regulators in December urged commercial lenders to be vigilant in monitoring and managing risk, and reinforced earlier warnings about competitive pressures and rapid growth in some lending markets.

“Bad loans tend to happen in good times because of competition and the ease of capital liquidity — it tends to be at this point in the cycle that banks and lenders increase their risk appetite,” Richard Taft, deputy comptroller for credit risk at the Office of the Comptroller of the Currency, said in a phone interview.

Rising interest rates or a decline in rental income would make it harder for borrowers to refinance when loans come due in a few years, said Sam Chandan, dean of the Schack Institute of Real Estate at New York University.

“The possibility that rent growth will lose some momentum is not being taken into careful account by every lender in the market,” Chandan said. “If there was only one lender in the market, they wouldn’t need to push the envelope. Competition is good, but right now it is particularly intense.”

So far, borrowers have given commercial lenders no reason to panic. The delinquency rate for bank-held multifamily loans was 0.26 percent in the first quarter, the lowest since 2005, data from the Mortgage Bankers Association show. The share of loans at least 90 days late was as high as 4.71 percent in 2010. And banks getting more choosy may already be resulting in a trail-off of construction. Permits to start work on multifamily buildings have fallen 12 percent since January, Census Bureau data show.

“Lenders are a little cautious because they think we’ve had our run and it’s possible we’ve peaked,” said Michael Riccio, senior managing director for debt and structured finance at CBRE Capital Markets, which brokers and originates commercial loans.

Shores, the developer who’s delaying the Atlanta building, said there are still opportunities to build. His company is moving ahead with a project in the city’s fast-growing Midtown neighborhood.

“We are, in selected markets, seeing a wave of supply come, so that we’re just
being cautious — we’re not stopping development,” he said. “We are making sure we have the best sites and best equity partners who have a longer-term focus.”