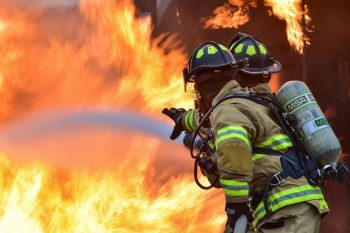 Thirty-two Frisco residents have filed a petition to sue the owners of the Cortland at Stonebriar apartment complex in the wake of a fire that was announced “put out” after over 36 hours last week.

One resident was taken to a local hospital with burn and respiratory injuries, and four Frisco firefighters were taken to the hospital with minor injuries but were later released, according to the Frisco Fire Department.

Keith Gall, battalion chief with the Frisco Fire department, said 62 of the 260 apartment units in the building were believed to have been impacted by fire damage, and many had water damage.

The petition allegations include that prior to the fire the owners knew that not all smoke alarms and not all fire sprinkler and fire suppression systems were in proper working condition.

“Resident safety is our priority,” Cortland said in a statement to The Frisco Enterprise. “Our heartfelt sympathies are with the community during these trying times. We are working closely with local officials to fully assess the situation, but we cannot provide any information at this time.”

Zeke Fortenberry, one of the two Dallas-area attorneys representing the residents, said the sprinkler system in the building had not engaged.

“It’s our belief that that water damage is only from the fire hose and not from the sprinklers,” he said. “There’s no units, like on the side of the building that’s not affected, that have water damage, which indicates that the sprinklers never engaged.”

Fortenberry said there had been numerous complaints prior to the fire from clients about the smoke alarm system.

“There’s a pattern that we know they’ve made complaints about smoke alarms not working properly and making complaints about residents who are smoking cigarettes and the alarms aren’t going off,” Fortenberry said. “And so either they’ve been tampered with or they’re not actively working, and those complaints were documented to management prior to the fire in the months leading up to the fire.”

Fortenberry said more people are currently looking to join the lawsuit. Each individual would be seeking an individual recovery, he said.

“So there are some people that we represent who lost everything and were very injured and had smoke inhalation, they’ve seen the doctor as a result of a cough that was affecting them,” he said, “so those people may have damages in the six figures.”

Other clients who lived on the other side of the building received minimal damage and may have a lesser claim, he said.

In addition to property damage, client injuries include personal injuries, he said, such as if they had smoke inhalation or if they had a mental impact from the event.

“I’ve had people telling me they couldn’t sleep for nights after this because of the stress and the worry on them about things they lost and their concern about what to do next in the freezing cold,” Fortenberry said.