What do a metro’s median age and economic strength have to do with apartment renter turnover? It turns out, the connection is strong. It also turns out that household income, Millennial population and rent growth have very little to do with lease renewal conversion.

MPF Research recently covered the metro areas with the highest and lowest apartment renewal conversion rates. Renewal conversion is the share of apartment residents with expiring leases choosing to renew their leases instead of moving out. The higher the retention rate, the less mobile the renter base.

It turns out, the lower the median age of a metro’s population, the more transient the apartment renter base is likely to be. In fact, seven of the 10 metros with the lowest retention rates have median ages lower than any of the metros with the 10 highest rates. San Antonio had the lowest median age in the sample, and also the lowest retention rate. Intuitively, a younger population is typically more mobile than an older one. Younger people are less likely to have children, more likely to change jobs and less likely to have a ton of stuff – all factors in mobility. The one exception from this study is Tampa, which despite a low retention rate, posted the highest median age of the 20 markets at 42.3 years old. 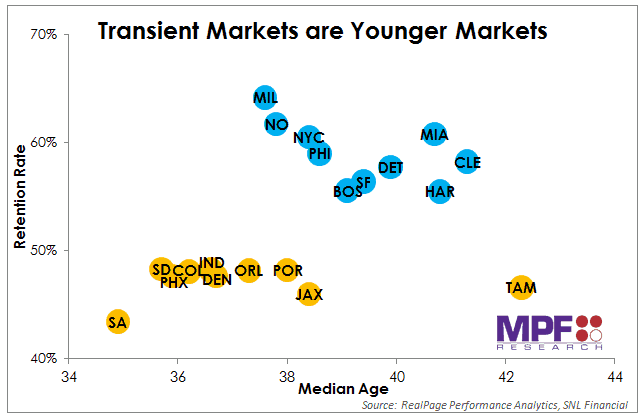 Transient markets have another common theme: higher job growth rates. During the last three years, annual job growth was most pronounced in areas with higher resident turnover. Furthermore, those markets with lower retention rates were all in the South and West regions. Those regions also saw greater job separations and openings, as we noted earlier in another article. Meanwhile, less mobile areas with slower job growth tended to be in the Midwest and Northeast regions, with few exceptions. San Francisco, despite being above average on the retention scale, has posted strong employment growth around 5% in each of the last three years.

With median age and employment growth corresponding to apartment lease renewals, it might seem logical that related factors such as median household income, Millennial population growth, single-family pricing and apartment rent growth levels would also impact renewal conversion rates. But it turns out, those had little explanatory power regarding renewal conversion.

In terms of household income, markets on the low end of the spectrum had both high and low retention rates. For example, renewal conversion rates varied greatly in markets where median household income was $50,000 or less. Miami, New Orleans, Tampa Bay and Orlando ranked as the lowest in these groups for incomes, yet fell on opposite sides of the spectrum for retention rates. At the higher end of the income spectrum were several high-retention markets, but Denver and San Diego – higher-income markets with lower retention rates – weren’t far behind.

Growth in the Millennial population was also taken into consideration as a possible explanatory variable. But again, results varied widely. It would seem logical to assume that areas with less young people would generally be less mobile, and markets with large Millennial in-migration would be less likely to renew. But for most markets, the data said otherwise. The two apparent exceptions were Orlando and San Antonio, both of which saw high Millennial growth rates and low lease conversion rates.

The final variable measured in relation to renewal conversion was annual rent growth, which in the end provided little explanatory power. Both high and low retention markets had varying degrees of rent growth over the past 12 months. The chart below looks specifically at effective rents for new leases (asking rents minus concessions), and we see a similar story looking at actual lease transactional data.

As we noted previously, a healthy level of turnover helps the top line. Apartment owners have historically used high retention rates as a bragging point – even on REIT earnings calls. That’s not necessarily a bad thing, but it’s also not necessarily a good thing in terms of bottom-line revenue growth. And because of that, apartment investors would be wise to challenge the conventional wisdom that mature markets with lower turnover offer a better bet.