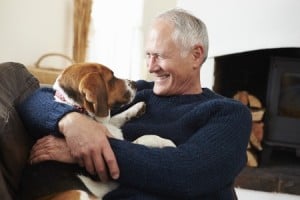 A landlord violated the law when it evicted a tenant who filed a complaint with the state Human Relations Commission over an order to get rid of his therapy dog, a Commonwealth Court panel ruled Thursday.

That ouster by Village Realty Associates constituted an illegal retaliation against someone who was defending his rights, Judge Christine Fizzano Cannon wrote in the court’s opinion.

The case revolves around Village Realty’s interaction with former tenant Jonathan Blaine of Manchester regarding a puppy he bought as a therapy animal in January 2015 on the advice of his therapist.

Blaine was living in a dog-free apartment complex at the time and was on a month-to-month lease. After asking Village Realty’s permission to have the dog, he provided the landlord with his therapist’s prescription for the animal.

Yet in March 2015 the apartment manager told Blaine he had to get rid of the dog or move, Cannon noted.

Blaine filed a complaint with the Human Relations Commission about that order. It was resolved in April 2015 via an agreement where Blaine was allowed to keep his dog.

The ink was barely dry on that deal when the landlord began sending letters informing Blaine that neighbors were complaining about his dog urinating and defecating on the property, Cannon noted. It also told Blaine there was a complaint about the dog “barking and crying all day.”

Repeatedly, Blaine received letters from Village Realty ordering him to clean up the waste. Blaine tried to call Village Realty about the letters but his message was not returned. Nor did the landlord respond to letters he sent to Village Realty, Cannon wrote.

In July 2015, Blaine was told his lease wasn’t being renewed and that he had 60 days to vacate his apartment. Blaine complained to the Human Relations Commission again, claiming Village Realty was retaliating against him for filing his original complaint with the agency.

In upholding the commission’s decision, Cannon cited the agency’s finding that Village Realty’s claim that numerous neighbors were complaining about Blaine’s dog was “dubious at best.”

There were no such complaints until after Blaine filed his first human relations complaint, the commission observed. Blaine spoke with his neighbors who denied complaining about his dog to the landlord, the commission noted, and a neighbor Village Realty called to testify in the case told a commission investigator that Blaine had always cleaned up after his dog.

“What appears to have happened is that Village Realty was on a mission to make it appear that Blaine’s emotional support animal had become such a problem that Blaine’s lease had to be terminated,” a commission hearing examiner wrote.

She found the evidence “supported the finding that Village Realty’s proferred reasons for terminating Blaine’s lease suffered from such weaknesses, implausibilities, inconsistencies and contradictions that the hearing officer could have rationally found them to be unworthy of credence.”