Print Friendly
How much would you pay to collect $2,300 in past due rent? 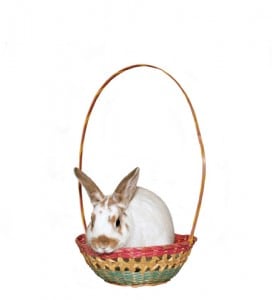 For one landlord, apparently the sky was  the limit as it pursued what must be the longest, and silliest eviction case ever.
It all started when a tenant nailed a display of marshmallow ‘Peeps’ to the outside of her door just around the Easter holiday.  When the decoration remained for a couple more weeks,  the property manager became concerned about the maturation of the pure sugar display.  After the tenant refused to take it down, the property manager disposed of the artwork in the trash.
Dismayed over those actions, the tenant refused to pay the last month’s rent.  The landlord filed an action for eviction and delinquent rent.  The tenant moved out, but counter-sued for $999 in damages that she incurred when she had to deduct money from her pension account to pay for the move.
Then, the craziness began, as news stations around the country, including the infamous Comedy Central show Colbert Report, reported the story as “an attack on Easter.”
During the trial, the tenant was allowed to call a witness whose personal experience allowed him to testify about the shelf life of Peeps.  At one point in the testimony, the judge made humorous comments to the jury, asking if they wanted to take advantage of what would probably be their only opportunity to interview a “Peeps expert.”  But other witnesses who were to testify that Peeps are a legitimate artistic medium, were not allowed.
That’s because the legal issue in this case was not freedom of expression, or even religious discrimination, which the tenant had hinted at initially, but rather whether removing an edible decoration nailed to the outside of a tenant’s apartment door in a shared hallway constitutes constructive eviction.
The jury rejected that claim, but after a few hours deliberation, decided to split it down the middle and awarded the landlord $1,133.  The case has been pending for 13 months.
The next stage of the dispute is for the judge to determine whether the landlord is allowed to add attorneys fees and court costs to the judgement. The landlord previously announced its fees had already reached “tens of thousands of dollars” prior to trial, an amount that exceeds the jurisdiction of the trial court.However, in perhaps the strangest development in this case yet, a spokesperson for the landlord announced it will not seek reimbursement of the fees, but simply request court costs, estimated at about $1,000.
What would you have done in this case?
See Evicted Tenant Enjoys Celebrity Status.