Census Takers to Follow Up with About 48 Million Households Nationwide 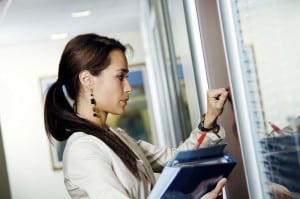 About 635,000 2010 Census takers across the nation begin going door to door this week to follow up with households that either didn’t mail back their form or didn’t receive one. An estimated 48 million addresses will be visited through July 10.

America’s had a very successful first half of the 2010 Census, where more than 72 percent of the nation’s households mailed back their census forms, U.S. Census Bureau Director Robert M. Groves said. But achieving a complete and accurate census requires us to now go door to door to count all the remaining households we’ve not heard back from.

If a 2010 Census worker knocks on your door, here are some ways to verify that person is a legitimate census taker:

The census taker must present an ID badge that contains a Department of Commerce watermark and expiration date. The census taker may also be carrying a black canvass bag with a Census Bureau logo.

The census taker will provide you with supervisor contact information and/or the local census office phone number for verification, if asked.

The census taker will only ask you the questions that appear on the 2010 Census form.

The 2010 Census taker will not ask for social security number, bank account number or credit card number and will never solicit for donations or contact you by e-mail.

In most cases, census workers will make up to six attempts at each housing unit address to count possible residents. This includes leaving notifications of the attempted visit at the house or apartment door, in addition to trying to reach the household by phone to conduct the interview or schedule an in-person interview.

There are just 10 questions on the form and it should only take about 10 minutes to complete.

Census takers will go to great lengths to ensure that no one is missed in the census. After exhausting their efforts to do an in-person interview with a resident of an occupied housing unit, they will seek out proxy sources ” a neighbor, a rental agent, a building manager or some other knowledgeable person familiar with the housing unit ” to obtain as much basic information about the occupants as they can.

Some households will receive a visit even though they may have mailed back their form. If the form arrived too late to be processed before nonresponse follow-up packets were sent to one of the 494 local census offices, the household occupants must still be interviewed when the census taker arrives.

Households that didn’t receive a form by mail, including those that pick up their mail from post office boxes, will be visited by census workers as part of the follow-up plan. The Census Bureau doesn’t mail forms to post office boxes because responses must be associated with a specific residence location, not the post office box location.

The part-time, temporary census workers are hired from the communities they serve to obtain the remaining census responses. Census workers are your neighbors; they are familiar with the neighborhood and are working to ensure that it is accurately and completely represented.

The Census Bureau has stringent systems in place to ensure that people can feel safe when they open their door to a census taker. All census takers undergo an FBI background check that includes both name and fingerprint checks. All have taken an oath for life to protect the information they collect and understand that they face stiff penalties, jail time or both for any disclosure of personally identifiable information.

Note that the Census Bureau conducts several surveys in addition to the 2010 Census. For example, the American Community Survey is sent to approximately 3 million households annually and also involves follow-up from census workers. More information about the American Community Survey can be found on the Census Bureau Web site <www.census.gov/acs>.