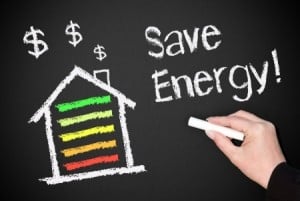 The energy use in Denver’s commercial and multi-family buildings accounts for more than half of the city’s greenhouse gas emissions. In an effort to do something about that, the city soon could require property owners to publicly report how energy efficient — or not — their buildings are.

It’s like Energy Star ratings for appliances or miles per gallon info for vehicles, but for buildings. For now, it’s just that — a rating — but if it doesn’t motivate property owners to voluntarily invest in energy efficiency upgrades, Denver may force the issue.

This is one piece of Denver’s larger climate goals, which include bringing greenhouse gas emissions back to 1990 levels by 2020 and 80 percent below 2005 levels by 2050. Toward that end, Energize Denver seeks to improve energy efficiency in commercial and multi-family buildings by 10 percent by 2020.

An ordinance moved forward this week from the Denver City Council’s Safety, Housing, Education and Homelessness subcommittee that would require commercial and multi-family buildings that are larger than 25,000 square feet to measure and report their energy use. It is scheduled for a vote of the full Denver City Council on Dec. 19.

To protect tenant privacy and energy use patterns that might reveal sensitive information about businesses, the energy use is reported only for the whole building and only once a year. The Energy Star portfolio manager generates a ranking between 0 and 100, with 50 being the national average, and compares buildings to others of similar design and use.

“It helps a building do what miles per gallon does for a car,” said Elizabeth Babcock, manager of air, water and climate for the city of Denver.

The ordinance would apply to some 3,000 structures that account for more than 80 percent of the commercial and multi-family square footage in the city.

So, that’s it? Just a few numbers? What good will that do?

Why? Well, cities make resources available to help businesses and property owners understand what’s driving their energy use and which investments will have a relatively quick payoff. When property owners see how their buildings compare to other similar ones, they might think more about energy efficiency and might be more motivated to make those investments.

The city estimates that $340 million in energy efficiency upgrades like better lighting and new HVAC systems could produce $1.3 billion in savings.

There’s also a certain market pressure. Traditionally, there’s been a split incentive between tenants and landlords. Because most tenants pay their own utilities, they’re the ones who would see the savings from any improvements the landlord makes. But if tenants know what a building’s rating is, they can factor that into their decisions, just like a car buyer looks at gas mileage.

Those are the carrots. There is also a hammer hanging out off screen.

The task force that developed this ordinance for the city had one more recommendation that didn’t make it into the final version. Task force members wanted low-performing buildings to be required to make some upgrades. That got left out because representatives of various business interests objected.

However, the benchmarking program will allow the city to better understand where we’re at now and how far a voluntary program is getting us — and how quickly.

That might forestall mandates in the near future — or make the case for them.

Councilwoman at-large Robin Kniech said as much in the subcommittee meeting.

“For those members of the business community who want to see voluntary programs, this is their chance,” she said. “It’s really going to be up to those business owners and apartment owners to act, but if they don’t, it’s going to be up to us to act. … Our economy depends on this as well as our health.”

And that implicit threat gives people who own and sell commercial real estate some concern.

“The question is: What are they going to do with this collected data and how are they going to analyze it?” said Katie Kruger, CEO of the Denver Metro Commercial Association of Realtors, which presents owners and brokers. “We can feel how fervent the city is about this. Our perspective is that it’s functioning backwards if you force the upgrades before the market is ready.”

The costs of upgrades that don’t make market sense will just get passed on to tenants, Kruger said.

But Matthew Crosby, a task force member who works on utility solutions for Panasonic, told the council subcommittee that companies’ demonstration projects in Japan often found a 25 percent return on investment for relatively inexpensive upgrades.

Sonrisa Lucero, a sustainability strategist with the city of Denver’s Office of Sustainability, said the benchmarking approach works with the market.

“It encourages competition and shares knowledge,” she said. “We don’t see this as being overly burdensome.”

There’s a question floating around in here: Why do this when Denver by itself can’t really stop global warming?

There’s been a big push in recent years from cities to take more action on their own to slow down climate change. Because they’re densely populated and tend to be employment centers, they’re responsible for a large share of global emissions. Because they’re smaller and more politically homogenous — relatively speaking — than nations, cities can arrive at consensus around a course of action more quickly.

And there should be local benefits to reducing energy use, even if Denver doesn’t make much of a dent in the global problem, officials said. Most of our electricity still comes from coal and natural gas, and if buildings use less energy, fewer fossil fuels will be burned to produce it.

“Even if we don’t have a broader impact on this global challenge, locally we can reduce air pollution just by peak shaving,” Babcock said. (Peak shaving means reducing the maximum amount of energy used during the day.)

What about marijuana grows?

This ordinance leaves out agricultural and industrial uses. Despite the spread of marijuana grows, they’re still a relatively small share of the city’s total energy use, Babcock said. But more significantly, an office building can see energy savings from a new HVAC system or changing out the type of light bulb, while energy use in the industrial sector is tied up in specific processes. Reducing energy use will require more tailored solutions for each business — and in some cases the technology isn’t there yet.

But the city is working on it. There’s an entire sustainability push just for cannabis, but it’s on a separate track.

“It’s essential that we address energy use in those facilities,” Babcock said.

Read more
Apartment EV Charging:...
Apartment hunting can be challenging for electric vehicle owners since they see charging stations as a...
Read more
What the Housing Market...
Red hot home sales during the pandemic have cooled and that could have consequences for one of the...
Read more
E-Bike Fires Spark...
A few months ago, after e-bike batteries sent a multifamily building in Brooklyn up in flames, Jan Lee...
Read more
In Last-Minute Vote, LA...
With just one week left until pandemic-era eviction rules were set to expire, the L.A. County...
Read more
White House using...
Read the full White House Press Release Here. The White House announced Wednesday it is taking...
Read more
LA City Council Votes...
The L.A. City Council voted Friday to vastly expand tenant rights by approving a package of new...
Read more
It’s the perfect...
Adam and Tahnya Gaston arrived in this Austin suburb in June with a toddler, a dog and enough...
Read more
Reporting Apartment...
Residents more often pay on time and seek communities that enable rent reporting. Reporting renter...