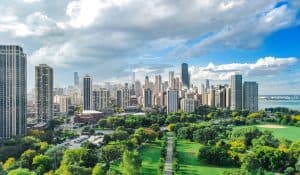 Apartment seekers searching for rentals in Chicago late last year were looking at what may have been the lowest prices the city will witness for the near term future as prices continue to rebound from pandemic lows. Landlords were slashing prices, offering concessions, and working with local, state, and federal aid programs to both lure new renters and ensure existing tenants could remain in their apartments during the pandemic.

But the market is now quickly returning to landlords’ favor.

According to Apartment List, the current median rent for a one-bedroom apartment is $1,190 per month while the median for a two-bedroom is $1,311.

Chicago is not alone is seeing a rebounding rental market. The report indicates that Apartment List’s national index increased by 1.9% month-over-month, representing the largest monthly gain since they began keeping track of rental numbers in 2017.

In terms of year-over-year rental decline, Chicago takes the 10th spot of the major cities tracked by Apartment List. The hardest hit cities include San Francisco with -19% rental growth, New York at -15%, Seattle also at -15%, Oakland with -14%, and San Jose with -11%.

The cities with rental markets that performed well over the past year include Boise, Idaho, which saw a whopping 23% increase in rent growth year-over year, followed by Fresno, California with 13%; Spokane, Washington at 13%; Gilbert, Arizona with 12%; and Toledo, Ohio with 12% growth.

In terms of overall cost of living and affordability, Chicago falls roughly in the middle of the pack.

Read more
The CDC extending the...
The Centers for Disease Control and Prevention (CDC) announced Tuesday it will extend the federal...
Read more
Gateway Apartment...
The gateway markets have been struggling as people left for more affordable areas during the...
Read more
Shuttered Hotels,...
Developers interested in turning old space into apartments and other uses must be licking their chops...
Read more
Which Rental Property...
Which type of rental property flooring is best for you and your tenants to both help with maintenance...
Read more
What Apartment Owners...
Think of a superb hotel experience — one that makes you smile because of the intention and skill...
Read more
Wall Street is buying...
Housing markets are hotter than ever, and big money is getting in on the act. Pension funds,...
Read more
Op-ed: Real estate...
After being hobbled by the pandemic recession, real estate investment trusts are rebounding rapidly,...
Read more
Opinion | With the...
What’s the point of this housing voucher, if there is nowhere for me and my kids to use it?”...