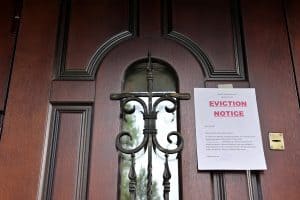 FORT WORTH, Texas — On the morning of April 8, landlord Margarita Palacios went before a Tarrant County, Texas, judge via Zoom and tried to explain why she wanted to evict a tenant who owed $4,350 in back rent.

Palacios, representing The Palace apartments, began to explain, “We sent her links to rental assistance programs and offered to help fill out the applications in our office, but—”

Even as states and the federal government have allocated billions of dollars in assistance, a year into the coronavirus pandemic, more than 14.5 million Americans don’t know whether they can pay their rent, according to a recent U.S. Census Bureau survey.

In the past year, nearly every state, including Texas, has protected tenants through eviction moratoriums. And last September, the Centers for Disease Control and Prevention imposed a federal moratorium to protect public health.

But landlords struggling to pay their own bills say many tenants don’t qualify for the CDC order. And the moratorium in Texas expired at the end of March.

As COVID-19 vaccinations continue and many leaders push for a return to normalcy this spring, some states are ready to let landlords move tenants out. That means residents’ fates are often determined in local courtrooms, before justices of the peace who can decide on their own how vigorously they want to enforce the federal moratorium.

Greg Brown, senior vice president for government affairs for the National Apartment Association, said many of his members have expressed frustration with residents who are unresponsive and don’t show up to court.

The latest estimate for outstanding rental debt nationwide is $58 billion, averaging about $6,000 per renter, according to Brown. He said only 10 cents of every $1 that a housing provider receives is profit, with the remainder going to mortgage payments, property taxes or other operating expenses.

“Many, especially small owners, are in a really tough spot,” Brown said. “Some have had to drain their savings or whatever they have to do to keep the lights on so to speak.”

Stephanie Graves owns a 15-unit property while also helping manage 1,600 units in the Houston area. Her company Q10 Property Advisors has tallied more than $1 million in delinquent rent since the start of the pandemic. She said there is a resident that owes $8,900 and refuses to file for city, state or any government assistance.

“There is no way he is ever going to catch up,” Graves said. “That’s the problem with the eviction moratorium that isn’t seen. The debt doesn’t go away.” Countless people being evicted after accruing delinquent debt will have a really hard time finding housing in the future, she said.

“That’s the crisis we’ve created with this tenant base and these moratoriums,” Graves said. “If they leave before we get the money, then their debt goes with them.”

Early in the pandemic, state and local emergency eviction moratoriums aiming to stop the spread of COVID-19 and keep the newly unemployed in their homes provided some protection to renters. At its peak this past summer, 43 states had moratoriums, according to Eviction Lab, a research organization at Princeton University.

As of April 14, only 13 states still had standing eviction moratoriums, according to Eviction Lab. This leaves renters at an increased risk of losing their homes and opens the eviction floodgates, according to housing advocates.

The CDC moratorium orders landowners not to evict any covered person from any residential property in any state or U.S. territory for nonpayment of rent.

The CDC moratorium is not automatic, however. Tenants must invoke it by completing an affidavit, under penalty of perjury, saying they meet the eligibility criteria. One of the requirements is that tenants attest they have done their best to make timely partial payments and to get government assistance.

When a tenant who has been unresponsive tries to invoke the CDC moratorium during an eviction hearing, Graves and her staff will show the judge emails, texts and written letters that prove the eligibility criteria don’t apply.

Graves said her staff offers help to those who aren’t eligible for the CDC moratorium to apply for the millions of dollars available to Texas renters through various assistance programs.

Through the Coronavirus Relief Fund, the CARES Act provided $150 billion in payments to state, local and tribal governments to help with the impact of COVID-19. In Tarrant County, 2,378 households received $7.9 million in rental assistance allocated through the fund, according to Kristen Camareno, interim director of the county’s Community Development and Housing Department.

The Emergency Rental Assistance program established under President Donald Trump made available $25 billion to assist households that are unable to pay rent and utilities due to the pandemic.

Tarrant County received $24 million from the program, which launched March 29. In the first week, more than 400 people applied, but it can take six weeks before any payments are allocated, said Camareno. Renters qualify for up to 12 months in back rent and three months in future rent from the time of the application.

And in February, Texas began a $1.3 billion rent relief program. At least 72,000 people have completed applications, but by the end of March only 250 had received a payment, according to a report from the Texas House Urban Affairs Committee released earlier this month.

“Personally, yes, I wish we had more time,” Camareno said. “Ideally landlords never have to file the eviction because they’ve heard about our programs and are willing to wait a month or six weeks. But that really puts the pressure on us to make sure to get the word out about the program and that we get in front of this problem.”

Last fall, the Texas Supreme Court’s 34th Emergency Order adopted federal rules and added state rules requiring the CDC order to be included with every eviction citation. The move temporarily halted the eviction process for anyone who could attest they were financially affected by COVID-19.

Almost immediately, the Texas Justice Court Training Center, which provides residential eviction guidance to justice courts, issued a recommendation for judges to allow eviction cases to proceed regardless of the CDC order.

That means most Texas renters outside of Dallas and Austin, which have their own eviction ordinances, are at the mercy of local judges who can choose to enforce or ignore the federal moratorium. Housing advocates were alarmed.

“It makes absolutely no sense to have tens of thousands if not more Texas homeless sitting outside of empty dwelling units that they just got evicted from while right across the street is billions of dollars that could have saved them and bailed out both the tenant and the landlord,” said Mark Melton, a Dallas attorney who’s been helping renters pro bono since the start of the pandemic.

At least four justices of the peace in Tarrant County have proceeded with evictions despite the CDC order, according to Stuart Campbell, a tenant rights attorney with Legal Aid of Northwest Texas, a nonprofit organization that provides free civil legal help to low-income residents.

“This pandemic is not over, people are still out of work and unable to pay for basic necessities like food and housing — that’s why we have these moratoriums,” said Campbell. “I don’t know why, but for some reason Texas wants to be the first to open the eviction floodgates.”

At the virtual eviction hearing this month, Tarrant County Justice of the Peace Curnutt informed Palacios and two other property representatives of the available rental relief programs. She asked whether they would like to have their cases abated for 60 days.

They all said no.

The judge set an eviction date of April 16 for six tenants who were not present.