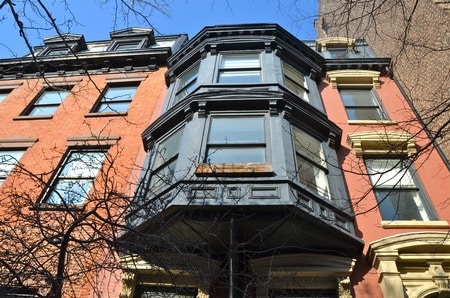 Coronavirus has disrupted New York City in innumerable ways, as life has been upended by the pandemic. Commercial activity and cultural events have all but stopped, and the cabs that are usually a mainstay of the city’s streets have been replaced by an endless stream of ambulances, sirens blazing. MD Asaduzzaman Khan drives one of those cabs, and has been effectively out of work since March 12. With so many people at home, no one is hailing cabs, and it’s putting a huge financial strain on himself, his family, and his neighbors, making it impossible to pay his $1,175 monthly rent for a one-bedroom apartment in Queens.

Khan is one of millions of renters across the country facing financial strain due to coronavirus, whose collective struggle is hurtling the nation toward a housing crisis. With rising unemployment, widespread economic uncertainty, and stay-at-home orders with no end date in sight, the act of paying—or not paying—rent has become front and center as both tenants and property owners argue that they’re not getting enough emergency support and can’t weather months of missed income. This morning, the National Multifamily Housing Council released a report that found 69 percent of Americans paid rent by April 5 this year, a drop from 81 percent last month and 82 percent in April 2019.

Lagging stimulus payments and more expected job losses suggest the problems of April 1 will be that much worse on May 1. Many tenants like Khan might not be able to pay rent, and others are considering broad rent-strike actions pushing for rent forgiveness for the duration of the crisis.

Susanna Blankley, campaign coordinator with the Right to Counsel NYC Coalition, says over the last decade, she’s worked maybe three or four rent strikes total, actions considered dramatic escalations reserved for only the worst landlords. At the moment, she’s working on four, and believes we’ll see “dozens, if not hundreds, of building go on rent strikes by May 1 in New York City alone.” COVID-19 is exposing an existing affordable-housing crisis, she says.

“We have to cancel rent, and if the governor isn’t going to do it, we have a huge base of people ready to organize,” she says. “If we have thousands of people who couldn’t pay rent April 1, we’ll have millions in May.”

The issue isn’t confined to New York City; according to Tara Raghuveer, the housing policy lead for People’s Action, renters nationwide are channeling the “chaotic internet energy” of the last few weeks ago into more organized, tactical actions. In California, a call for a statewide rent strike May 1 is expected to attract 10,000 tenants, according to activists with the Alliance of Californians for Community Empowerment.

Landlords feel they’re being stereotyped at a time when they’re also under financial strain. Jeff Cronrod, who represents the American Apartment Owners Association (AAOA), the nation’s largest landlord trade group, says he understands the need for rent strikes against landlords who are bad actors, but finds those discussing not paying rent while still making money are “opportunistic and totally inappropriate.”

“If we have thousands of people who couldn’t pay rent April 1, we’ll have millions in May.”

Normally, rent strikes gain power by withholding payments. Today, especially for those who can’t pay, it’s about sending a message. Renters don’t want to be faced with the burden of paying back rent when rent moratoriums lift and the economy begins to go back to normal. By not paying, tenants and organizers are making the case that more support is required from the government, and the burden of rent should be temporarily excused—not simply pushed back a few months.

Khan, the 57-year-old Bengali-American cab driver, exemplifies the dilemma facing so many renters. For him, a rent strike is his only option. He’s helped organize 20 other tenants in his 190-unit building in his building to stage a rent strike against the owner, Zara Realty. They hope more will join them by May 1.

Khan says he’s struggled to apply for unemployment online—the system crashes every time he tries to log in—and he’s weighed down financially by his monthly insurance for driving a cab, a $1,000 payment that takes up a significant part of his income.

“Lots of tenants don’t even have the money to pay half or a percentage of their rent,” he says, through a translator, community organizer Rima Begum. “We know there’s an eviction moratorium, but don’t know the timeline of this virus. For me to give the very little money I have toward rent, even if it’s a half payment, puts my family at risk of survival. I think the most I can stretch my money is two or three months right now.”

“We have to be smart with limited funds. We don’t know if we have enough for food, let alone rent.”

Fausto Perez, a 26-year-old retail worker and tenant organizer who lives at the apartment building at 380 East 139th Street in the Bronx in New York City, started a rent strike in April with fellow tenants and the South Bronx Tenant Union against landlord Carlo Careddu. In Perez’s building, the coronavirus crisis was the final straw, not the initial catalyst; cooking gas has been out since October, some exterior rooms lack heat, and there have been on-going rat and mold issues.

“It’s frustrating and discouraging,” he says of the way his family and fellow tenants have been treated. “It feels like we’re in a third-world country and we’re not.”

“Most of my neighbors are like my 70-year-old mom, they work in housekeeping and rely on going out to make a living,” Perez says. “They’re forced to be at home and struggling to make ends meet. We have to be smart with limited funds. We don’t know if we have enough for food, let alone rent.”

Landlords believe they’re being cast as villains, inaccurately portrayed as being beneficiaries of big breaks from the government. Most of the smaller mom-and-pop landlords have ongoing expenses which aren’t covered in any of the mortgage forbearance options, and nonprofit groups that support affordable housing already have very thin margins, and will be strained when tenants can’t pay.

Eric Sussman, a UCLA professor in accounting and real estate who’s also a managing partner of a real estate firm that owns roughly 4,000 rental units across the southwestern United States, fears as the economy worsens, more renters will forego pay.

“If renters are truly able to pay and decide not to, that’ll lead to far greater problems,” he says. “If every tenant says screw it, we can have systemic collapse that can result in additional job losses, longer recovery, and a worse outcome.”

Small landlords especially feel they’re being put in untenable situations. Essie Kendall, 41, a market manager for an insurance company, owns a two-unit townhouse in Brooklyn’s Crown Heights neighborhood where she lives. She charges $2,700 for each three-bed, two-bath unit, or $5,400 for the building. That covers her monthly expenses for the investment property—$4,440 mortgage payment, $600 for maintenance and operations, and about $160 a month to cover property taxes—leaving about $240 in profit.

She says she hasn’t received any April rent, and doesn’t expect to get any in May or June. She had three months of reserves saved up, and when that runs out, she’ll have to choose between paying her own car payments and utility bills or covering the mortgage on her rental property. She’s negotiating with her bank, Wells Fargo, for mortgage forbearance, but has so far been trading emails, with no idea about actual terms.

She says that the message being put out by tenant’s rights groups is that renters “have a three-month pass” due to the eviction moratorium, which is “reckless and sending the wrong message.” None of her tenants have told her they lost their jobs yet.

“One of my tenants is telling me I can apply for stimulus payments,” she says. “I just want to know when i’m getting my rental income.”

“I don’t think most people are ready for half of rents not to be paid in the upcoming months.”

A self-described “do-it-yourself landlord” who rents six units in Chicago, Laurence Jankelow co-founded Avail, a suite of digital tools for smaller landlords to facilitate operations management and payment digitally. He disputes the idea that all landlords have extensive savings and will be fine (a third of landlords won’t qualify for mortgage forbearance, he says, since they didn’t take loans with Fannie Mae or Freddie Mac, and others may take weeks or months to sort out new mortgage payments). Large landlords are flush with cash and fine. Landlords like him have just enough for an emergency repair.

Based on data garnered via Avail, he feels potential payment issues will only become more pronounced. The software, used by 250,000 landlords nationwide, 90 percent of whom have less than 10 units, found that there were 50 percent more instances of unpaid rent in April than in March. In addition, a user survey taken during the last week of March featuring 7,500 renters and 2,500 landlords who use its payment system was sobering, says Jankelow.

“It’s almost traumatic seeing the numbers,” he says. “I don’t think most people are ready for half of rents not to be paid in the upcoming months.”

A majority of renters he surveyed, 54 percent, said they already lost their jobs due to COVID-19, a rate well ahead of government joblessness reports. Of those, 34 percent said they weren’t planning on paying April rent. Most landlords said they don’t have access to quick credit facilities to cover rent; this tells Jankelow landlords aren’t ready.

“The big issues with the federal response right now is timing,” says Jankelow. “There’s huge benefits to the stimulus plan, the timing just doesn’t coincide well with when April and May rent is due. The onus is on landlords to compromise.”

The coronavirus housing crisis has been exacerbated by the government’s patchwork response. Early eviction moratoriums helped stem concerns that tenants would be thrown out of their apartments, and increases in social support found in the most recent stimulus package, including increased unemployment and the one-time $1,200 check, will support those who have lost their jobs. But it’s not holistic. Property owners, mortgage holders, and local governments that rely on property tax revenue will, for the most part, have to rely on these funds trickling up from renters to landlords and onward down the line.

According to Flora Arabo, national senior director of state and local policy for Enterprise Community Partners, the real policy solution is national, government-provided rental assistance. By paying the rent of those who lose their incomes due to coronavirus, it supports every rung of the ladder; renters, property owners, banks. It lets those who lose their jobs focus on paying for important necessities, such as food and medicine.

Right now, some financial assistance programs are taking shape at the city and state level, filling in gaps in federal assistance. But that’s a Band-Aid, not a long-term solution. Only the federal government, which can take on debt states and cities can’t, can fund such a program at the necessary levels.

Local legislation to help tenants with rent reductions or even rent holidays—such bills have been proposed in San Jose, California, and New York—is being met with fierce opposition from the landlord industry.

Arabo agrees. “A rent holiday isn’t a solution,” she says. “I know people are in crisis mode, but people need to stop approaching this as if everything is going to be fine in two months. This isn’t just a pandemic, it’s the first few weeks of a recession.”

Right now, she says, “everyone is screaming at everyone else.” That’s all the more reason for government to step in and fix the problem with a more thoughtful, holistic, long-term solution.