Basement Conversions, Touted As A Housing Solution, Need To Adapt To Climate Change 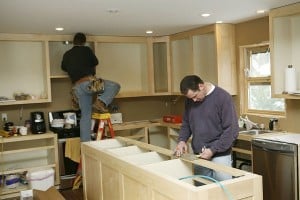 Basement dwellings have been eyed as a relief valve for Boston’s housing crisis, but a summer with record rain and fatal storms down the East Coast shows they may come with dangerous risks.

Hurricane Ida killed 11 New Yorkers earlier this month in basement units, some in illegally converted residences. Basement residence owners in Boston, fewer in number than New York City, weren’t hit with the same severe flooding but experts say they could be vulnerable to future storms.

But the city has yet to offer thorough guidance on flood mitigation measures for basement dwellings. Flood resilience upgrades can cost property owners thousands of dollars that are unaccounted for in the program as written, a hurdle for the growth of a platform housing advocates believe is a crucial benefit to both landlords and housing-starved tenants.

“If there are to be resiliency-specific changes, there should be some funding associated with that that homeowners can tap into no matter what their income levels are,” said Michael Chavez, an architect and project development manager at YouthBuild Boston who has worked on more than 20 basement conversions.

The ADU program, being piloted in the Dorchester, Jamaica Plain, Mattapan and Roslindale neighborhoods, allows owner-occupants in three-unit or smaller buildings to convert basements, and other unoccupied spaces like attics and garages, into homes.

The program was expanded in 2019, at which point 55 applications were filed with the city’s Inspectional Services Department for ADUs, 88% of them for basement conversions, the city said. It has thus far yielded fewer than 100 combined proposed and completed projects for conversions of homeowner space into units, with the majority of residential units in basements. The number of existing basement units operating illegally or through loopholes is unknown.

As the city pushes to increase the stock of new units, it will need to consider how flood mitigation factors into design and cost, property owners say.

“There’s just a lot of grandfathered-in, legacy conditions that are not going to work in a 100-year flood event,” Boston-based multifamily developer City Realty Project Manager Jacob Simmons said. “Creating the new basements is not the issue, but the challenge is how do we retrofit those existing basement units?”

Basement dwellings’ likelihood to flood hasn’t been addressed by City Hall or the Boston Planning and Development Agency since Ida, and representatives for the city’s Inspectional Services Department, which issues occupancy certifications, didn’t respond to multiple requests for comment. The lone mention of the basements in Boston’s mayoral race came last week before the primary election, in which former Boston economic development chief John Barros, who finished fifth in the Boston mayoral primary, raised alarm.

“The flash flooding that we saw in New York and New Jersey would be what would happen here: poor immigrant families living in basement apartments who lost their lives,” Barros said during NBC Boston’s mayoral debate last week.

The BPDA this week approved zoning updates to address rising floodwaters and sea-level rise at new construction projects, but a representative didn’t respond to a request for clarification if the guidelines apply to basements.

The Coastal Flood Resilience Zoning Overlay District, if approved by the Boston Zoning Commission next month, would limit building uses below the new Sea Level Rise Base Flood Elevation level to storage and parking. New construction would have to be built above the SLR-BFE rather than at grade. The SLR-BFE is based on a 1% annual chance flood event with 40 inches of sea-level rise by 2070, according to the city.

“We must take the steps that will better protect our neighborhoods from the increasing threat of coastal storms and sea-level rise,” acting Mayor Kim Janey said in a statement about the overlay district. “By requiring developers to do more in vulnerable areas, we are protecting our infrastructure, our jobs, and our homes.”

Protecting and adding to the city’s housing stock has been a recent focus of the city of Boston. In the last decade, under then-Mayor Martin Walsh, the city introduced a goal of 70,000 affordable homes by 2030, and City Hall’s Department of Neighborhood Development and the Housing Innovation Lab have introduced pilot programs to allow for creative housing production, although progress has been sluggish.

“There are few policy changes that could generate more units, more quickly and economically, than this,” Percelay wrote in a recent Boston Globe op-ed.

The ADU program and others like it are aimed at alleviating a red-hot housing market where homes today average more than $700K and rents are among the highest in the nation.

“Developers are buying houses like mine, making it into three condos and asking $400K each,” said Mattapan retired teacher and basement converter Wesley Williams Jr., 74. “This whole thing with the ADU allowed me for extra income when I can’t work anymore.”

Williams converted his basement at his 123-year-old home into a dwelling for an undisclosed amount and is in the process of obtaining an occupancy certificate to market the unit, he said. He paid approximately $3,500 for a high-grade foam insulation that would help with stormwater mitigation. His fieldstone foundation was in good shape, said Chavez, who was Williams’ architect. Water can seep through joints in the fieldstone foundations common among Boston’s older housing stock, a problem Chavez said he’s seen at other basement projects. Williams’ unit also includes a dry well to capture stormwater.

Despite the flood mitigation measures, the remnants of Ida passing through Boston filled Williams’ basement with a few inches of water. Williams removed approximately two gallons of water from his basement with a shop vacuum, he said. Chavez and Williams are going to assess the unit next week and determine where the water seeped through — both men said they believe it may have entered through a doorway.

“I’ve heard it several times, we’ve never seen water like this,” Keller said. “I think that’s the worst part of working in Boston, there’s nowhere to go with water.”

Boston’s dense neighborhoods are composed of the same paved concrete that prevented rainfall from absorbing into the ground in New York City, which caused it to rush into subway platforms and basement apartments earlier this month.

Boston’s stormwater system can handle a rainstorm that drops about 5.15 inches of water in 24 hours, according to the Boston Water and Sewer Commission, reported by WBUR. New York was inundated with between 6 inches and 9 inches of rainfall during Hurricane Ida, including 3 inches in one hour on Sept. 1 in Central Park, causing the fatal basement floods, NBC New York reported.

Boston’s ADU program requires an elevation certificate from a licensed land surveyor, engineer or architect showing the top of the bottom floor of a basement sits above the Federal Emergency Management Agency Flood Zone. But rising floodwaters and increasingly severe storm events could threaten these units in the coming decades.

The sea level in Boston is rising about 1 inch every eight years, according to the National Oceanic and Atmospheric Association, and sea level is expected to reach 16 inches by 2050. Boston today has 19,000 homes and businesses at risk of flooding, or approximately 19% of the city’s building inventory, according to a First Street study reported by the Boston Globe.

Waterproofing a basement is possible through measures like digging window wells, regrading of the site and underground stormwater retention tanks, Keller said.

“I think that the technical ability to respond to these problems is there,” he said of flood mitigation. “It’s just kind of, how many buildings are up to that technical level?”

Percelay, who lauded the units earlier this summer, said he doesn’t see Boston’s basement stock in places like Allston and Brighton being challenged the same way New York’s were. The Mount Vernon Co. didn’t see any flooding in basement spaces among its approximately 2,000-unit portfolio, he said. The relatively quick and easy conversion of basements and the need for housing outweigh any hesitation over ADUs on climate concerns, at least in the near term, he said.

“If the severity of climate change gets to that point, then you modify it,” Percelay said of the ADU program. “But you might have 30 years or 40 years to do so. It’s not a clear and present danger.”

Even those who do see more current risks with flooding in basement units still champion the program as a boon to both landlord and tenant. While stormwater mitigation may cost thousands of dollars, it can increase the value of a home by $10K to $15K if a basement unit is waterproof, Chavez said. Williams called the investment worth every cent.

“People understand what that means and the investment is not so scary anymore,” Chavez said.