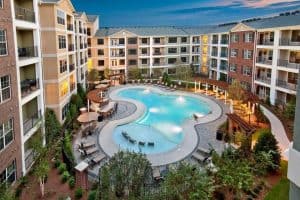 There is no better visual depiction of urban development than seeing an old parking lot replaced by an edgy tower apartment building. If just a few short years ago it was a sensation to see the incessant rise of luxury rental buildings in our cities, by now they are beyond pervasive. As recent as 2015, three-quarters of the new apartment construction completed that year were high-end. In 2017, the construction of luxury rental properties had risen to 79% of all apartment construction in the U.S.

Encumbered by high construction costs and encouraged by a surge in demand for rentals, developers have bet big on high-end apartments. Back in 2012, high-end properties represented about half of all new completed construction, but now these projects occupy the lion’s share of the multifamily industry. Of the 1,600 large-scale apartment buildings completed in 2017 in the U.S., 1,270 (or 79%) classify as high-end properties, according to property data and quality ratings by Yardi Matrix.

Aiming even higher, 2018 is shaping up to be another year for apartments at the top end of the market. Nationally, about 87% of all large-scale apartment buildings completed in the first half of 2018 are high-end.

The rise of upper-end apartment buildings has continued unabated in all of the U.S. regions from 2015 to 2017, with Southwestern and Mid-Atlantic developers focusing on luxury the most.

Currently one of the most economically vibrant regions in the U.S., the Southwest has seen an explosion in real estate construction, with Texan metros among the nation’s leaders in apartment deliveries. Riding the wave of high demand and population gains, area developers built an impressive 88% of apartment developments of high-end quality last year.

In the Mid-Atlantic, 87% of apartments opened in 2017 were high-end, a similar percentage to two years prior. The Midwest ramped up the construction of luxury apartments significantly since 2015, as any Chicagoan can tell you just by glancing at the city skyline today. From 73% two years prior, high-end apartment buildings in the Midwestern region went up to 82% of all multifamily construction in 2017.

The most active metros in the high-end apartment segment last year were neither New York nor L.A. Metro St. Louis has built nothing but high-end apartments in 2017. Supported by local tax breaks, the urban rehabilitation of St. Louis is driven by luxury developments in an attempt to attract new residents. The luxury market is also thriving in Las Vegas metro — where 100% of the apartments built in 2017 were luxury — boosted by Californians moving to Vegas in greater numbers and the area’s great economic outlook.

But in terms of scale, nowhere is the luxury segment flourishing more than in Texas. Giant real estate hubs Dallas-Fort Worth and Houston metro take the third and fourth spots, with 98% and 97% respectively being high-end projects in 2017. Both urban and suburban areas of Baltimore, Cincinnati, Boston, Kansas City, and Atlanta have exceeded 90% high-end apartments of new deliveries. The lowest shares of high-end rental properties in 2017 were in San Diego (40%) and San Francisco (68%).

In 2018, most apartment communities that cut the red ribbon in the first half of the year are also high-end. Granted that the 2018 construction data is subject to be revised at the end of the year, preliminary numbers show that six metros of the nation’s top 30 largest have opened only luxury apartments in the first half of this year: Dallas-Ft. Worth, Houston, Kansas City, Charlotte, Detroit, and Cleveland-Akron metro areas.

16 cities are getting exclusively high-end rentals in 2018

Of the nation’s 30 largest cities, there are 6 urban areas were renters saw nothing but high-end apartments in 2017, while in the first part of 2018, there are 16 cities where all new apartments are luxury-grade.  Dallas, Fort Worth, Boston, Las Vegas, Baltimore, and Louisville, KY are on the 2017 list. Pricey cities like San Francisco, L.A., Denver, and Chicago are on the 2018 list alongside more affordable ones, like Jacksonville, Detroit, Charlotte, and El Paso.

Apartments in Houston, Nashville, Phoenix, and Washington, DC were also heavily concentrated at the high-end in 2017. The new stock of apartments launched last year in these cities was over 90% luxury. By contrast, two cities had low shares of high-end apartments completed last year: San Diego with 46% and El Paso, TX with 56%.

As the demand for high-end rentals is more limited than that for affordable and moderately-priced rentals, in some parts of the country the luxury apartment market is reaching saturation. Here are 10 cities where high-end construction has decreased since 2015:

Where are we in terms of total stock of high-end rentals to date?

The long streak of record-level construction of recent years has added significant numbers of high-end apartments to the residential landscape in many cities across the nation. But which cities have been affected the most overall? We added up the total number of large-scale high-end apartment buildings out of the total stock of large-scale apartment buildings in the nation’s biggest cities and then ranked them by the largest total share of luxury buildings as of mid-2018.

Charlotte, NC ranks first, having built so many high-end residential properties they now represent half of Charlotte apartments. Not far behind is Austin, with 45% of its apartments of high-end quality. Nationally, high-end apartments currently make up 23% of all apartments located in large-scale apartment developments. Here’s the full ranking:

This report was compiled by RentCafe.com, a nationwide apartment search website that enables renters to easily find apartments and houses for rent throughout the United States. The apartment construction data was provided by Yardi Matrix, a RENTCafé sister company specialized in apartment market intelligence, providing up-to-date information on large-scale multi-family properties of 50 units or more in over 130 U.S. markets. Based on Yardi Matrix’s definition and classification of the apartment market, high-end or luxury rental properties are those that fall into the discretionary (Class A+/A) and high mid-range (Class A-/B+) asset class categories.

Data on property completions in 2018 is current as of June 2018 and is subject to change. The percentages used in this report represent the share of multi-family properties classified as Asset Class B+ and above out of the total multi-family properties in the markets studied. The regions and metro areas included in this report are defined as per Yardi Matrix’s market boundaries and may be different from the regional boundaries and metropolitan statistical areas as defined by the U.S. Census. New York City data covers the boroughs of Manhattan, Brooklyn, and Queens only.