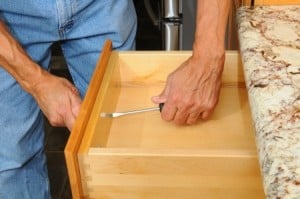 House flipping has gained notoriety from TV shows like HGTV’s “Flip or Flop” and A&E’s “Flipping Vegas,” but chances are the person who flips your potential future home won’t have a TV crew documenting the work. Horror stories abound of house flips that hid major problems, only to be revealed months after the new homeowners moved in.

Real estate investor Stewart McCullum renovates properties in the Seattle area to rent and sell. He says it can be tricky to discern the good from the bad flipped houses, simply because contracting for flipping is largely unregulated, which makes it hard to tell who has the adequate skill set and experience. “There’s so much gray in the world of contracting, and that’s why things go wrong,” he says.

When considering a flipped house, it’s best to tour with a skeptical eye. Don’t focus on your favorite details in the updated kitchen and bathrooms too much, and follow these steps to catch any faults in the home that may be lurking beneath the surface.

Check all the appliances and faucets. The majority of work in flipped homes is often in kitchens and bathrooms, and turning on the water in those rooms can be a quick indicator of any plumbing issues.

Reuben Saltzman, co-owner and president of Structure Tech Home Inspections in Minneapolis, has seen numerous house flips that have plumbing issues due to shoddy workmanship on hooking up water hoses. “I found a shower once plumbed where they ran hot water to both the hot and cold side. All you could get was hot water coming out of the shower,” Saltzman says.

Turning on faucets will also signal if there are issues with the water pressure, or in some cases, if the hardware hasn’t been hooked up to a water source at all.

Look under the cabinets. House flippers often focus on the cosmetic appeal of the home rather than the functionality. Check the cabinets beneath sinks and other the areas you can easily open to see the beneath-the-surface work.

Look under the kitchen sink, particularly at the garbage disposal, recommends Jim Davis, owner of About the House Inspection Services in Houston. If you see that the drain lines, disposal and wiring have been spray painted, it’s a sign the flipper or contractor is covering up a dated disposal, an appliance he says is often neglected in a flip.

Eye the baseboards and paint. When it comes to basic cosmetic work, trust your instincts, says Nathan Brooks, a real estate investor and owner of Bridge Management LLC in Kansas City, Kansas. If baseboards or paint lines look uneven, it can be a sign that the flipper made shortcuts throughout the house.

“People may not know how you cut [baseboards], but they know if it looks right,” Brooks says, recommending you look at how the floor, baseboard and wall meet to check for straight lines.

Ask to see the attic. An unfinished attic is not typically a place people look on a home tour, but a quick stop could reveal what may be lurking behind that new drywall in every room.

Saltzman says in his experience, the attics in flipped homes don’t receive necessary maintenance, and you’ll find poor insulation, roof leaks and even major safety hazards like wiring defects. “A lot of the time [flippers] just threw in whatever they wanted, and nobody touched the attic space because, well, homebuyers don’t see that,” he says.

Walk over to the water heater. If it looks old, it probably is old. Water heaters are a major expense when it comes to fixing up a home, and Brooks says it isn’t hard to tell when it hasn’t been updated – most have a sticker that indicates the date the appliance was made. If the sticker shows a date in the last decade, you should be safe, but any older and you could soon be buying a new water heater, which can range in cost between $600 and more than $2,000.

“If it’s a few years old, no big deal. But if it’s rusted out, and it looks terrible and it’s [from] 2002, then you’re going to want to calculate that you work into your contract to have a new hot water heater,” Brooks says.

The appearance of plumbing around the water heater along with other visible pipes in the home can also indicate whether plumbing work was recently done. If pipe sections are made of different materials, it could mean only part of the pipe was fixed. Rusting is another sure sign of old pipes that need attention.

For homes he intends to rent or sell, Brooks says he has his contractors use a checklist to ensure the plumbing meets expectations and reduces the chances of future problems. If you’re a buyer touring a home, he recommends going through a mental checklist and asking yourself, “Are there a bunch of different pieces? A bunch of different materials? Or does it look new, just on appearance?”

Check for permits where applicable. Before purchasing a flipped home, seek information from the city on any permits taken out, or pulled, during the seller’s ownership. A lack of permits in a municipality that requires them should be a major red flag, Saltzman says.

“Make sure permits were inspected and approved, not just pulled,” he adds. This will tell you if a third party verified that the job was done right.

Unfortunately, not every municipality requires permits. Davis says there are many unincorporated subdivisions surrounding Houston, but because they do not fall under the same ordinances as properties within city limits, they don’t require permits on any work done to a home.

When you can’t obtain permits, McCullum recommends asking the seller about the renovations to get an idea of the extent of improvements that may or may not have been done on the home. “There’s [flippers] that put just lipstick on a pig, where they’re just doing paint, carpet, and they’re turning it. But did they do anything inside the walls? What is the scope of their work?” he says. “And that way, the inspector will have a better idea of exactly what to drill in and look for.” Which means you should …

Hire an inspector. One of the biggest mistakes a homebuyer can make when purchasing a recently flipped home is skipping the inspection process. But it can be all too tempting when everything you see is new.

Davis and Saltzman insist homebuyers hire a professional to inspect the home before the closing process begins. That way, it won’t be too late to cancel the purchase if the inspector finds leaks or major problems.

Furthermore, to ensure there is no bias toward the seller, make sure the inspector is someone you hire and vet. A thorough inspection could be a far less expensive way to vet your home than to find yourself underwater – both literally and figuratively – when you purchase a rehabbed home from investors.