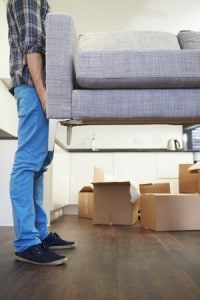 After two years of being homeless, napping in stores open all night and more recently staying in a convent in Harlem, Margot Miller found out in March that her luck was about to change: She had qualified for an apartment for low-income older adults.

“This is to inform you that a rental unit has become available,” the letter from the building’s owner, Prince Hall Plaza, began.

Elated, Ms. Miller, 68, said she immediately went to the building’s office to claim the apartment. But after a background check, she said, the building reversed course.

“I go there, I’m all excited,” Ms. Miller said. “The woman there then does something on the computer. Then she said, ‘You can’t have this.’”

She was disqualified, the woman told her. Not because of her credit score. (At 760, hers was stellar.) And not because of a criminal record. (She had none.)

Ms. Miller had another factor, it turned out, working against her: She had been sued in housing court by her landlord. That was enough to land her on something known among housing advocates and lawyers as the tenant blacklist, which is compiled by tenant-screening database companies from housing court records. Prospective landlords in New York City, as well as across the country, use the list to weed out risky tenants. But housing lawyers say the list is filled with errors and includes tenants who won their cases or legally withheld rent because of horrible living conditions. Once tenants end up on the list, renting an apartment can be impossible.

On Tuesday, Councilman Benjamin J. Kallos, a Manhattan Democrat, introduced legislation to the City Council’s Consumer Affairs Committee that would force screening companies to provide more complete descriptions of housing court cases, including records that show when tenants won, or when an apartment was decrepit.

“No one should be condemned to being homeless just because they were in housing court,” Mr. Kallos said.

While there are certainly troublesome tenants on the list, housing advocates say its use by landlords exacerbates the affordable housing crisis in New York, putting apartments further out of reach for poor people.

“There are a lot of tenants who are terrified of complaining or of withholding rent because they are afraid of getting on these blacklists,” said James B. Fishman, a lawyer who has settled two class-action lawsuits against tenant-screening companies.

Like most housing court cases, Ms. Miller’s is complicated. She owed back rent. Her daughter’s name, not hers, was on the lease. But the apartment also had holes in the ceiling, a bathroom leak and no cooking gas for months. Ms. Miller said that she agreed to leave in early 2014 because she was scared to stay, and that she moved out shortly after a final eviction notice. She said she had no idea that her decision might doom her in her search for a new apartment.

“It’s taken my life away from me,” Ms. Miller, an artist who goes by the name Lumiere, said. She has been staying at the convent, but the people who run it want her to find a new home. “Virtually taking my life away,” she added. “My health is affected, everything is affected. It’s inhumane.”

A spokesman for the federal Department of Housing and Urban Development, which provides the subsidies for older adults in the Prince Hall Plaza building, said the agency does not refuse people with prior evictions. But the owners of apartment buildings receiving subsidies, who sign contracts with the agency, can use their own screening tools.

Lorraine Carrington, who signed the original letter from Prince Hall Plaza and who Ms. Miller said claimed that the housing agency would not accept tenants with evictions, said she knew Ms. Miller but declined to comment.

It is unclear whether Mr. Kallos’s new bill, one of a number designed to protect tenants now pending in the City Council, would significantly change landlords’ behavior. Evicting a problem tenant can take months in the city, and landlords are reluctant to take a risk in such a tight market, when tenants are easy to come by.

“The tenant-screening lists are very useful to owners who are looking at housing court records as one element in their evaluation of potential tenants,” said Frank Ricci, director of government affairs for the Rent Stabilization Association, a trade group that represents landlords. “It’s important, not just for the owner, but to the other tenants in the building, who might be hurt by a pattern of a tenant withholding rent for frivolous reasons.”

Past efforts to curb abuses by tenant-screening companies have had limited success. The state’s Office of Court Administration, which operates New York’s court system, used to sell a daily data feed of housing court cases to the companies. After years of complaints, the office in 2012 stopped including tenants’ names and addresses in that feed.

Any victory was short-lived. Companies determined to stay in the business began sending people to housing courts to type in the information by hand; other screening companies bought that information. Recently, a man sat at a table in Manhattan housing court typing in the names and addresses for hundreds of index numbers. As he typed, he watched an episode of “Game of Thrones.”

In 2014, the Council passed legislation requiring landlords, property managers and brokers to disclose which screening company, if any, they used for background checks. Tenants can order their files from the companies and correct inaccuracies.

But for people who live on the margins, without a permanent mailing address, fighting the list can be difficult. Until they are denied housing, some tenants have no idea they are on the list at all.

Mesline Louis, 35, was evicted from her Brooklyn apartment for nonpayment in 2011, despite her claims that she did not owe the landlord any money. On the day she was evicted, Ms. Louis said, rain was coming down in sheets as she trudged to the subway with her three children, manually pumping oxygen for her son Nathaniel, who has a lung disease.

But things only got worse. Since then, Ms. Louis estimates that she contacted three dozen apartments. Each time, the answer was no. About a year ago, she learned she was on the tenant-screening list.

Most of the time, Ms. Louis worries what will happen to her kids if she cannot find an apartment. “I just don’t want them to be another statistic,” she said.