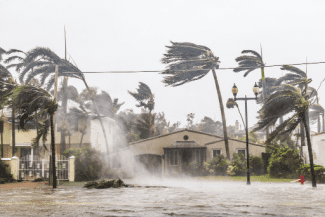 Florida’s Tampa Bay, one of the country’s hottest real-estate markets, has experienced a surge in construction and property values in recent years. Now, much of that pricey real estate risks ending up under several feet of saltwater.

That is according to the National Hurricane Center. Hurricane Ian, which strengthened to a Category 4 hurricane early Wednesday, is expected to make landfall just south of Tampa later on Wednesday.

Apartment and office buildings, hotels, shopping centers and other commercial properties worth around $1.5 trillion sit in the storm’s forecast path in Florida and nearby states, according to data provider MSCI Real Assets.

Tampa is the biggest property market on Florida’s west coast, and it has the most at risk. Developers there are bracing for what is expected to be the worst storm to hit the region in a century, fleeing to higher ground, tying up loose lumber and roofing tiles, and draining artificial lagoons.

While many of Tampa’s recent property developments were designed to weather powerful storms, more mature properties are unlikely to fare as well.

Older homes on the region’s prized barrier islands are particularly vulnerable, said Jon Mast, the chief executive of the Manatee-Sarasota Building Industry Association. Newer homes further inland are likely to be built 12 feet or higher above sea level, he said, but older homes, including many on islands, were constructed with as little as 5 feet of floor elevation.

More than one million homes and multifamily buildings, with a replacement value of more than $258 billion, are at risk of storm damage because of Hurricane Ian, according to housing-data provider CoreLogic.

As more Americans migrate to warmer Sunbelt cities, Tampa has been one of the biggest beneficiaries. The metro area has experienced rapid job and population growth, and it now ranks among the highest in the U.S. for accelerating home prices and rising rents.

Since late last week, however, home builders across the region said they have been halting construction activity and are preparing building sites for heavy winds, strapping building materials into large bundles.

Metro Development Group, which develops master-planned communities in the Tampa area, has been busy preparing its properties for the storm. The company is partially draining artificial lagoons to prevent them from overflowing in the rain, said Vaike O’Grady, vice president of marketing and communications.

It is also deflating the inflatable obstacle courses that normally float on the lagoons, removing socks from storm drains, locking pool gates and hiding away any marketing flags and banners that might blow away in the storm, Ms. O’Grady added.

Downtown Tampa, with its gleaming hotels and office towers, is also vulnerable. In the Tampa Bay area alone, almost 17,000 commercial properties and apartment buildings spanning 182 million square feet are in areas at high risk of flooding, according to real-estate data company CoStar Group.

Billions of dollars of private and public funds went into the redevelopment of Downtown Tampa’s waterfront in recent decades. Many of these buildings are in an area that is at high risk of flooding, according to data from CoStar. The properties in the high-risk area include a convention center, a 727-room hotel, an ice-hockey stadium that is home to the Tampa Bay Lightning and, across the bridge, one of Florida’s largest hospitals.

At the city’s tallest building, office tower 100 North Tampa, owner PGIM Real Estate is stacking up sandbags in anticipation of floodwaters. The company said it is also moving elevators away from ground floors and shutting down the building’s heating, ventilation and air-conditioning system and mechanical equipment.

The centerpiece of Tampa’s new waterfront is a $3.5 billion project named Water Street Tampa that is being developed by a venture that includes former hedge-fund manager and Lightning owner Jeffrey Vinik and Cascade Investment LLC, the investment firm of Microsoft Corp. co-founder Bill Gates. Its first phase, which is set to be completed this year, includes hotels, apartments, office and retail space, and an entertainment venue.

Like most new developments in Florida, Water Street Tampa includes mechanical and electrical systems and other infrastructure designed to withstand strong hurricanes. Rooms housing these systems are located on the upper stories of buildings, sometimes as high as the sixth floor. Roof-mounted systems are designed to withstand 150-mile-an-hour winds and all new buildings are 11 feet or more above sea level.