How to Rehab Apartments to Catch the Boomer Wave 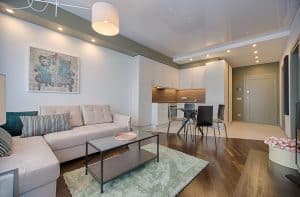 When it comes to rehabbing apartments for baby boomers, start with your surroundings, and then look within.

That’s the consensus from developers and designers relaunching existing apartment communities to cater to this lucrative demographic, which is the fastest growing segment of apartment renters.

While millennials often begin their apartment search out of necessity for housing near a job, baby boomers are looking for apartments by choice, and they have the means to pay for what they want. That means they often begin by targeting neighborhoods rife with amenities that allow them to enjoy an experience-rich lifestyle.

“Boomers and seniors today are healthy and wealthy,” says Mary Cook, president of Chicago-based multifamily design firm Mary Cook Associates. “They want resort-quality amenities, spaces and programming that are not only experiential but also foster friendships and community.”

“Downtown apartment communities are a good option as places to age gracefully within the urban context,” Banta says. “They offer access and walkability to lakes, rivers, trails, city parks, and other downtown amenities. When designed with an urban or metropolitan feel, these types of buildings lend themselves well to rehabs for baby boomers.”

For Larry Curtis, president and managing partner of the development arm of Boston-based WinnCompanies, which operates 61,000 units nationally and specializes in adaptive reuse of historic buildings, that means targeting older communities in prime locations.

“You have to start off with an inherently well-located piece of real estate,” Curtis says. “That 1970s, side-of-the-road apartment building has advantages, because they’re generally built in first-generation development sites, off the main artery or with drive-by visibility.”

They also have the benefit of size. While today’s new development apartments have trended smaller as construction costs have risen, older buildings have larger footprints. Often, that means an older two-bedroom apartment is large enough to be converted into a three-bedroom unit today, with the third room doubling as a study, office, or den.

And that’s exactly what boomers want.

“They want space,” Curtis says. “Millennials are willing to consider micro units, but boomers want higher ceilings and more square footage. I’d rather buy a bland building that I could sexy up that has existing 1,100-square-foot, two-bedroom apartments than a newer building with 850-square-foot units.”

But while these properties make a great start, that doesn’t mean rehabbing them to today’s standards is easy. “You can’t just clean up the outside of an apartment building and expect to appeal to boomers,” Curtis says. “The work done on the inside has to be real because they will not accept fake, cosmetic changes.”

That means expanding and brightening tired hallways, refitting spaces inside units to install washers and dryers, and converting the old common laundry area into a more social space, such as a café. A separate, or brand-new clubhouse, is often a must.

“You can also take that old computer learning center of yesteryear and turn it into a co-working space, with a semi-private area off the lobby,” Curtis says.

Speaking of lobbies, boomers also want to feel a sense of place as soon as they walk in the door. “They want a gracious, welcoming lobby, and staff or a concierge to greet them at the door,” says BKV’s Banta.

That type of design should be mirrored within the units, too.

“When walking into their apartments, boomers want a foyer—and while it doesn’t need to be big, it needs to feel like a zone,” says Russ Garber, director of the senior living studio at Columbus, Ohio-based M+A Architects. “The floor plan has never mattered more than it does to the boomer generation. It’s important to boomers that they don’t walk straight into a kitchen, but instead have flow to move within the space.”

Also don’t forget what is often the primary motivator for boomers looking to downsize and relocate: to be near the grandchildren.

“‘Baby chasing’ is a term you are going to hear more about and see reflected in design,” says Garber. An example is that while boomers typically prefer shower stalls in the master bath instead of tubs—an element they perceive as outdated—they often want a tub in a secondary bath.

“Second bathrooms are of higher interest, with a demand for traditional bathtubs in there, to allow access for bathing grandkids,” Garber says.

By focusing on location first, and then designing within to suit boomers’ active lifestyles, apartment professionals can rehab existing buildings to appeal to this growing and lucrative rental demographic.