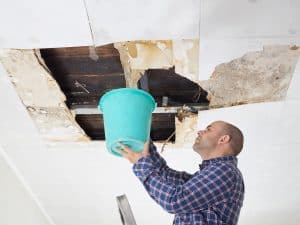 María Lara and her 10-year-old daughter, Ashley, live in Langley Park, Md., a densely populated, low-income suburb of Washington, D.C. She says the worst part about living in the Bedford and Victoria Station complex, a multifamily residential property, is that she and her daughter don’t feel safe.

“These apartments are rotten,” Lara says, because the place is “roach- and mice-infested, water leaks everywhere, [the] walls have holes and pipes are exposed.” Her kitchen floors are buckling, and Lara can see down to her neighbor’s first-floor apartment.

“I feel like the ceiling is going to collapse on us or we are going to fall on my neighbor below us,” the 44-year-old native of El Salvador says.

Ashley worries about being bitten by bedbugs or rodents at night.

“Sometimes my daughter wakes up in the middle of the night when she hears rats and mice roaming around,” Lara says, fighting back tears. Ashley asks her mom if rodent traps are set up in the apartment. “She’s anxious and stressed and often develops difficulty breathing.”

Lara, along with six more residents, is a plaintiff in a class action lawsuit filed in the U.S. District Court for Maryland this week against their landlord, Arbor Realty Trust Inc., and its subsidiaries. The complaint alleges violations of the Fair Housing Act, including intentional discrimination based on race and national origin. The company’s business strategy, the complaint alleges, involves the “intentional targeting of these low-income communities of color.”

“Basic maintenance and necessary repairs to both properties have been ignored and neglected to the point that the exclusively minority families living in them are forced to live in conditions that belie expected housing conditions in the region,” the complaint states.

CASA de Maryland, an immigrant advocacy organization headquartered in Hyattsville, Md., organized the tenants for months and is also a plaintiff in the case.

“The conditions at the BVS [Bedford and Victoria Station] properties, deteriorating in real time around the families living in them, would shock the conscience of most Marylanders and others living only a short distance away,” according to the complaint.

The Bedford and Victoria Station complex is managed by Ross Companies, a defendant in the class action. According to the company’s website, Ross is “a premier owner, renovator and manager of multifamily assets in the Mid-Atlantic region since 1983.” NPR reached out to the company’s public relations office in Bethesda, Md., and was told that “the company has seen the complaint, but it’s not talking to the media. We speak with our residents.”

NPR reached out to Arbor Realty Trust but got no response to requests for comment. According to the complaint, the company owns “over 8,000 units and has acquired more than $1.75 billion of multifamily properties across the country.”

Like many immigrants, Lara says crushing poverty pushed her to migrate to the Washington area in 2006. She thought life in the U.S. would be easier, but it has been a struggle. Ashley’s father abandoned them when Lara was expecting the baby. Lara works in construction, cleaning and prepping materials — work that isn’t always reliable. The coronavirus pandemic severely cut her work hours to less than half.

Lara has lived in the Bedford and Victoria Station complex since 2009, and though Lara says management has neglected the units for a long time, she says that the pandemic lockdown seems to have emboldened her landlord. When she has asked for needed repairs in her unit, “the manager says, why don’t you leave if you don’t like it here?”

If she could, Lara would move, “but I don’t have options. I barely have money to feed my daughter.” Last year, she says, she was forced to skip rent.

“I had to cancel internet last year because I’m only working two or three days a week,” says Lara, who adds that she is grateful for a neighbor who shares their internet password so Ashley can attend school virtually.

“All I want is to be treated humanely,” she says. “Yes, I’m an immigrant and I’m poor, but I’m a human being just as much as my landlord is.”

Charisse Lue, an attorney with the Public Justice Center in Baltimore, who specializes in housing, says that Lara’s case is not an outlier.

“Landlords wouldn’t feel so emboldened to have homes in disrepair if people had more of a choice,” Lue explains. “Moving is expensive, and landlords know that.”

Most landlords ask for two months’ rent as a deposit, plus the first month’s rent, Lue adds, and people are often tied to their neighborhood, whether it’s their “job, transportation, local schools — even language barriers play a role. It’s not easy for people to get up and move.”

A 2019 study published in the American Journal of Sociology explored the burden of housing costs on low-income renters in urban neighborhoods, landlord exploitation and the high profit margins gained by landlords that own properties in those areas.

“Renters in poor neighborhoods are excluded from both home ownership and apartments in middle-class communities on account of their poverty, poor credit, eviction or conviction history, or race (through discrimination),” Princeton University’s Matthew Desmond and the Massachusetts Institute of Technology’s Nathan Wilmers wrote. “Renters are exposed to exploitation on account of their reliance on housing and their lack of options for securing it.”

Joseph Donahue, an attorney with the Donahue Law Firm in Annapolis, Md., and co-counsel in the class action litigation against Arbor Realty Trust, says low-income, especially minority, residents “are kind of stuck. They don’t have many options, even if they’re living in an apartment that’s falling apart around them, like the apartments in Langley Park.”

Arbor Realty Trust Inc. is managed by Arbor Commercial Mortgage LLC, and according to the complaint, Arbor Realty Trust “exerts controlling authority over the co-defendants and subsidiaries,” including Bedford United LLC, Victoria United LLC and others.

The LLC, or limited liability company, model is used by large companies to organize themselves, says Donahue, but also to wall off their business.

“There is often a lot of secrecy behind who owns them,” Donahue says.

When you rent a house, you have to follow landlord-tenant laws, but an LLC is typically a company behind a company and it can skirt those laws, he argues in an interview with NPR and in the complaint.

“I believe they have created a conflict of interest for themselves,” Donahue says, describing the allegations in the complaint. Arbor Realty Trust Inc., a publicly traded company, has a duty to ensure profits for its shareholders, he says, but it also has duties to its tenants under the law.

In describing the complaint, he told NPR, “Arbor has violated their duties to their tenants. It’s profits for nameless shareholders and terrible conditions for folks who live and pay their rent in these properties.”

“My apartment is rat infested, cockroach infested, and there is mold everywhere,” says José González, a 15-year resident at the Bedford and Victoria Station apartment complex.

González, 65, says he suffers from diabetes, high blood pressure and high cholesterol and has breathing difficulties. He often uses supplemental oxygen, he says.

He has stayed put for 15 years “because of the neighborhood. We are all Hispanics here. If you need an onion or salt, I feel comfortable borrowing those from a neighbor. I feel the warmth of El Salvador here.” González came to the U.S. from the small Central American country more than three decades ago.

“We are tired of being neglected, being ignored,” he says. He adds that his community was heavily affected by the pandemic, with many losing jobs and unable to pay rent or buy food. “Hunger and need pushed us to sue the landlord — to say enough. We have never asked for free housing. What we ask for is fair housing conditions.”

The Bedford and Victoria Station complex houses 589 units, built in the 1940s “and never significantly renovated,” according to the complaint, which alleges that living conditions for families have worsened because repairs, rodent infestation and toxic mold have been neglected.

The complaint asks the court to certify the lawsuit as a class action on behalf of all tenants. Donahue, the attorney, says he hopes the litigation sheds light on the practices of investors that, he says, take advantage of low-income, multifamily residential properties such as the one in Langley Park.

“There’s a lot of companies that own properties like this, and they don’t fix them and they squeeze the properties for rent,” he says. “This needs to stop.”