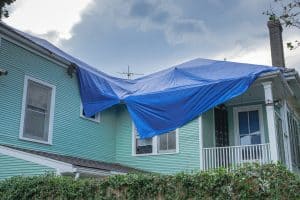 Sylvia Burn warned her landlord multiple times in the last year about the leaks in the ceiling of her Prytania Street apartment, she told The Lens in an interview last week. She moved there in late 2019, at first on a lease. Last year, when her lease ended, she switched to a month-to-month arrangement.

“There had been leaks that I had noticed in all the rooms, starting in about August 2020,” Burn said. It was one of many problems that she said he did not respond to.

“[There were] persistent issues with my kitchen sink being broken, not having hot water during the winter for over two weeks, a gas leak from my stove that made myself and my dog sick, theft that was never addressed,” she said. “[He] never replaced the broken stove even after the leak was reported, the AC unit was broken for several weeks.”

She also had to hire her own exterminator to solve a pest control issue involving squirrels and rats, she said.

But the ceiling was her biggest worry in the days leading up to Hurricane Ida’s landfall on Aug. 29.

On August 27, Burn texted her landlord one last time to ask if he planned to do anything about the ceiling leaks, or board up the windows. He told her it was too late to fix the leaks, which Burn says she informed a property manager about several weeks prior.

“No plans on boarding up… FYI that house during Katrina had nearly 0 damage…so really not to worry,” he texted back.

After it became clear her landlord wasn’t going to secure the apartment, Burn decided to get a hotel room in the Central Business District to ride out the storm.

“Monday morning, I went back after the storm, and the bathroom ceiling had collapsed. Everything in my apartment was waterlogged,” Burn told The Lens.

There was water all over the floor, all the furniture was completely soaked. The ceiling was littered with water stains and water was still dripping on Monday after the storm had passed. The ceiling in the bathroom fell through completely.

“When I told my landlord, he said, ‘Sorry to hear that, but I am going to need you out by the first,’” she said.

“The Fair Housing Action Center receives these calls every week,” he said. “We get them all the time, because the City has no system to ensure safe housing for New Orleanians on a good day.”

And when there’s a storm, minor problems in a rental unit can lead to catastrophes like what Burn experienced.

“Small leaks turn into a deluge during a storm. When your AC is out for multiple days, not only is there dangerous heat but mold grows.” said Ciardullo.

But the state and city lack firm protections to address those kinds of problems in a rental unit, Ciardullo said.

“We have an existing habitability code that the City could enforce, but it doesn’t have the resources to do that with interior violations,” he said. “Most code enforcement complaints are about the exterior of a property and those are obviously easier to inspect.”

Moreover, there are no state or local legal protections for renters who ask for repairs or report a violation.

“In most other states, if you ask for a repair or report a violation and your landlord tries to evict you anytime in the next six months, that is assumed to be retaliation unless the landlord can prove otherwise,” he said. “We have no such law here so most people who report issues get evicted and that has a serious chilling effect. Renters know they don’t have rights here so they don’t report.”

His group has long had a potential fix in mind: a “Healthy Homes Ordinance.”

“A Healthy Homes program, as we envision it, should include both anti-retaliation protections and a proactive inspection system so that the burden of enforcing the law is not on the renter.”

For years, the Fair Housing Action Center, and other housing advocates, pushed for a potential fix: enforceable living standards at rental properties through a Healthy Homes Ordinance.

Prior to becoming New Orleans mayor in 2018, then-City Councilwoman LaToya Cantrell was a vocal advocate for such a law. An ordinance her office worked on — and that she co-sponsored with then-Councilman Jason Williams — would have, among other things, required rental property owners to add their properties to a public database and submit to regular inspections for mold, lack of electricity, broken appliances and damaged walls and ceilings.

But the ordinance never made it to a full council vote.

Cantrell began pushing for the ordinance in 2015. But she tabled it quickly after it was criticized for lacking sufficient details on inspection fees and housing standards. She brought it back again in 2017 — this time with the support of Mayor Mitch Landrieu and Williams’ co-sponsorship.

The proposal managed to pass the council’s Community Development Committee unanimously, with four votes, which is enough to pass to a full council vote. But some council members said they were concerned about the constitutionality of mandatory inspections. In addition, a number of landlords and landlord groups came out against the proposal.

After many delays, it vanished from council agendas without ever going to a full vote, though Cantrell highlighted her support for it in her successful campaign for mayor.

Marjorianna Willman, the director of the city’s Office of Housing Policy and Community Development, said that in spite of the committee vote, not enough council members were willing to support it in a final vote.

Willman said the administration was addressing the problem of substandard housing in other ways, however.

“There is other work that has gone on that supports improved housing quality and availability of affordable housing in the city,” she said.

Willman said that there are 700 affordable housing units currently under construction in New Orleans. She also said that the COVID-19 emergency rental assistance program, which has received around 17,000 applications, has allowed officials to create a database of rental units around the city.

“We know where the renters are living, and we … know who the landlords are,” she said.

“When we provide rental assistance, during that intake process we are talking to those tenants. When tenants say that their units are substandard, we are providing resources so they can go and find another unit.”

At the same time, Willman said that the city is working to identify landlords who need resources to bring their units up to code, and that a program was “in the works” to help get those landlords what they need, though she did not commit to a specific timeframe.

“The program we are looking at would probably start with smaller landlords — some of these mom and pop landlords who are struggling already — and we will make funds available for them to go in and rehab those units. Then, they would commit to keeping those units affordable for a certain period of time. That way we would have those units online and they will be committed to being online for a long period of time.”

Asked if a Healthy Homes ordinance was still a possibility, Willman said, “Yes — I expect that an ordinance like that will be developed, hopefully during the next administration, while we continue to work with the strategies we currently have in place and are developing.”

In the meantime, Hill said, tenants are left vulnerable.

“The fact that we have no system to ensure safe and healthy rental housing is a chronic safety issue on a good day in New Orleans and a life-endangering crisis after a storm like this,” Hill said.

Burn, the woman whose ceiling caved in, left town after Ida and was staying in a hotel in Florida with her two dogs. After she leaves, she plans to stay with family in Chicago.

On September 6, her landlord texted her again to make sure all her belongings were moved out.

Burn’s landlord, who owns several rental properties in the area, did not return repeated requests for comment over the past week. Lacking information on his status after the storm, The Lens has decided not to publish his name.

Friends helped Sylvia do some fundraising on social media to cover the cost of moving whatever possessions of hers hadn’t been totally destroyed into a storage unit. Burn said she hopes to move back to New Orleans, but she’s not sure if it’s realistic.

“I don’t know where I am going to go after this. I wasn’t prepared for the expense,” she said. “As it is now, I dont have the resources to put down a new deposit. Not without assistance from FEMA or something like that.”