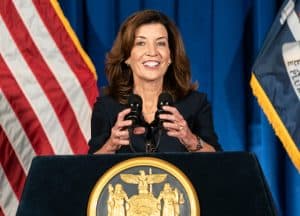 When Kathy Hochul is sworn in as governor next week, she will take over a potential crisis for tenants across the state who were plunged into deep rental debt during the pandemic and have spent months awaiting government relief in vain.

She will inherit a rental assistance program that has been mired in dysfunction under Gov. Andrew Cuomo, distributing relief at a glacial pace and frustrating renters as well as modest landlords who have been unable to keep up with their own bills amid a drop in income.

And, in the absence of sufficient aid reaching tenants and owners, a Supreme Court decision last week blocking a core tenet of the state’s eviction moratorium could accelerate a wave of evictions and a potential spike in homelessness at a time when Covid-19 cases are again on the rise.

“What we’re going to see is people who lost their jobs because the economy tanked … losing their homes,” said Ellen Davidson, a tenant attorney at the Legal Aid Society, warning of the consequences without further state action. “People will fall through the cracks and get evicted, and that includes people who could have been helped by the program if they had known about it and had applied.”

Among Hochul’s first tasks as governor will be speeding up the emergency relief program, which has been beset by logistical problems even after Cuomo announced last month he would streamline the process and commit more state staff to the effort. Lawmakers are also already working on legislation to bring the state’s moratorium in compliance with the court order — and several are pushing additional legislation to extend the moratorium past Aug. 31, when it’s currently set to expire.

“I look forward to working with the Legislature to quickly address the Supreme Court’s decision and strengthen the eviction moratorium legislation,” Hochul said in a statement Thursday night following the ruling. “I will work with our partners in the Legislature to help get the funding available to those in need as soon as possible.”

Cea Weaver, a prominent tenant activist and campaign coordinator for Housing Justice for All, said the court order means landlords can begin filing eviction cases and a hearing could take place as soon as two weeks following that. Modifying and extending the moratorium, and speeding the distribution of rental aid will be Hochul’s “first test” in office, Weaver said.

“She will take over two days before an eviction hearing can possibly happen, so that means if they do this right, she can take over with this bill on her desk and it can be the first thing she does and set the tone,” Weaver said in a recent interview. “Or, it can not.”

The Supreme Court order blocked the provision of the eviction ban that allows tenants to self-certify that they’re experiencing economic hardship because of the pandemic. The court signaled the law likely wasn’t constitutional because there is no way for a landlord to contest the hardship declarations.

Meanwhile, the state had distributed just $100 million of the $2.6 billion committed to the rent relief effort as of last week, according to the Office of Temporary and Disability Assistance, which is issuing the funds. The program has been bogged down by persistent technical problems within the application portal that have made it exceedingly difficult for many tenants and landlords to apply. Michael Hein, commissioner of OTDA, said at a hearing last week “there’s no chance” all of the aid will be distributed by the end of August.

The relief program protects tenants with pending applications from an eviction proceeding, but advocates have raised concerns that the program is not functioning well enough for that to be a reliable safeguard. The Biden administration’s new eviction ban also offers protection against eviction for some New York tenants, but it’s less broad in scope than the state’s moratorium and is also facing legal challenges.

“I would love to be proven wrong and nobody get evicted because of the existing protections,” said state Sen. Brian Kavanagh, chair of the body’s housing committee. “But I am very worried that … whatever those protections are, the undermining of the eviction moratorium is going to result in significant numbers of evictions.”

Tenant groups have been holding rallies calling for the extension of the moratorium and a swifter distribution of aid. Since last week, they’ve started directing their actions at Hochul.

“Governor Kathy Hochul can finally turn the page on #CuomosHousingCrisis,” the Housing Justice for All coalition recently wrote on Twitter.

Many activists have long regarded Cuomo as an obstacle to their biggest legislative priorities. In the lead-up to landmark reforms to the state’s rent regulation system in 2019, tenant groups wrote to state legislative leaders urging them to leave Cuomo out of negotiations on the bill, fearing his involvement would weaken potential changes. (In a comment responding to a letter from tenant groups at the time, a Cuomo spokesperson called it “garbage” and claimed activists don’t “have the first clue about how state government works.” State Senate Majority Leader Andrea Stewart-Cousins and Assembly Speaker Carl Heastie did ultimately negotiate a deal without the governor.)

Activists are hopeful Hochul will be more receptive as she eyes a full term next year.

“If she has any hope of winning the Democratic primary next year, she has to be aware of the tenant vote and she really needs to show she’s sensitive to our needs,” said Michael McKee, treasurer of TenantsPAC and a longtime activist heavily involved in the 2019 reforms. Without swift action from Hochul and the Legislature, he said, “I think you’re going to have a nightmare scenario on your hands.”

Landlord groups, meanwhile, say their members are also increasingly desperate for aid, and note owners have not gotten relief on other costs they’ve had to keep up with, such as water bills and property taxes.

“I would suggest the incoming acting governor not wait until the actual day of transfer but rather get involved immediately because this is going to be one of the hot potato issues she’ll have to address right away,” said Joseph Strasburg, head of the Rent Stabilization Association.

If the state doesn’t distribute a certain amount of aid before the end of September, it risks the federal government clawing back unused funds. Strasburg suggested the deadline be relaxed given the governor’s resignation and the upcoming change in leadership.

“I would advise [Hochul] to also reach out to the White House and indicate that because of the unusual circumstances of government in the state of New York and the chaos that has happened in the last 72 hours … to allow the state of New York to have a grace period to deal with what is happening,” he said last week.

He also questioned the notion that landlords will be rushing to evict tenants who were legitimately hurt by Covid-19 and are awaiting aid.

“Owners just want what they were promised as part of the legislation. Housing court is the last place any owner in their right mind wants to be in,” Strasburg said. Extending a broad moratorium on evictions due to rent relief delays would mean “owners are being punished for the failure of government to have done what they should have done initially.”

Davidson noted it’s not the first time the state has either struggled to get money out the door, or funding has been held up under Cuomo.

The governor was well known for holding up funding he previously committed — such as a bucket of public housing funding he held onto for years after promising it. Meanwhile, a much smaller $100 million rent relief program run by the state’s housing agency last year ultimately failed to distribute all of its available funds.

“This is yet another program New York state has run poorly,” Davidson said.

Read more
Mold in Rentals:...
Learn about your landlord's liability for mold problems, how to get rid of mold, and how to...
Read more
How to Handle...
As a landlord, it is your priority to protect both yourself and your property when choosing to rent it...
Read more
Renters strike back as...
The revival of rent control policies long derided by economists, including one of President Joe...
Read more
Will the Housing Market...
Will the market stay hot or will things cool off? Here are expert projections on the 2022 housing...
Read more
Post-Covid Market...
Just as students are growing more desperate for campus housing with some resorting to live in vans or...
Read more
Here’s How...
Luxury Revamp in West Hollywood Will See New Residential Units Replace Storage, Laundry Areas Parking...
Read more
What to Know About...
The New York City Council passed a bill last week requiring homes listed on short-term rental sites...
Read more
Multifamily Investors...
A perfect storm of macroeconomic and real estate-specific forces are making multifamily investors...